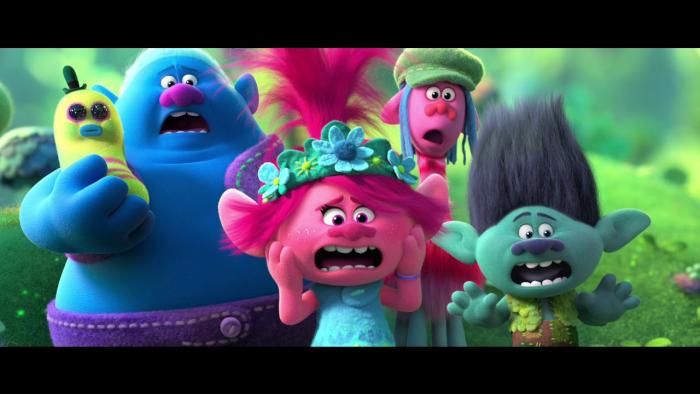 I watched Trolls World Tour on Sunday night, which I feel should raise a lot of “but why though?” questions for both of us. Given that I have no children, and no love for high school musical-ed versions of ’80s rock songs, why though would I watch it in the first place? That one’s easy: the McElroy Brothers were there. I love the McElroy’s, I love all of their (dumb and not) podcasts, and I was particularly impressed when they managed to secret their way into a major cartoon franchise by starting a joke podcast while stoned in Oregon (weed is legal there). So once it came to pass not that The McElroy Brothers Will Be In Trolls 2 but The McElroy Brothers Were In Trolls World Tour, I had to be the one to watch this giant pile of junk.

Why make this specific movie? The plot doesn’t matter too much as it’s mostly an excuse to show of different genres of music, but basically:

— Trolls used to all have one magic guitar with six strings that represent the six kinds of music (there are only six, and they’re all ones you find in America)

— Queen Poppy’s all over it. Happily Ever After. Until The Third Movie.

The really important part of Trolls World Tour is The Lesson. And The Lesson, almost verbatim, is “talking with people who have different opinions from you is a good thing. You don’t have to agree on everything to like each other.” This is where the second ‘but why?’ though comes up. But why would we continue to teach the same oversimplified, useless lesson over and over to children? Saying, “talk to people you disagree with” is wildly unsuitable. Yes, it’s clearly fine and a good thing when talking about the kinds of music you like, but not when you’re talking about things like if gay people are people and if saving the economy “as is” is more important than a few hundred thousand lives. There are some things that are up for debate (who’s the best drummer of all time, which version of “All Along The Watchtower” is best, exactly why Phish sucks so bad), but some things aren’t up for debate because maybe you’ll end up taking hydroxychloroquine and dying. It’s a significantly more nuanced lesson about being a discerning partner in a good-faith debate and shouldn’t be packaged as a troll’s (punintentional) talking point. Especially considering that the movie is built around the idea of telling kids that hating each other for their musical and cultural choices is a bad thing.

So but why, though? I’m not saying that kids should think hating others for their musical and cultural choices is a good thing, I’m saying do we need to teach them that lesson? During the “emotional” climax of the movie (and seriously, one of the worst songs I’ve ever heard in my life), I couldn’t help thinking about an old Sarah Silverman joke.

Stop telling girls they can be anything they want when they grow up. I think it’s a mistake. Not because they can’t, but because it never would have occurred to them they couldn’t.

Us: Children, don’t hate people just because they listen to country music instead of techno.
Children: Is that a thing?

I mean, maybe back during The Breakfast Club years, but not necessarily now? My youngest brother is twelve years younger than I am. So when he started high school, I warned him not to get tricked about smoker’s corner. He, justifiably, didn’t know what the goddamn I was talking about. So I explained that there’s a designated corner just off of school property where all of the smokers gathered before school to have a cigarette before class, and some people like to tell the freshman that smoker’s corner is a different one so they stand on a corner by themselves like an asshole. He was baffled. Because this was in 2008 so they didn’t let anyone smoke anywhere, but they especially didn’t let high school students smoke before school at school. I was trying to teach him a valuable lesson for a thing that totally wasn’t a thing anymore. I inadvertently taught him that if he was ever looking for cigarettes, he should check with the kids at the northeast corner of New York and Commonwealth. If we’re going to be intent on passing along our collective knowledge to younger generations, we should probably teach them the lessons they need rather than just the ones we know is what I’m saying.

So, yeah, this did not turn out to be the McElroy centric post I wanted it to. Because one of the lessons that Trolls World Tour didn’t mean to teach but did was “maybe you shouldn’t think so hard about a kid’s movie, Em.” But I also learned on my own that I can make up for the lack of McElroy content by leaving this clip from last week’s show because. Honestly, it’s just some of the wildest shit I’ve ever heard.