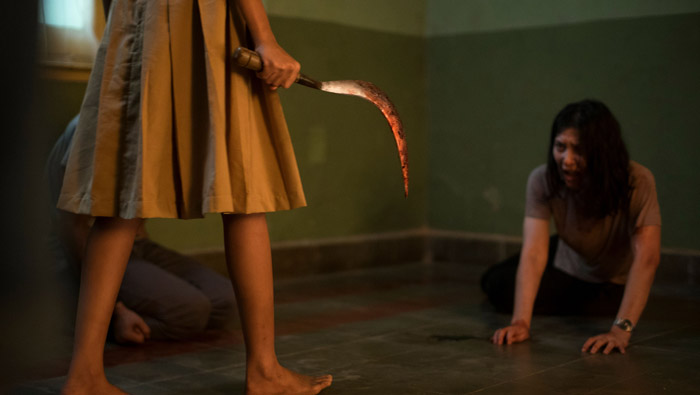 The Queen of Black Magic begins with a cozy scene familiar to horror: a family car trip to some far-off location. Sometimes it’s to a vacation house, like in Us. Sometimes it’s to a new home, like in Pet Sematary. Here, it’s to pay respect to a past that might have been better off left buried. In each case, it is the calm before a sinister storm.

Nowadays, Hanif (Ario Bayu) is a successful family man, living the good life in Jakarta. He has an adoring wife named Nadya (Hannah Al Rashid) and three smart and spirited children. All of whom, he’s steering back to his humble beginnings, an orphanage far from good cell reception, hospitals, and police stations. Reuniting with his childhood friends Anton (Tanta Ginting) and Jefri (Miller Khan), he’s returned to pay respects to gravely ill Mr. Bani (Yayu A.W. Unru), the kindly old man who raised them and many more orphans. But before they even pull up to the sunny yellow house, there will be blood that proves an ominous omen.

Dread brews as the family of five are greeted by cryptic caretakers and a pair of eerily stoic orphans. While the grown-ups reminisce, the children flirt, frolic, and share creepy legends about this unusual place. The youngest, Haqi (Muzakki Ramdhan), is dangerously curious, asking questions that make the grown-ups quiver. Why are all the photos in an album flipped backwards, so the faces in their images are hidden? Why does no one go beyond the green door? What lies beyond? Who is Mrs. Mirah and why does mention of her make his father react as if he’s seen a ghost?

The answers will be revealed in slippery sequences of gruesome mutilation, powerful possession, sickening scares, and dark revelations. Director Kimo Stamboel builds tension within a chokingly claustrophobic setting, pulling his audience to the edge of their seat, then throwing them back in repulsion over body horror bits. Employing superbly executed effects (some visual some practical), he rips away any sense of safety by reducing each grown-up into a yowling, bloody horror show centerpiece. The first of these involves a mirror and body dysmorphia. It delivers a scare so sleek and smartly realized, that my jaw dropped in shock then howled in awe. But the best comes for poor little Haqi, who stumbles into J-Horror tropes with the help of a sputtering VHS tape and a jump scare you know is coming but can’t help but scream over. Seriously, this section had me shouting “No no no!” in anticipation, then covering my eyes, peeking between my fingers, and pleading for the scare to just come and set me free of this body-racking tension!

The script from Joko Anwar (Satan’s Slaves, Impetrigore - both on Shudder) doesn’t bind us to one character’s journey or even feel remotely interested in picking a protagonist. As such, the story feels frighteningly unmoored, pulling us into dark rooms, trembling fields, and terrible traps without warning. This leaves several characters feeling thinly realized, being sketches of insecurity, haughtiness, or simply sidekicks set up for slaughter. However, Anwar grants Haqi enough screentime for the charming boy to become a familiar little brother, pesky but playful and sweet. So, our concern for him grounds the emotional stakes.

Stamboel weaves scares from haunted house horror with nauseating gory gags and witchy bits promised by the title to make a scary movie that’s a real knockout. However, deep cut fans might think all this sounds a bit familiar. Well, it is.

This is a reboot of Liliek Sudjio’s 1981 cult class, also named The Queen of Black Magic (or Ratu Ilmu Hitam in its native Indonesia). Here’s where I woefully confess I’ve never seen the original, and so can’t compare the two. However, the filmmakers invite you to by filling the end credits with images of the original. The stills suggest the ‘81 version that terrified on VHS was more theatrical than realistic in its performances, its grisly effects less sophisticated in their renderings. Still, you can see the bones that built this savagely satisfying horror movie. So, we’re left not only with chills, but also the wish to track down the ‘81 version too. Perhaps Shudder will offer it too?

The Queen of Black Magic premieres exclusively on Shudder on January 28.

← Reddit Asks the Question: 'Visitors To America, What Was Your Favourite Food Experience There?' | Did The MCU Condition Their Audience To Not Accept Change? →