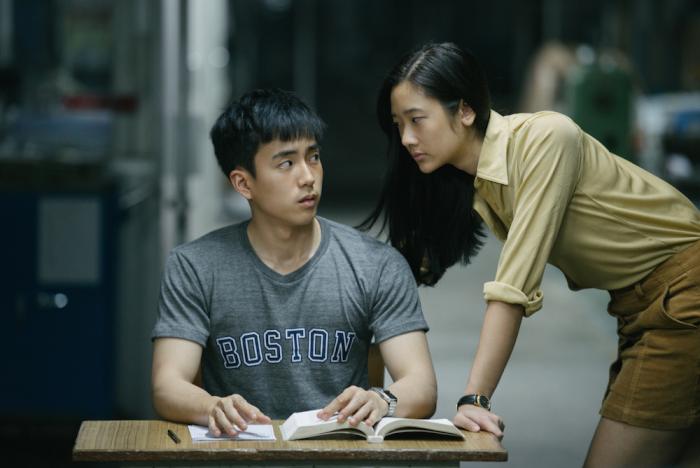 We’ve seen test-cheating teen dramas before, but never with as much verve and wit as in Thailand’s Bad Genius. Director Nattawut Poonpiriya embraces the over-amped emotions of angst, excitement and anxiety that rattle about the high schoolers at the center of this cunning crime caper, and parodies the style of sleek Hollywood thrillers to perfectly capture that intensity. Which cleverly allows audiences to look back and laugh at the days where the results of an exam really felt like life or death.

Chutimon Chuengcharoensukying stars as Lynn, a brilliant girl who enters an elite academy on a merit scholarship. She strives to be the upstanding person that her poor but loving father sees her as. But when her rich but ditzy bestie Grace (Eisaya Hosuwan) panics on an exam, Lynn offers the answers, making a bad decision that will lead her down a path to selling answers, an elaborate music-based cheating system, and ultimately a ludicrous and fabulous finale in Sidney, Australia.

The film begins in stoic and still close-ups, a batch of teen stereotypes defending themselves against an unseen/unheard interrogator. Guarded but civil, Lynn insists she’s a good girl who’s always been smart. Why would she cheat? Pretty and popular Grace confesses she’s not bright, but offers earnestly that she’s “good at extra-curriculars!” Dreamy, posh, and smug, Pat (Teeradon Supapunpinyo) is Grace’s boyfriend, who’s never met a problem he couldn’t buy his way out of. Lastly, sloppy and smart loner Bank (Chanon Santinatornkul) shrugs off the unspoken accusation, saying he’s not even friends with the rest. Why would he risk his future to help them cheat?

With this tantalizing setup, Bad Genius dives back to Lynn’s first days of school, leading us to the pivotal day when she scribbled multiple choice answers on an eraser. Instead of just delicately dropping this teeny cheat sheet on Grace’s desk, the film kicks comedy and exhilaration into high gear, treating the passing of the eraser like an elaborate Mission: Impossible stunt. First, Lynn signals silently for Grace to watch the eraser. Their eyes dart to the teacher, who might catch them if he wasn’t so snoozy. Then, Lynn carefully removes her right shoe, a uniform Mary Jane that matches Grace’s exactly. With precision, she drops the eraser into the cavern of the empty shoe, then gracefully kicks it backwards, where Grace catches it between her two feet with a rush of relief.

As the score whooshed with enthusiasm as if the pair had narrowly cheated death, the audience at Fantasia International Film Fesitval broke out into giddy applause. But the genius comedy of high drama and low stakes was not over yet.

Grace removes her foot from her right shoe. However, when she kicks it forward to cover her friend’s conspicuously bare foot, she fumbles! The Mary Jane flops out from under the row of desks to the center of the aisle, daring to be discovered! Grace’s face streaks with panic. The moviegoers gasped en masse! But Lynn, ever the cool-headed maverick, rises with her test paper, walks toward the teacher’s desk and nimbly slides her foot into the stray shoe, as Grace scrambles to claim the eraser. Cheers. There were genuine, full-throated cheers bursting forth throughout the theater, and from me. But this is not even Bad Genius’s best “action” sequence, just its first.

This bitingly brilliant teen movie is deliciously clever and laugh-out-loud funny, offering parody thrills and acute observational humor. When Lynn wields a pencil, the cheeky sound design employs a gun-cocking sound effect. When her father nearly discovers her cheating conspiracy, good at extra-curriculars Grace bursts forth with a lie that her bestie’s secret is a boyfriend. And the blushing dad backs off. All the way, the audience went wild.

The performances here are pitch-perfect. Though Lynn is often steely, Chuengcharoensukying has a striking presence that brings a spark to every sly glance and subtle smirk of her intelligent introvert. By contrast, Hosuwan is her excitable foil, radiant with energy, her countenance so emotive she risks becoming a full-on—but always charming—cartoon. Supapunpinyo brings a bit of menace as the selfish and stupid Pat, his blend of arrogance and doofiness making a descendant of James Spader ’80s bad boys, and a marvelous enabler to the group’s mounting schemes. Lastly, Santinatornkul brings a wounded quality to his hard-working honor student, making hearts break when he’s pushed to the point of joining Lynn’s ambitious and outrageous plan.

Then beyond all this fun and teen angst, Poonpiriya laces a nuanced message about privilege. All the way, the poor kids (Lynn and Bank) are working hard to get access to higher education, which the rich kids (Grace and Pat) will be handed with the ease of a weekly allowance. Money is the great divider here. So when Lynn has the chance to make some from her wealthy dum-dum classmates, who could blame her from cashing in? But by breaking the rules, she’s playing a game that always lets these lackadaisical dolts succeed solely because of their wealth. For them, there are no consequences. But as consequences crash home for Bank and Lynn, Bad Genius turns to challenge them and the audience to consider a new, harder, but maybe better alternative.

Bad Genius is currently on Netflix