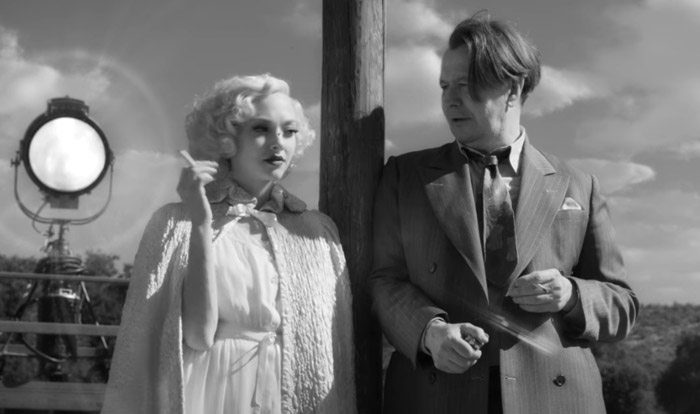 Now On Netflix: 'Mank' Is The Shadow of a Shadow of Another's Person's Dream

A blank page in front of any writer is two-faced, flip-sided—nothing but possibility and the possibility of nothing. It’s beautiful and terrifying. It’s outer-space and inner-demons, a canvass of void. It can hollow you out, turn you inside, spill you everywhere. It’ll kill you and phoenix you after, the flames of maybe eventually twenty-four frames per second turning your deepest sometimes-darkest thoughts into glittering, golden, eternal movie magic. Those words, they can outlive you. You could sit down and pound out your own Citizen Kane, for god’s sake! David Fincher’s Mank is about the writer who did just that.

Herman J. Mankiewicz (a soused and self-amused Gary Oldman) was his name. To the film historians, I’ll leave the argument over who wrote just what of what, Mankiewicz or the wonder-boy director Orson Welles. Mank the movie comes down on Mank the man and almost solely down on Mank, with the Orson (an uncanny Tom Burke) as a distant buzzing sound at its edges, and we’ll run with that for this review’s sake. Either way, a studio handed these big brains carte blanche, all the money, time, and the freedom to do with those blank pages whatever they wanted. Mank is a movie about the striking of each and every one of those keys.

Not the letter side of the keys, mind you. There’s very little here about the As through Zs of what Citizen Kane the finished product turned out to be; we don’t even see a dollop of the partially finished story. There are no recreations of Welles’ camera backing through a window-pane from a snowy white field and into the film history books. There is no actor playing Joseph Cotten’s mustache-handler (somewhat to my chagrin). We do get a dirty joke about Rosebud, but that’s about it. Instead, Mank is about the under-stems of those typewriter keys, traveling back to this story’s disparate and scattered origins; it’s about what Kane’s about without being much about Kane.

That is to say, Mank is about watching Oldman, playing Mankiewicz through a lizard-tongued haze of brown liquor and instantaneous regrets, wrangling and wrestling with the stormclouds of his surroundings, trying to cram everything he thinks about everything down into a two-hour container. To stuff life’s haphazard genie back into the bottle, shake it vigorously, and then pour it down our throats. And so we see Mank rub up against the political and economical forces of his age, his thoughts on the haves and the have-nots what have you (not so different from our own, funny enough). We see Mank meet and commingle with the origins of the thinly veiled characters he’ll come to craft. Specifically, our Kane, a twinklingly terrifying Charles Dance, all twenty feet and ten pounds of him, playing the newspaper magnate William Randolph Hearst as a sharp black shadow dancing on a cavernous mansion’s wall.

Even more importantly we and he meet Hearst’s mistress, A.K.A. Mank’s in, a silvery cotton-candy cloud of Marion Davies. Played by Amanda Seyfried — never better than here—she’s lassoing no-bullshit Brooklynese into real true larger-than-the-heavens movie-star magic. Mank (the movie) is never more alive and lustrous than when she’s on-screen and deftly, bemusedly challenging Mank the man. Their long saunter across Hearst’s ridiculous monkey-palace grounds, a surreal spectacle dreamed up under day-for-night moonlight, is the movie’s grandest moment by far. (Erik Messerschmidt’s cinematography is never not exquisite, but everybody and the set-dresser springs to life when Seyfried comes to play.)

It’s hard to find any precise fault with Mank, at least in its making. Messerschmidt shoots the hell out of it, Fincher directs the hell out of it, his actors act, his costumers costume, the score from Ross & Reznor bridges the now with the-century-back with surprising vistas of sound. David Fincher’s past pops and Mank screenwriter, Jack Fincher, pounded out some whizz-bang poetry of his own. What a glory to listen to his dialogue, real dialogue, movie movie dialogue that snaps and crackles with word-play, politics, and old-fashioned razzle-dazzle. I could have listened to these people talk on top of each other all day long.

So why did I remain so wildly unmoved by it, in its end? Perhaps it’s the remove of it all, the shadow of a shadow of another’s person’s dream. Mank never felt right there right at my fingertips. It’s always somebody else’s story: David Fincher’s story of his father’s story of Mank’s story of Kane’s story of Hearst’s story. Citizen Kane of course revolutionized this nesting doll sort of structure, but Mank is not and was never going to be Citizen Kane. We already have Citizen Kane. Mank is an abundant and luxurious recreation of a time and place that never truly was, a cinema dream of a cinema dream of a cinema dream that it’s always somebody else that seems to be having. No matter how good the story-teller these second-hand dreams will make for a distant fiction.