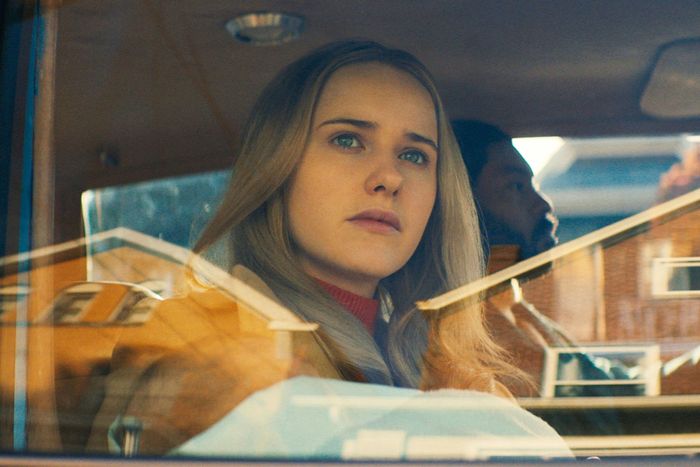 In Theaters: 'I'm Your Woman' Takes Gangster Movies To A Fiercely Female Place

Crime movies are often about getting away with something, be it a heist, a murder, or a cover-up. However, in I’m Your Woman, Julia’s Hart’s much-anticipated follow-up to her sensational directorial debut Fast Color, the journey is chiefly one of discovery.

Co-written by Hart and her husband Jordan Horowitz, I’m Your Woman stars The Marvelous Mrs. Maisel’s Rachel Brosnahan as Jean, a glamorous gal introduced lounging in her backyard, a cigarette resting in her elegant fingers, a violently fuschia and provocatively sheer robe cascading across her. It’s a scene that suggests Jean is a woman of means, leisure, and style. She is. But she’s not content. In this moment, it’s because a forgotten price tag is breaking the spell of this seeming perfection. Unknowingly, she takes us on a hasty tour of her beautiful home, fresh in ’70s decor of geometric patterns and bold colors. She’s scrounging for scissors, and seems out of sorts, settling on a knife. Perched on her kitchen counter, Jane haphazardly hacks at the tag, as her man comes in. Without looking up, she asks Eddie where the scissors might be, and then she sees not only him, but a beautiful little baby too.

“Who is that?” She says, an uncertain edge in her tone. Eddie (a rakishly handsome Bill Heck) says it’s their baby, then hands the plump child off as if it were another bauble like the elegant robe and the impressive house. This baby is a gift, wrapped up in an unspoken apology. For what exactly, Jean won’t confess to Eddie. There’ll be no time. In the blink of an eye, she goes from new mom to on-the-run, as her shady husband is a professional thief who has crossed the wrong crook. We’ve barely gotten to know Jean and her surroundings before she’s pitched out of them, with nothing but her baby and $200,000 in a duffle bag. This precarious bundle is delivered to Cal (Arinzé Kene), a stoic Black man who has a mysterious connection to her husband. He is now the only soul in the world Jean can trust.

While Jean’s story is one of escape, Hart and Horowitz’s focus is on her evolution as a person. As in Fast Color, the flair of genre conventions gives a swiftly familiar and exciting setting, in which Hart’s gift for intimate character portraits can be explored. This time instead of superpowers and a dystopian desert, her heroine is caught up in a world of violent gangsters, smirking thugs, and the secrets of the husband she didn’t really know at all. Of course, Jean is interested in the whys and hows of her situation, but I’m Your Woman isn’t. The mystery is not who Eddie was before he met Jean, but who she might become away from Eddie.

At the start, Hart gives us just a bit of romantic voiceover, then the scene described up top. When the inciting incident crashes in as a shady friend in the night, Jean as a character seems vague, which is because she is—even to herself. A beautiful woman with a husband and a house, she floated around the both like a visitor. The search for the scissors a visual clue that she’s unmoored. The distance between she and Eddie when he introduces her son is literal alone. As soon as baby Harry is placed in her arms, we see a shift in Jean. Her body becomes grounded by the weight of him, the weight of the responsibility of motherhood. She looks at him like he is a treasure she doesn’t deserve, but will not give up. So, in the face of uncertainty, violence, and strange allies, she will do whatever she can to protect him.

Amid the big drama, Hart weaves in quiet but crucial beats likely born from her own experiences as a mother. An exhausted Jean struggling to make a meal for herself in those precious moments when the baby is asleep. Once more, Hart and Horowitz’s script speaks in subtle visuals. A broken yolk in the pan is a snarling signal to Jean that she is a fraud and a failure. She doesn’t speak about how she fears she’s not woman enough to be a mother or a homemaker. How could she? There’s no one around to talk to. So, she pitches those damn, mocking eggs right at the kitchen wall.

As the manhunt for her heats up, she’ll be pitched from one safe house to another, along the way getting closer to Cal, despite his steely demeanor. She also befriends Teri (the magnificent Marsha Stephanie Blake), who strides onto the scene as a foil, a promise, and a threat all at once. Together, they explore what it means to be a good mom in a world overrun by reckless men like Eddie. However, Hart is too smart to senselessly veer into fantastical revenge scenarios that’d turn uncertain Jean into some unflappable femme fatale. The struggle, the shakiness in her voice and hands, is the story, one sophisticated, poignant, and frantically authentic.

Hart confidently establishes this ’70s world of crime, that’s crackling with tacky patterned wallpaper, sneering tertiary characters, blue-collar accents, and suspense steeped in streetlights, shadows, and hard stare of a hardened heroine. It’s easy to imagine Jean’s story having branched off of films like Goodfellas or Scarface, one of the many wives lured in by the charming bad boy, then lost among his lies. While the women have long been scintillating supporting characters in the gangster subgenre, Hart’s film shows their stories could stand on their own. As Jean will learn, who needs an Eddie?

Moody, nuanced, and moving, I’m Your Woman is a crime drama that deserves to be discovered. Hart once more delivers a methodical pace that’s poetic, accompanied by fascinating characters, and a stellar ensemble. Blake is a stunner, whether she’s lending a shoulder to lean on or busting balls at old haunts. Kene rolls onto the scene with intensity in a strong stride. Yet the soft side of Cal bleeds through when he’s joking with Jean over coffee, and comforting her teething child. Each offers a richness that suggests Hart could easily make a spinoff for these supporting characters. Then, there’s Brosnan.

The radiant smile of Mrs. Maisel is lost below a furrowed brow. Her mouth is instead agape in speechless shock. A Brooklyn-baked accent gives Jean the implication of street smarts, but her bewildered expression suggests years of spoiling have made her soft. But she’s not slow or simple. Flashing eyes and a sharpening physicality point us to a violent climax, earned and exciting. From this, rises a woman who isn’t defined as solely as someone’s wife or mother, but a heroine in her own damn story.

I’m Your Woman is now in select theaters. It will hit Prime Video on December 11, worldwide.

← In Defense Of Harper, The Apparent Monster of 'Happiest Season' | Jason Bateman (and Bowen Yang) Quietly Deliver the Best 'SNL' of the Season, So Far →