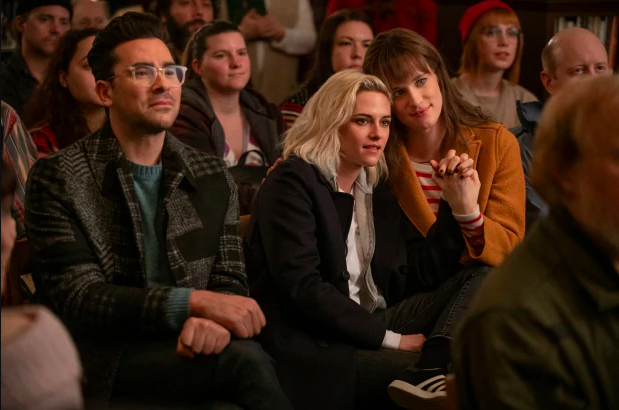 The holiday rom-com has long been a delightfully daffy and doggedly heteronormative affair, festooned in festive flare, bedecked with hilarious hijinks, and topped with some tender moments. Now, Christmas just got gay(er), thanks to the lesbian-centered romantic comedy Happiest Season, which stars Mackenzie Davis and Kristen Stewart.

Inspired by her own experiences, Clea DuVall co-wrote and directed this charming story of a lesbian couple, whose relationship is strained when family and politics come into the picture. With her parents long dead, Abby (Stewart) has never been much for Yuletide revelry, but her girlfriend Harper (Davis) goes gaga over the lights, traditions, and family merriment. So, this year, she urges Abby to come with her to visit her parents and sisters in a cozy—or claustrophobic—town a long drive from their Pittsburgh home. This seems a big step for the couple, and one Abby is eager to take. However, there’s a hiccup: Harper’s family doesn’t know she’s gay.

A lesbian herself, DuVall doesn’t treat this coming-out arc with the woe-is-me energy often associated with such stories. Instead, she keeps true to the lighthearted tone expected of holiday rom-coms. As such, the stakes aren’t heartbreakingly high. Parents Ted and Tipper (Victor Garber and Mary Steenburgen) aren’t bible-thumping homophobes, who might disown her over this revelation. However, they are those intense parents who demand perfection from their children and don’t handle disappointment well. Making that point crystal clear is Jane (Mary Holland, Happiest Season’s co-writer). While her parents are posh, reserved, and focused on being picture-perfect, the middle child, who is thanklessly expected to be their IT guy and whipping boy, is emotional, eccentric, and doesn’t care who knows it. She wears funky outfits, jabbers on about the fantasy world of the novel she’s been writing for a decade, and hugs firmly and maybe too long. For these crimes, her mother and father issue side-eye and scorn, over and over.

Making matters even more intense is Harper’s oldest sister, Sloane (Alison Brie), who is endlessly snarky, and fiercely competitive for their father’s approval. As Ted’s running for mayor, maintaining a pristine family image has taken on an even greater significance, so it’s easy to see why Harper is so determined to hide her truth. However, the story is centered on Abby, who suffers because she’s forced into the closet too. Sometimes literally!

While the family is all clicking back into their assigned roles for better or deeply toxic, Abby is left out. She’s not the girlfriend but the “orphan roommate,” to be pitied and resented for intruding on family time. Thankfully for her, she’s got a friend she can always call. Thankfully for us, he’s played by Schitt’s Creek’s Dan Levy, and is basically David Rose with a slightly softer edge. Levy is essentially the Rupert Everett to Stewart’s Julia Roberts, providing advice, delivering withering remarks, sharp jokes, and deeply loyal support in thorough My Best Friend’s Wedding style. He’s not the only ally Abby finds, as Harper’s ex, Riley (Aubrey Plaza), proves a shoulder to sulk on as well as a tour guide to this small town’s quietly queer community.

One of the joys of watching Happiest Season is how DuVall and her cast (several of whom are LGBTQA+) casually celebrate the LGBTQA+ community. It’s presented in fashion, humor, support, and even a drag show featuring Drag Race stars Jinkx Monsoon and BenDeLaCreme! DuVall doesn’t treat these experiences or this culture as exotic, thereby othering it. It’s just matter-of-fact and all the more radiant because of that. They’re here, they’re queer and they’re fabulous!

While coming out, fear of homophobic ostracization and gay romance is all centered in Happiest Season. It’s also a story that could speak to anyone who’s ever felt like they have to perform for their family. DuVall shows great empathy for that struggle through the sisters’ story. We see Harper happy and gay in Pittsburgh, kissing Abby in alleyways and comfortable cuddling her in their home. Then, at her childhood home, she’s reduced to sneaking around, hiding literally and metaphorically, and hurting her lover to do so. Harper is trying to fit in a box that no longer fits her, and the pressure of it is breaking her and her relationship with her family as well as Abby. Her sisters both know this pain, which comes out in a combative climax.

Holland and DuVall did the work in creating a family that feels authentic in their complications and quirks. Little details like precisely maintained childhood bedrooms, backhanded mom remarks, and the hasty shorthand born from countless conversations over the kitchen table spark—to the point where it’s easy to understand how Abby can feel overwhelmed by it all. Yet, at its core, Happiest Season is like so many holiday movies that came before, reminding us that it’s not the Christmas card family photo, or the White Elephant party, or the gifts you receive that matter. It’s family, the one you grew up with and the one you chose.

Admittedly, Happiest Season doesn’t move as smoothly as the best of the subgenre. It wobbles with some subpar sequences, including an ice rink race that has little payoff, and there are a few too many characters that feel stuffed in without cause. However, it’s overstuffed with loveliness. The jokes have a pop and sizzle that plays perfectly in this holiday terrain, ranging from salty to sweet, but never outright mean. The story is heartwarming and steadily hilarious, with several setups that have Stewart well-placed as a flustered straight man (as it were). Then, there’s the cast as a whole. They are glorious.

Steenburgen has decades of comedic craft under her belt, and uses them to turn a real mother into a devastatingly funny diva. Garber brings warmth, while Brie brings an ice-cold attitude. Plaza is sultry and tender, while Levy is an unapologetic scene-stealer, bursting with mischief and charm. Holland is hilarious and unexpectedly poignant as the family’s designated weirdo. Davis deftly maneuvers Harper’s code-switching with nuance and a trembling tension, while Stewart is vulnerable, silly, and totally game to play her fool for love.

All in all, Happiest Season is an utter delight. Make it a part of your holiday.


← Review: Jeez, 'Stardust,' What Did David Bowie Do To You To Deserve a Biopic This Lackluster? | Twitter Reacts to #DiaperDon in 'Big Man, Little Desk' →