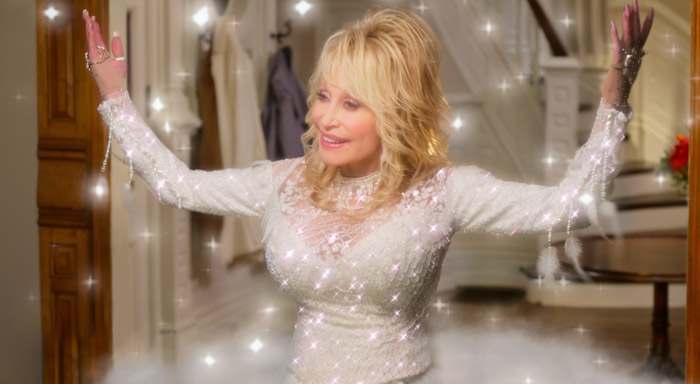 Taking some time off from her busy “being an actual guardian angel to the entire human race” gig—you know the one where she funded a COVID-19 vaccine and donated over 100 million books to children through her Imagination Library among too many other philanthropic deeds to count—Dolly Parton is dipping back into her original gigs and gifting us with some acting and music this holiday season. They come in the form of a Christmas album, already out and delightfully titled A Holly Dolly Christmas, and one hundred straight minutes of boisterous holiday cheer in the Christmas movie, titled Dolly Parton’s Christmas on the Square. Put on your favorite ugly spangled holiday sweater, get a little tipsy on the nog, and settle in because Dolly’s got this.

Directed and choreographed by Debbie Allen (THE Debbie Allen!), Christmas on the Squarecasts Dolly as an angel. She already had the wings, she already had the rhinestones glued along each and every feather. You might as well work with what you got. (Pretty sure that’s an old Dolly-ism.) Dolly’s angel—named Angel—first appears as a tattered beggar in the titular Square, although even her beggar’s rags seem to be made out of expensively soft swaddling fabrics. Such snug homelessness! This is typical of the film, in which even the darkest of material and intentions is delivered with a cinnamon coziness. A terrifying accident at the film’s midpoint leads to the world’s coziest-looking neckbrace. You don’t need to be too afraid on Dolly’s watch. She covers the floor with pillows before you can fall.

Angel has arrived there on the central stoop of the peppermint hamlet called Prairie View, Kansas, in order to talk some sense into the town’s “mean old witch” of an owner Regina Fuller (Christine Baranski). Think Mrs. Deagle from Gremlins, but with a tumbler of scotch. Regina grew up in Prairie View but (gasp!) moved away to a penthouse in New York (double gasp!) and brooks no comfort from this small town egalitarian evangelism. She has breezed back in right before the holidays with armfuls of eviction notices for every boy and every girl, tied up in red ribbon and string. It’s get in, get out, drag the deeds away with her by hook or by crook. If she can plow her way through all the singing and dancing, anyway.

Meanwhile, the people of Prairie View seem to be putting on a non-stop Old Navy commercial down around the central gazebo, and all that cheer and glitter is bound to get in her way. And that’s before she even bumps into her old flame Carl (Treat Williams, reminding us he got his start with Hair), her put-upon bestie from way back Margeline (the “Black Mother of Hollywood” herself, Jenifer Lewis), and—oh where is that bumbling terrified assistant of hers, Felicity (So You Think You Can Dance winner Jeanine Mason)?

So yes, Christmas in the Square is a sort-of update of A Christmas Carol, although all the ghosts of the past are just living people Regina hasn’t interacted with in a while, or the occasional flashback she stumbles into during her recollections. Dark secrets are uncovered like holiday stockings spilled out on the floor. Even though she’s played by typically effortless bitch Baranski, we can see that Regina’s not all bad from the film’s start. All bad” isn’t in Dolly Parton’s vernacular. While I don’t personally agree with that optimistic view of human nature, it’s not a terrible fantasy place to spend some yule-time. Plus, Dolly’s so damn good at her shtick by now she almost convinced Grinch Me, for a minute, that the world could be this simple if we just sang it so.

But it’s not me who needs the convincing. For all film’s old-fashioned side-eyeing of city-folk, one might think those who’ll really eat up Christmas on the Square, are the people of Small Town, Kansas, the ones who believe in angels and unfettered optimism. As such, one hopes that it’s Dolly Parton’s arms-wide-open embrace of everybody that rubs off on the people who need that lesson out there. It’s hard not to picture Dolly as that meme of Captain America, as portrayed by Chris Evans’s Insane Biceps, holding together the two sides of this country through sheer force of will. Frankly, I’m not sure she’s enough. But if Christmas on the Square warms up any Grinch’s heart three sizes, it’ll have been worth it.

Dolly Parton’s Christmas In The Square is now on Netflix.