What's a GIF That Just Never, Ever Fails to Make You Laugh?

Once, in a bid of light soul searching while writing about the Jump Street movies, I described my sense of humour by saying that:

No matter how many thousands of words I might spill on Richard Linklater or 6-hour long Italian movies, when it comes to making me laugh, it’s people falling over or being drunk and stupid—or angry and kicking a plant—that probably does the trick more often than anything else.

Now, like, I’m not exactly proud of that, but neither am I ashamed. Sometimes it’s a bit tricky, in that if you see a pratfall happen in real life, you will need to laugh, but you’ll also hope the person isn’t actually really hurt. But overall I don’t think a value judgement on the sense of humour is necessary. It isn’t good or bad; it just is.

With that in mind, and because we’ve survived another week, I wanted to present the one GIF that never, ever fails to make me laugh. I’m pretty sure many of you have already seen it. But just in case you haven’t. Here is pure visual poetry:

It’s all downhill from here. from r/gifs

I must have seen that loop hundreds of times now in the year or so since it appeared online, and every time I do, I—without fail—dissolve into convulsions of laughter. It does look like the lad had a bit of a rough landing there at the end, but I think I read somewhere in the comments from someone that was there that he was okay, so that’s some of the potential darkness dissolved. But I just love how those few brief seconds tell a complete story. A complete, very London, story, a variation of which we’ve all here either seen, or been a part of. Because that urge—to slide down the middle part of the escalator—is just a fully integrated component of the city’s night life. I’ve lost count of the amount of times I’ve either seen it happen in person or indirectly online. Obviously, it’s a really stupid idea, as one glance at the ramp will tell you. Because the way down is not clear! There are obstacles. Specifically put there to discourage this potentially dangerous stunt.

So everyone knows it’s a bad idea.

And yet when enough booze is involved, somebody will inevitably decide to cross over, to foolishly step over the thin line between heaven and hell. Common sense is banished. ‘Damn the consequences!’, they’ll think. ‘The tyranny of the every day must be slain! History will be written! The slalom will be conquered!’

That’s where the lad in the GIF would have found himself, moments before the clip begins. And then, when we join him, we see hubris turned to ashes. To be honest, that first bump, the one that nearly bashes his balls and absolutely bashes his confidence is already enough. When that first obstacle arrests his triumphant momentum, I’m already laughing. But then we get to see his face. The canvas upon which instant regret and a longing for better decision making is writ large. 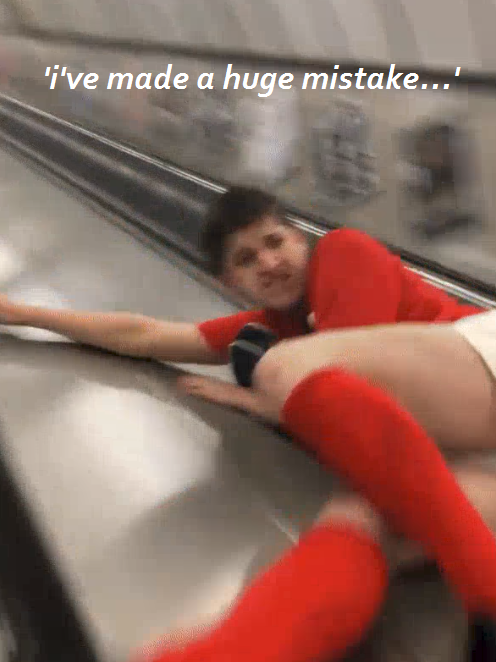 But there’s just nothing he can do at that point. Gravity and a low coefficient of friction got together ages before he decided to send his mass down. They shook hands and laughed as cigar smoked filled the dark basement. And so he accelerates, helpless, a ball of dread and regret in football shorts, until he meets Fate, and completes an arc both divine and dammed. 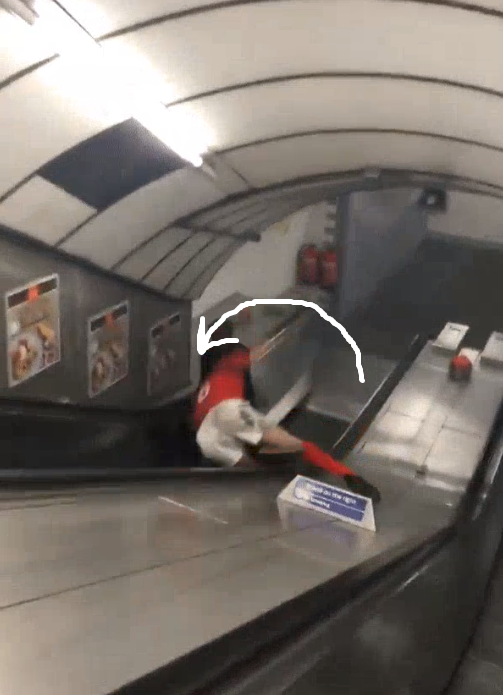 That GIF, man. It just kills me every time.

It gets cuter every time from r/BetterEveryLoop

Which is great already.

But then Reddit user u/CrispyBaconDeadFish said: ‘I don’t know why I imagined Seth Rogen’s laugh when the dog opened its mouth.’

I’ve been laughing for hours.