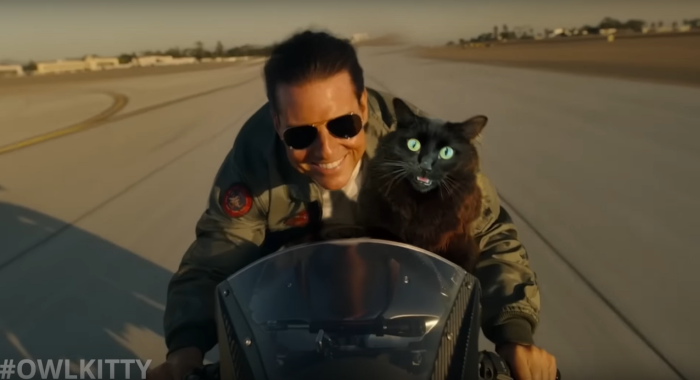 I Haven’t Seen ‘Top Gun: Maverick’ Yet, but I Do Now Know What It Would Look Like With a Kitty in It

I haven’t yet seen Top Gun: Maverick, but that’s not for lack of enthusiasm. I’m actually excited to see it. It’s just that I find it very odd that I am excited. It says a lot how far we’ve fallen that a sequel to fuc*ing Top Gun—a terrible, jingoistic, bad-not-in-a-good-way-just-bad film—can feel like a delicious burst of Real Cinema.

In the age of weightless, serialised, CGI-saturated anti-cinema, something which has a degree of actual craft and cinema magic looks more and more like a miracle. Especially when it then proves hugely successful. Even controlling for Tom Cruise’s insane (in both senses of the word) star magic, it shows that audiences are hungry for this type of material. Despite all the money in the world steering the industry in another direction, people still crave that legit stuff. The machine hasn’t won just yet! Myself, I’m gonna catch Top Gun: Maverick at some point, and though I’m unsure as to whether I’ll be able to look past all the American military rah-rah-nesss of it all, I am certain of one thing—and we’re finally getting to the real reason for this post—and that is: I won’t be able to think of how much better it might have been, if it had a kitty in it! Thanks, OwlKitty: