The Cicadas Are Coming

Because I am, a la Don Draper, extremely susceptible to the charms of nostalgia, I’ve been thinking about two things lately. The first is the summer between my junior and senior years of high school. I was 16 years old. Y2K had freaked people out when I was in middle school, and we were ripe for another mass hysteria event. Nature answered with …

The summer progressed. There were fewer and fewer cicadas each month and then each week and then each day. Senior year started. I applied to college. I decided to study journalism. I went to college. I got a journalism degree. Which brings me to my next little nostalgic event: the time I spent working at a local newspaper chain, The Gazette, which was owned by The Washington Post Company. I was a copy editor for the Prince George’s County office, which was smaller than the main Montgomery County Office, but one day a week I paid $4 each way to drive across the Intercounty Connector and work in the MoCo newsroom during their roll day. Once there had been a Frederick office, too, but that had really shrunk down to a couple of small desks wedged in the upper level of a downtown building. We also covered part of Virginia, although there was no physical office there.

The pay wasn’t great, but it was a journalism job. There were reporters and editors and copy editors and designers and photographers who had worked at The Gazette for decades. And because this was the journalism industry in 2009, there was a palpable sense of anxiety in that newsroom every single day I went to work. Some people who excelled would move up within the company, going from The Gazette to The Washington Post proper—that was the dream. But I think all of us also felt that The Gazette itself did important work. The newspaper was free, and was delivered to everyone in the counties we covered. We had dedicated politics and legislative and education reporters, and they covered their subject areas well. When Prince George’s County Executive Jack B. Johnson was arrested by the FBI for corruption in November 2010, we were there. When the 2010 Haiti earthquake happened, we sent a reporter on the USS Comfort, a Navy hospital ship, to see how Americans were attempting to help in the earthquake relief efforts. I say all this because I learned a lot in those two years at The Gazette: about the importance of local news, and about how the journalism industry fails to value it enough.

Because here’s what also happened during those two years—there were, if my memory is correct, three separate rounds of layoffs. There was a lot of competition at the time from Patch, which was also covering local news and doing it at a fraction of what the newspaper cost. Everyone knew when the layoffs were happening because you would walk into the newsroom for the day and people would start getting called into offices, and the vibe was just wrong. People started leaving for marketing or PR jobs, or to go to grad school—which I did in 2011. I know layoffs continued in the two years between when I left in 2011 and when Jeff Bezos bought The Washington Post Company in 2013, and I also know how hopeful my former colleagues were that he would keep The Gazette open. People need local news, and they need reporters ingrained in their communities, understanding the ebbs and flows of politics, business, education, and everything else we care about. Could running The Gazette really be such a loss that this billionaire couldn’t handle it?

I say all this because the journalism industry has continued its freefall. More than 16,000 jobs lost in 2020, and the bloodbath continued this past March when Buzzfeed billionaire Jonah Peretti laid off dozens of people at The Huffington Post. What is most frustrating about this, of course, is that local news coverage is what ends up suffering, like this: A Virginia newspaper without a reporter to cover Virginia politics.

It's been a pleasure covering state politics for the people of Western Virginia. Because Lee Enterprises keeps slashing jobs, The Roanoke Times has decided to eliminate state politics as a full-time beat. I'll cover something else instead. pic.twitter.com/czQ0ddB721

It’s horribly bleak, and I don’t know how to fix it. I just know that local news matters, and it’s exactly what you want to read when, say, something like the cicadas come around again. (LOOK AT ME, CONNECTING THE POINTS IN THIS PIECE!) It’s been 17 years since the last time they hatched from the ground in the Mid-Atlantic and started terrorizing us, and if you look back on local newspapers over the decades, they were on top of this. Local reporters covered cicadas from all angles. In 1902, The Baltimore Sun spoke to Maryland’s state entomologist to determine the differences between cicadas and locusts. In 1928, the Sun was at it again, cheekily writing about the cicadas’ “mischief” and going in-depth on the sound the cicadas produce. 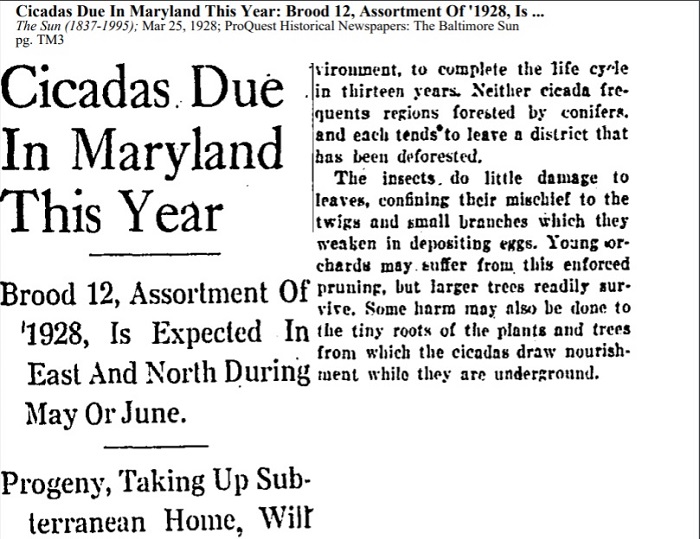 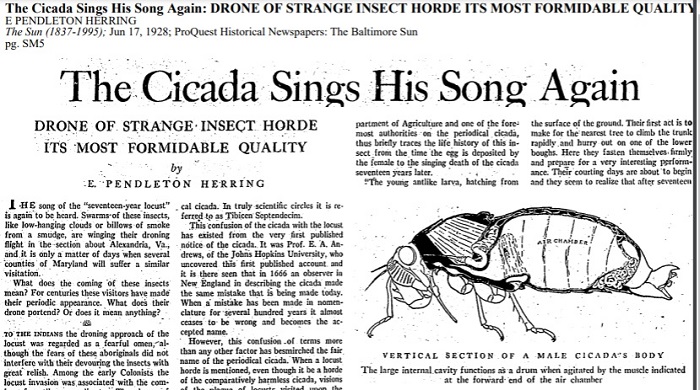 In 1987, The Washington Post wrote an A1 story about the differences between the various cicada types in Maryland, Washington, DC, and Virginia (recognize anyone else on that front page)? The Sun published a splashy feature about “cicada cuisine.” 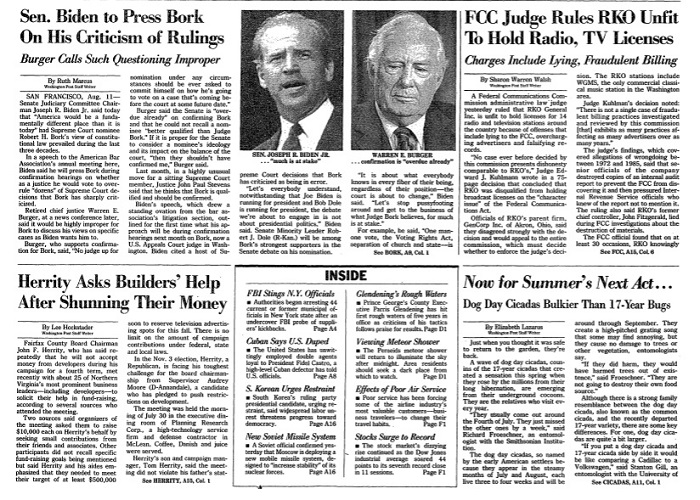 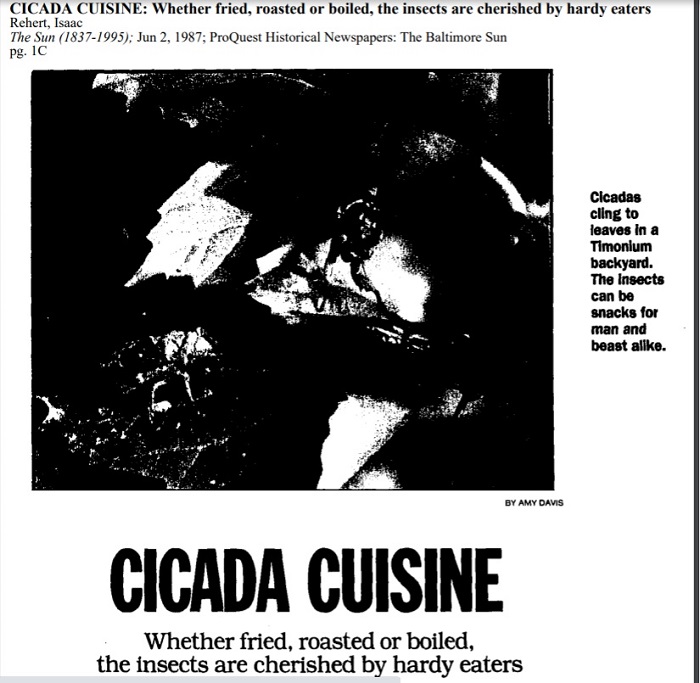 And, in a cycle as familiar as the cicadas themselves, coverage continued through the 1990s and 2000s, and each story incorporated the expertise, enthusiasm, or fascination of local people. A 1996 story in the Sun featured local naturalists and professors. A 2000 story wondered why cicadas were appearing early, and spoke with local residents about seeing the bugs pop up unexpectedly. You want a recipe for cicada-rhubarb pie? A 2004 Sun story has you covered. You want to wonder if rats feasted on people’s failed attempts at cicada-rhubarb pie? A 2004 Washington Post story considered the relationship between concurrent insect and rodent booms. What about an analysis of how tourist destination Ocean City changed its marketing strategy to attract people sick of cicadas? The Sun had that too. And hey, does climate change in our region have anything to do with the disorganized tenor of recent cicada activity? The Post considered that angle in 2017.

“But, Roxana,” you might say. “None of these stories were published by The Gazette.” You’re right! I’m pretty sure the archives were wiped when the paper shut down. My overall point, though, still stands. The Post and Sun have both cut local reporter positions over the years, too, and that’s negatively impacted our industry and our community. Local news matters because it demonstrates how the world happening right around you matters. It prioritizes the events that happen in our backyards and our neighborhoods and our communities. It helps us link our day-to-day lives with those around us. It provides context and clarity to events that we encounter and experience, and provides a microlens. Brood X cicadas are coming for us in the next few weeks, appearing out of the earth from Michigan to Georgia, Tennessee to New York. Read your local news outlets about them. You might learn something.

And if you hear me screaming because those damn cicadas have flown into my hair again? Please send pie as a consolation. Just not the cicada-rhubarb kind!

← The Slow Moving Tragedies of the Earthbound Women in 'For All Mankind' | 'Jeopardy' Announces Final Slate of Guest Hosts, Including Levar Burton →