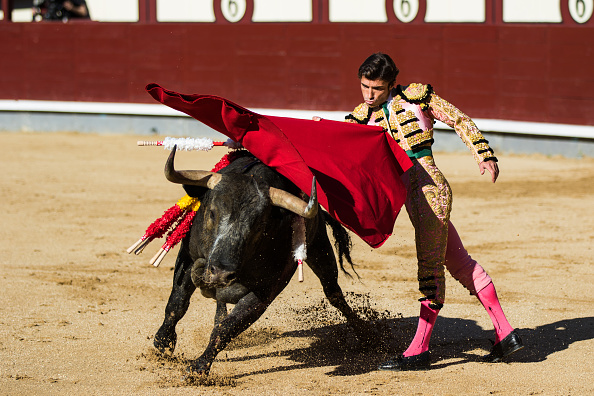 My thoughts on bullfighting are … problematic. As in, I know my thoughts on it don’t toe the party line of any self-regarding socialist liberal. Do I think it’s barbaric? Without a doubt. Does it reinforce the stereotypes about the Spaniards? Absolutely. Is it culture? I mean, according to the most basic definition, yes it is. Is it loved by too many fascists? They love it more than they love banning abortion. Does it say something that the world’s biggest beef exporters, such as Argentina or Brazil, banned it in the 19th Century? Very symbolical. Is it rendered devoid of any sort of heroic value because the picador literally does most of the job and the matador might as well wait for the bull to bleed out? Most likely. Do I find all of this enthralling? Yes, I’m afraid. Too much Spanish in me yet.

Look, bullfighting is on its way out, most Spaniards want to ban it, and regular, weekly spectators have fallen from 10% to less than 7%. These are the dying days of the practice, even though it is legally protected in most of Spain. Just like the dying GOP, they will start lashing out and doing anything to bring attention to themselves.

Last Sunday, the city of Guijón hosted a corrida, where the name of two bulls raised … well, a sh*tstorm. Their names where “Feminista” and “Nigeriano”, Feminist and Nigerian. Both black-haired. Of course.

There is what you might call an explanation for this. First, that the bulls for a given corrida are chosen through a raffle, and second, that the bulls inherit their mother’s name, themselves traced to certain name bloodlines. That means, on paper, that they weren’t named or chosen for political or trolling reasons. That’s utter bullsh*t. The names indicate that somebody at some moment decided to name a cattle line with those names specifically for racist or sexist reasons. In the case of “Feminista,” very likely because the cow was feisty or something. No need to explain the other one. And then, over the passing decades, no one paused to think if maybe those names were racist and sexist.

Let me be clear, I’m not saying all the people involved in the world of bullfighting are sexist and racist … but the vast majority are. They were probably delighted by the chance to see a “Feminista” and a “Nigeriano” being skewered. Did I mention the bullfighter that fought them is a well-known supporter of Spain’s far right? Then again, fascism in bullfighting is as common as domestic violence in the UFC and steroids abuse in wrestling.

The world of Spanish bullfighting pounded on this with all the nuance of people who kill perfectly healthy studs for fun: Going on the defensive, acting with faux, projected outrage, accusing their opposition of ignorance for not knowing the naming conventions for bulls. It’s the same logic used by ammo-sexuals when they demand proof of knowledge about guns in order to debate gun control. All of this is willful bullsh*t, a diversionary tactic to try and justify the unacceptable and deny the self-evident, which for our current purposes we will limit to the names of the creatures.

Reactionary cultures operate on a tautological circle jerk, resorting to references based on the ever older or the obscure, and are for the initiated only. When they are criticized, they turn to pee outwards, aiming at the critics. Then they return to the circle, every time with the nagging sensation that someone else is missing. I mean, what’s the problem with changing the name of an animal you’re going to kill anyway?

Guijón’s mayor, a socialist, decided to ban the corridas at the local plaza, canceling the current administrator’s contract. Also, because the site was hemorrhaging cash. Yet, it’s still fascinating. And idiotic. And embarrassing, inferior in every way to American rodeo.

Still, it’s the one place where you have the chance to see a fascist being gored, so there’s that.


← Stream It or Nah: 'Bob Ross: Happy Accidents, Betrayal & Greed' | 'The Other Two' Will Fill that 'Schitt's Creek' Sized Hole in Your Heart →