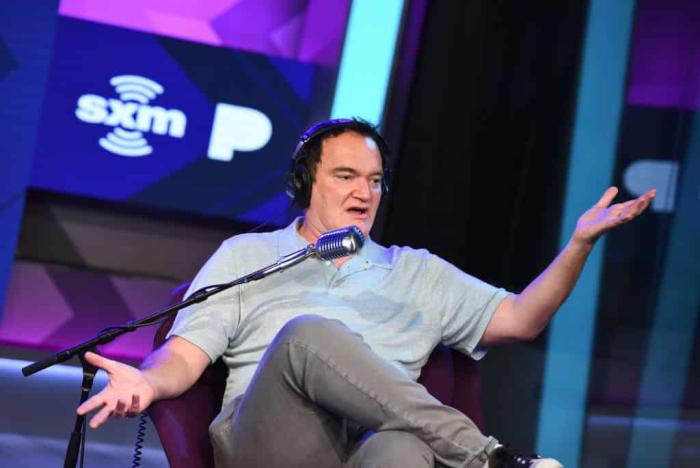 Review: ‘Once Upon a Time in Hollywood’ the Book Somehow Makes the Film Way Less Interesting

Quentin Tarantino has made much noise about his claim that he plans to stop directing films after his tenth title. 2019’s Once Upon a Time in Hollywood was number nine and widely considered one of his best by critics. It landed him another Best Director nomination and became his second-highest-grossing title. He’s not quite done with this story either. Tarantino is reportedly working on a four-hour cut of the movie that could premiere on Netflix. He also has plans to make a TV series based on Bounty Law, the show that Leonardo DiCaprio’s character, Rick Dalton, starred in. He’s even written a stage adaptation. Available now, however, is his literary adaptation of sorts of the movie, a book that Tarantino has described as ‘“a complete rethinking of the entire story.’ This take on Once Upon a Time in Hollywood is less an old-school novelization than a director’s cut for the page.

Quentin Tarantino's first novel, Once Upon a Time in Hollywood, is available now from fine booksellers everywhere. pic.twitter.com/STcAwV1nJN

Tarantino often struggles as a filmmaker to balance his directorial skills with his screenwriter ones. The latter often engulfs the former, as evidenced in works like The Hateful Eight, but when he nails it, we get stuff like Inglourious Basterds, which is, for my money, his best movie. One of the things that made Once Upon a Time in Hollywood so interesting was its languid pacing and Tarantino’s willingness to let quietness have its moment. Even in these dialogue-heavy moments that we expect and crave from him, the focus was less on how impressed he was with his own work. With actors like Leonardo DiCaprio and Brad Pitt at their most casually appealing, there was a lived-in quality to this story that helped to ground Tarantino’s more esoteric qualities. With nothing but Tarantino’s own words to tell the story, his worst excesses soon engulf everything else.

On a basic writerly level, Tarantino’s skills are not best suited to the form of the novel. Details that can be quickly condensed as a one-liner or visual gag take over paragraphs, offering little in the way of tangible character or plot development. The book sometimes reads like a pulp novel, which makes sense for the author’s achingly detailed commitment to era-accurate recreations, but it’s also too overladen with superfluous details and padding to really flow like one. It doesn’t capture the film’s often genteel pacing either. It’s just stagnant, and I’m not sure why it needs to be so. In the second chapter, he details stuntman Cliff Booth’s love of cinema, going on and on about the movies he loves (Kurosawa) and hates (Dean Martin’s Matt Helm titles.) It’s not especially interesting to read and it doesn’t offer any real insight or depth to Booth’s character. A lot of these moments also read like Wikipedia entries, especially whenever Tarantino details a specific film or actor’s work. If this book is intended to add depth to the film and its ensemble, then it’s not particularly successful. Listing off the stuff you like isn’t a substitute for a personality.

Some new details are revealed to us, such as the fact that Cliff Booth is a f**king sociopath. If the brief scene in the film where it’s implied that he killed his wife because she was a nag made you uncomfortable then buckle up. It’s way worse here, and it’s only the second time Booth killed someone and got away with it (not counting all the bragging he does about the Japanese and Italian soldiers he killed during the Second World War.) His fight with Bruce Lee, a moment that remains controversial in the film, is even pettier here, with Lee painted as a diva who needed to be taken down a peg or two by a guy who seemed to want to truly kill him. It’s not as though hints of Booth’s violent cruelty aren’t evident in the film, but on-screen we get some tonal consistency that’s absent here.

I’ve seen a lot of critics describe Once Upon a Time in Hollywood as Tarantino’s mid-life crisis movie, his old man venture in a similar manner to Martin Scorsese’s The Irishman. It’s not an assessment I necessarily agree with but I understand where it’s coming from. The film is at its most impactful when it conveys the slow, sad ending of the old Hollywood in favor of the hot young generation that changed the game. The moment in the book that most strikingly captures this melancholy is a chapter dedicated to the actor Aldo Ray, a major influence on Tarantino whose career fell into swift decline due to his struggles with alcoholism. In this moment, where the actor is set to star alongside Rick Dalton, we understand the true loss of a generation, abandoned by the studio system they became reliant on and out of place in an industry with changing standards for stars and craft. It’s a brief moment of thematic heft in a novel with the depth of a puddle.

It’s almost fascinating how Once Upon a Time in Hollywood as a novel makes the film less interesting thanks to its approach to the exact same story. We are mercifully spared the literary version of the Manson family’s visit to Cielo Drive but the expansion of other scenes feels unnecessary. We see more of the serious-minded child actress Trudie, played so memorably by Julia Butters on-screen, but don’t learn much beyond how she makes Rick feel better about himself (and also that she’ll one day be Oscar-nominated for her performance in a Tarantino movie. Huh.) Sharon Tate has a couple of sweet moments, but Tarantino doesn’t really know what to do with her when he’s not using the late actress as a symbol of sorts for the era.

The biggest problem with the novel is how Tarantino verbalizes that which should have been left as subtext. On-screen, Rick’s self-loathing career and personal decline feel authentic in the hands of DiCaprio, an actor notably adept at striking the balance between charm and sleaze. On the page, the narration is sympathetic to a fault, both with Dalton and Booth. These are two deeply toxic men who are acknowledged to be such, but gosh darn it, Tarantino likes them too much to add dissect this issue further than a mere glance. We are told that Dalton’s flaming hippie special turned him into a figurehead for the ‘silent majority’ of Nixon’s Presidency, but that tantalizing thread is left dangling.

Honestly, it seems like this wasn’t even the book that Tarantino wanted to write. He seems most engaged when detailing to the nth degree the pilot for the Western series Lancer that Dalton guest stars in, and even then, these chapters (yes, plural) read like plot summaries taken from a very dry A.V. Club recap. The often-cheeky replication of pulp-esque clunky prose has its moments but they lack the propulsive pacing that make real pulp so easy to consume. At 400 pages, this story leaves you more tired than thrilled.

Judging Once Upon a Time in Hollywood as a mere novel doesn’t work. It’s not really supposed to. Tarantino wants to add a new level to the multi-layered recreation of a highly specific moment in entertainment, and to his credit, the book fits neatly within those unique parameters. There’s real ambition here but the demands of the literary often exceed this filmmaker’s grasp. This is an exploration of the intersections between high and lowbrow, as Tarantino’s work so often is, but the demands of the written word are markedly different from what a film can achieve. All too often, I was left feeling deflated by the book, disappointed that the ambiguity of the film couldn’t be left to stand on its own.

Once Upon a Time in Hollywood is now available wherever books are sold.