When A Pennywise Doll With Strange Markings On It Floated Into Her Yard, This Woman Set It Ablaze

I don’t like clowns. They are demons sent straight from Hell, wearing Satan’s greasepaint and lulling the world into a false sense of whimsy and safety while plotting to steal children and suck the souls from unwilling birthday party attendants. That being said, I will watch horror movies with clowns in them in a futile attempt to lessen my coulrophobia. This is why I saw IT in the theater, though one scene scared me so badly that I attempted to climb into my husband’s skin (while he was still in it) to hide.

What I’m trying to say here is that I feel a deep kinship to Renee Jensen of New Jersey. According to The AV Club, she was enjoying a (New Jersey) nice day on their secluded property in Harrington Park borough when a Pennywise doll floating into her yard.

YES. IT FLOATED DOWN INTO HER YARD. I guess it seems less terrifying when I clarify it was attached to balloons, except the header picture for this post proves that takes place in IT: Chapter Two and that makes it infinitely worse. Plus none of the news outlets I read said balloons were involved, so I have to assume that this monstrosity just floated from the sky tethered to nothing but the invisible hands of Satan.

Did I mention that the doll had strange writing on its forehead? 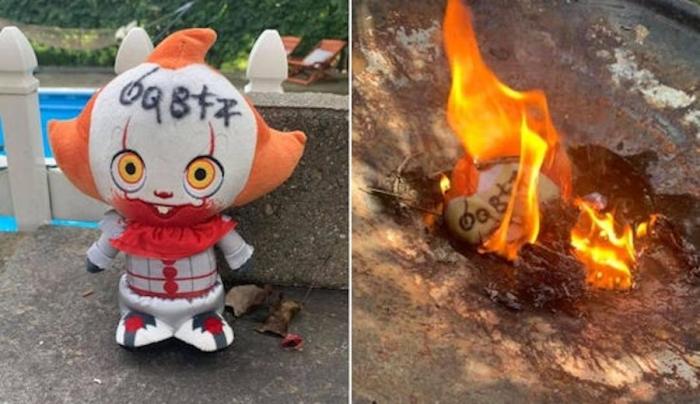 If you just screamed, “GET THE ENTIRE F*CK OUTTA HERE WITH THAT” then you are not alone, as I did the same. Jensen, a reiki healer, was not about to let this clearly possessed Pennywise plush ruin her life. As you can see in the photo above, she decided to do what any sane person would do: she burned the doll. Jensen then used sage to cleanse her home and slept with a knife that night, as we all know you do not ignore horror movie tropes when they land in your backyard on a sunny day while somehow avoiding all of the trees surrounding it.

If this is a very tricky viral push for IT: Chapter 2 then I salute the big brains behind it over at Warner Bros. for their evil ingenuity. If this is the work of Pennywise herself then I need to purchase some holy water, fifteen pocket knives, and enough micellar water to drown the makeup off of fifty clowns.


← 'I Am Patrick Swayze' Review: Not All Masculinity is Toxic | 'Practical Magic' is Coming to TV (Probably Without Sandra Bullock and Nicole Kidman) →