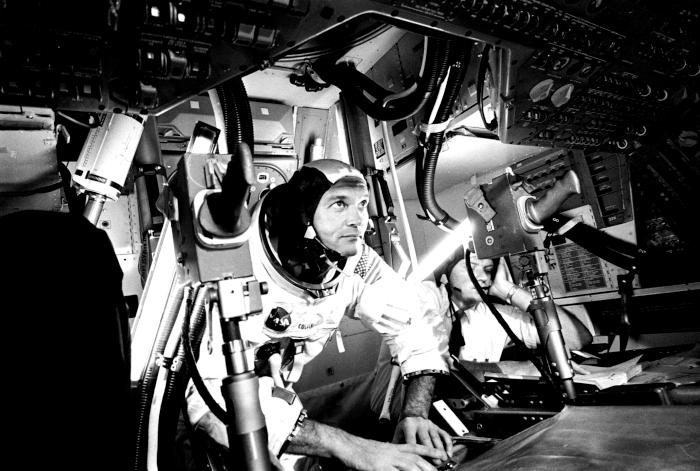 Ten years before I was a gleam in my father’s eye, three men set out for the moon. They did so in a ship less intelligent than your high-school graphing calculator, strapped atop the largest ever rocket burning 20 tonnes of kerosene and hydrogen every second until they exited the atmosphere. Three days later they arrived at the moon and achieved lunar orbit. From there, Neil Armstrong and Buzz Aldrin left for the lunar surface and landed on June 24, 1969. They left behind Michael Collins, pilot of the Columbia command module, soon to be dubbed, “the loneliest man in history.”

Major General Collins died yesterday at the age of 90 after battling cancer. A test pilot before joining the Space Program, he was the first man in history to complete two separate spacewalks, both of which occurred during his Gemini 10 mission. Though the press was fond of that “loneliest man” line, Collins stated in his autobiography that he never felt lonely as he waited for his crewmates’ return, rather he felt the anticipation and satisfaction of the moment.

Collins never returned to space after his triumph, preferring to stay on the ground and close to his family. He became Assistant Secretary of State for Public Affairs for Richard Nixon before moving on to Director of the National Air and Space Museum. Though perhaps the least well known of the Apollo 11 crew he was nonetheless lauded with awards over the years, most notably the Presidential Medal of Freedom in 1969. My personal favorite is that he, along with Armstrong and Aldrin, has his very own crater, 2.4km of prime if airless lunar real estate.

In some ways, Collins’ mission seems more difficult even than what Armstrong and Aldrin faced. They were in the thick of it and in control of their own fates, as much as anyone in the vacuum of space can be. Collins could only wait and hope that if something went wrong he’d be able to fly down and pick up the Eagle. I, meanwhile, regularly meltdown when driving through Boston.

Dear Mike,
Wherever you have been or will be, you will always have the Fire to Carry us deftly to new heights and to the future. We will miss you. May you Rest In Peace. #Apollo11 pic.twitter.com/q4sJjFdvf8

Michael Collins helped define American space travel. In some ways, the country has rested on its laurels since Collins and his crewmates made history. The lunar landing was our high water mark, the point against which every other accomplishment is measured. Some day, perhaps when we land a human on Mars, we’ll move beyond that comparison. I think that’ll be something Michael Collins would celebrate.