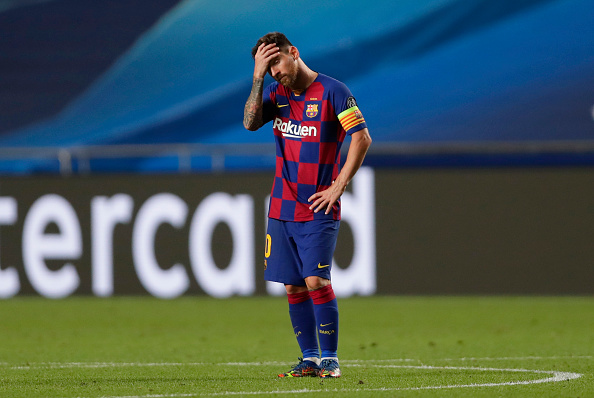 It is a risky proposition that of intertwining a person with a major institution, even at scales that aren’t, say, nation-building; for example, sports teams, record labels, publishing houses, etc. Though defining your identity as an institution around a single figure is a better foundation than defining yourself in opposition to, you’re still building around a single point of failure. In the case of sports teams, the probability of that point of failure transferring within a career is very close to 1.

The news of footballer Lionel Messi leaving Barcelona F.C. fell on Thursday … like a cliché that hasn’t been used in a long time. It probably was carried by Fox News and their ilk, even though they think Football A.C. is gay and Marxist. But why is this such a big deal, and what does it say about the state of the top echelons of global Football? After all, footballers transfer from team to team all the time, just like in US’ sports leagues, except with the added bonus of purchases that, in the major European leagues, usually command eight-figures.

To give you an idea, remember that time Lebron James left Cleveland for Miami, the first time, during a TV special? That one happened at a time Lebron was still on his way to becoming Lebron. Now, imagine if he had done that last year, after spending a decade with the Cavaliers and winning 7 rings. That would be 25% of what Leo leaving Barça means. Even more similar is when Tom Brady+Gronk left the Patriots for Tampa Bay, and that still would only amount to another 25%, by comparison. Now combine the former with a series of scenarios that range from real to outrageous: Christopher Nolan, Clint Eastwood, and Bugs Bunny leaving WB with Disney making a move; Keenan Thompson leaving SNL; Megan Rapinoe and Simone Biles renouncing their US citizenry; Ben Affleck, Jack Nicholson and Spike Jones withdrawing their support for the Red Sox, Lakers and Knicks respectively; Saoirse Ronan claiming she will no longer do period piece again …

Messi was a rare bird over the last 30 years or so of international football, probably the last of his kind: The footballer that made his entire career playing for a single team, the team he loved. And he did it playing for one of the last major football clubs still owned by the community that gave birth to them.

Quick summary: Lionel Messi was born in Rosario, the third-largest city in Argentina, in 1987. Showing a once-in-a-lifetime prowess in the field, at eight he joins the football academy of the other team close to his heart, Newell’s Old Boys. His talent is hindered only by his limited height, but it’s still more than enough for Barcelona F.C. scouts to invest in him (and in the hormonal therapy he will need). At age 13, he’s already moved to Catalonia, and joins the hallowed Barça academy, La Masía. After a very short period playing for the azulgrana’s youth squads, he’s incorporated into the main team in 2004. Ever since, he’s made 778 appearances, scored 672 goals, and assisted with a further 268. That’s a 40 point average in Basketball terms. He’s won the Spanish round-robin and knockout tournaments on 10 and 7 occasions, respectively. Four Champions League and an assortment of other club contests, plus player of the year awards almost every other year. Playing for the Argentinian squad as captain, he led them to a second place on 2014’s World Cup and one Copa América, earlier this year, but that one was pretty much held so he would win at least one international cup. Still, a strong contender for the GOAT. Also, he’s always been portrayed as the good boy in comparison to Cristiano Ronaldo’s playboy ways. Except for the tax fraud stuff.

Over the last 15 years, Barcelona F.C. has become intrinsically associated to the certainty of Messi. They didn’t just sign him, they helped raise the greatest player in history. That countered the liquidity of the Football economy and the transfer market by doing things the way they were done before globalization and oil money started pouring in the sport. You find a talent within your community, you help develop him, and you basically create a roster of fans that happen to be playing for the team. That was the case with Pelé. Maybe at most, the footballer would make his career in two teams, in different countries, but he would become an icon there, becoming an adopted son of the club’s city. That was the case with Maradona and with Messi, who had stated his desire to play for Rosario’s Newell’s in the latter stages of his career, if only things in Argentina weren’t so bad … always.

It is not without irony that Messi has had to leave because Barça played that liquid transfer market poorly. Short story, in the midst of the pandemic, with football everywhere suffering from shortfalls (the revenue from stadium attendance all but disappearing), the club’s president decided to spend like it was fantasy football without being able to transfer names out. They’re currently 1.2 billion euros in debt, which shouldn’t be a major problem considering the amount of money they rake in every year. But they trapped themselves into that debt because… well, I’d rather let the people at TIFO Football explain it because I’m too much of a himbo for finance stuff:

The mismanagement and clashes with Barça’s president almost led to Messi leaving in late 2020. Barça could not afford him. Even though he is in the twilight of his career, he’s still got it and it would be worth his $100 million dollar salary. The 2020-2021 season was relatively terrible for Barça and they still finished third in La Liga and won the knockout tournament with Messi scoring 38 goals in 47 appearances. Just a few weeks ago, a deal had been struck for a further five (and probably final) years, with Messi taking a substantial pay cut in exchange for future revenues. It solidified the mutual commitment and love between the team and Messi, business aside. Both wanted to keep the partnership.

But there was a problem remaining, and it’s probably what led to this: La Liga’s salary cap. Even though European football has tried to rein in the huge differences in spending between major and smaller teams, it’s still far from … jeez, the NFL. In La Liga, salary caps are adjusted according to the team’s revenue, which defeats its own purpose. Barcelona’s makes the NFL salary cap look adorable. It still wasn’t enough to cover Messi at a 50% discount, because of the aforementioned financial crisis. Barcelona couldn’t sell players fast enough to keep him.

Some see this as a tug-of-war between Barça and La Liga, in the wake of the Superleague shitshow from a few months ago. It doesn’t help that La Liga’s president is sniping at Barça’s president with petty rounds:

(He’s basically accusing him of acting like an entitled child and being wrong about the league’s economic prospects. It’s dumb, middle-age shit)

This is sad. I’m not a Barça fan, Atleti all the way. But Messi is now a free agent after a decade and a half of proving football’s current economic model wrong: Home-grown talent in a community-owned team winning consistently and making all the cash. Now, ironically, he’s left with few choices, both in teams owned by oil money: Manchester City and Paris Saint Germain. The exact opposite of everything he and Barça had built.

There are rumors that he could end up in the MSL, which… NO. HELL NO. They don’t even have relegation! I’m more excited about the (impossible) prospect of him finally returning to Argentina to finish his career playing in South America. I ask you to join Newell’s Old Boys and the city of Rosario in prayer:

← Review: The Perils of Growing Up Meet Haneke-esque Unease in the Indie Drama 'John and the Hole' | Matt Damon Is Boston 'Strong' On Hot Ones →