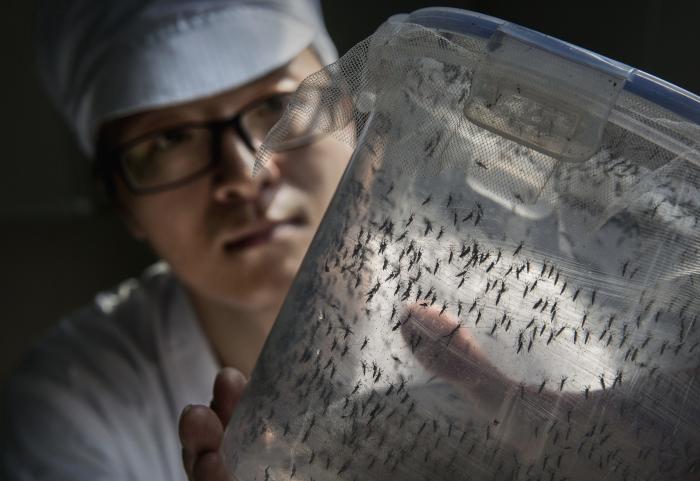 I’m going to do something that goes against everything I believe in and might make me look like a clown in a few years’ time. I am going to second-guess the discoveries and research of highly specialized scientists, worse still in our current climate, biotechnology specialists. And I am going to second guess them from a gut-level feeling and arguments from a place of uncertainty (is that a named logical fallacy?). But here we go: Perhaps it’s not a good idea to try and wipe out entire species of mosquitoes, especially by modifying their genes?

You might’ve heard about this on the news, but there is an ongoing experiment that seeks to quell a mosquito species known for being a vector of Dengue and Zika, among others, the Aedes aegypti. The plan, developed by British Biotech company Oxitec, will see hundreds of millions of male aegypti specimens with modified genes. Once they reproduce with wild female aegypti, the modified genes will express themselves as a defect that prevents their female offspring from reaching adulthood, quelling the population and the biting vectors themselves.

The first field study in the USA started on March 2021, in the Florida Keys, with the release of up to 750 million of these defective mosquitoes. Of course, this experiment got kickstarted only after testing them in a Third World country, in Brazil more specifically, where results have indeed been promising. But still, this has been a decade-long process, facing stern opposition from the residents of Monroe County.

To be fair, this has already undergone successful trials in Singapore, where despite having one of the best public health systems in the world, Dengue infections still happen. And hey, the CDC seems to be for them. It is, after all, a precision-targeted measure that does away with the need for insecticides use or disrupting ecosystems by eliminating swamps and ponds where other species might thrive. Plus, these trials have had at most five years, there’s still time for the jury to reach a verdict, right?

Except perhaps that the words “massive biological experiment” and “approved despite local opposition” and “in Florida” are some of the most alarming red flags in the entire Western Hemisphere, even before DeSantis let 60,000 Floridians (and counting) die of Covid, I guess because he wanted his 2022 reelection bid to be a little more challenging. However, this experiment was approved by the EPA in 2020, without the participation of third party committees or external peer review, instead, with Oxitec working with the EPA behind close doors, as described in this Boston Globe column by gene modification specialists Natalie Kofler and Jennifer Kuzma. By the way, who was in charge of the EPA in 202… OH, FOR FUCK’S SAKE.

Aaand that’s when the “gut-feeling” starts crossing the threshold of unreasonable doubts, because it’s not about being against gene modifications themselves, it’s about the self-evident commercial interests and the consequences. There are legitimate reasons to be concerned about the impact of releasing genetically modified mosquitoes in the wild who are designed to obliterate their species. There are public health ethics reasons to consider, such as community consent, and biosafety concerns when there aren’t clear international guidelines and treaties to regulate these interventions. Similarly, there still isn’t a framework of transparency, third-party reviews, community outreach and participation and, most importantly, political accountability, even when the fast-tracking of the experiments in Brazil seem to have resulted from good-faith programs, aimed at stopping the persistence of Dengue, eschewing public participation from the communities where the experiments took place. Oxitec’s earlier experiments on the Cayman Islands on the other hand…

Apparently, there is uncorroborated evidence that the experiment might not be going exactly as planned, because life finds a way: there might be signs that the GM mosquitoes bloodlines have persisted. Evolution is all about surviving the genes you were born with, and whether or not GM mosquitoes might, consequently, result in a stronger offspring, this is not what scares me. Time to go back down to that gut-level feeling of unease. Even though I think gut-level reactions are mostly defensive evolutionary mechanisms, deeply rooted in the genes that hold us back from rationality, every once in a while the accumulated knowledge of thousands of years of culture seeps manages to seep in, raising a legitimate doubt.

Most of the articles and studies I linked before mention the fear of disrupting food chains. They are so goddamn omnipresent that they are also a prime source of protein for millions of other species, most of which happen to be the ones we wouldn’t like to see starve out into extinction. Our accumulated cultural knowledge has seen firsthand what happens when we fuck around with food chains. We haven’t really learned, of course, which makes all these talks about extinguishing mosquitoes even more frightening.

Mosquitoes are a certainty, they have been here for at least 100 million years based on the same, time and extinction-event tested design. One that barely needs to make an effort to adapt to almost any environment. Neither scavengers nor predators, barely feeding on nectars or algae, but with one strategic innovation: Using the blood of other animals to nourish their eggs. That lowly condition clearly tempts some people into thinking they fulfill no other ecological function. Except that they are a constant. Am I crazy to think that the people who want to make them go extinct are crazy on a cosmic level, even if its just one species? That messing with mosquitoes is just asking for Lovecraftian consequences? This, as the internet cliché goes, is their planet and we are the ones living in them; that is, if they don’t seem to fulfill a particular ecological function because they are at the center of it? And that perhaps a biotech company that isn’t even publicly traded yet and corrupted environmental agencies shouldn’t be the ones making these kind of interventions.

The argument in favor is that there are no anti-viral medications against diseases like Dengue, and the recently discovered vaccines still have a long way to go. But as a recent pandemic recently proved, when you actually put in the money researchers need, when Public investment and some private research combine and have all the resources and focus they could possibly need, the timetable for breakthroughs accelerates exponentially. I mean, seriously, how about investing in actual public health instead of trying to high-tech your way into hacking an ecological constant? I don’t know, maybe it would be easier for the State of Florida to tackle tropical diseases through a network of public clinics or dispensaries. Do they have those? Those have pretty much doubled the life expectancy in the entire South American continent. I reckon running those might be cheaper in the end.

Also, did you hear about the Malaria vaccine recently approved by the WHO? Perhaps the most groundbreaking good news of the Century? I mean, the logistics alone of manufacturing and distributing that vaccine seem much simpler (and cheaper) than releasing and keeping track of millions of tiny things.

← The Exhausting Ubiquity of Bruce Willis | Trailer: Has Anyone in 'House of Gucci' Ever Actually Met an Italian Person? →