Industry News and Trailer Round Up: We're Heading Back To Tatooine

If you’re still emotionally processing all of the events of 2020, you’re not going to be happy with what I say next. Happy November! We’re almost done with 2021! A new month and the start of the holiday season has begun. Although some retailers started the season weeks ago, harumph. A bunch of entertainment news dropped yesterday ranging in size and import.

Jeffrey Donovan, probably best known for the USA Network show Burn Notice, has been added to the roster for the Law & Order revival. Maybe we’ll get a Bruce Campbell cameo out of it. Anthony Anderson and Sam “Jack McCoy” Waterson are also in talks to return to the series.

Back in June People Magazine reported that Scarlett Johansson is set to produce a movie based on Disney’s Tower of Terror ride. The ride itself was inspired by an episode of The Twilight Zone, so I guess we’re coming around full circle, sort of. Yesterday, internet rumors started swirling about Taika Waititi signing on to direct this movie. I’m sure that’s going to be just swell and all, but Taika’s got a handful of projects in development right now. So, it remains to be seen whether this will come to fruition or not.

Boondock Saints III is a thing that will happen. Director Troy Duffy is getting Norman Reedus and Sean Patrick Flanery back together for a sequel no one asked for. Willem Dafoe will also appear. Yay? Here are the boys looking pretty slick at the 2009 premiere of The Boondock Saints II. 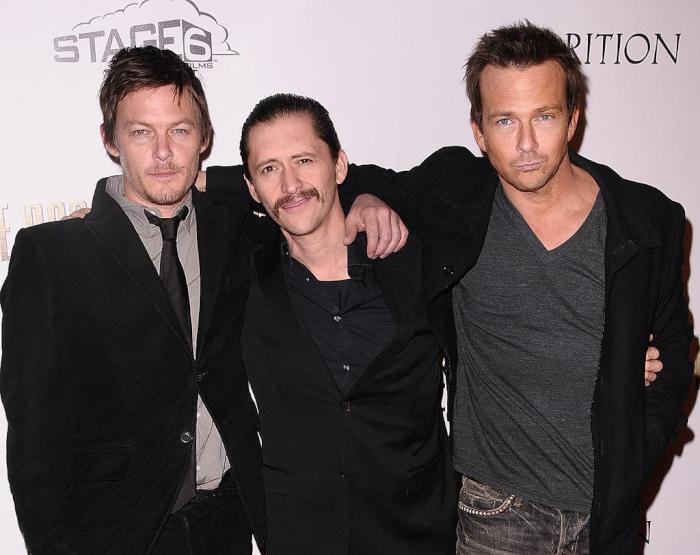 Entertainment Weekly clued us in on some of the plot of Hocus Pocus 2. Stars Bette Midler, Sarah Jessica Parker, and Kathy Najimy have begun filming the movie that takes place almost 30 years after the beloved original. Three teens played by Gossip Girl’s Whitney Peak, Dirt’s Lilia Buckingham, and American Horror Stories’ Belissa Escobedo incur the witches’ wrath in modern-day Salem and then have to foil their nefarious plans. Hannah Waddingham, Tony Hale, and Sam Richardson have also been announced as part of the cast.

As Mike mentioned in last night’s P-Love, Chris Pratt continues his march toward mediocre world domination by signing on to voice Garfield the cat in an upcoming animated movie. I see Pratt as more of the Odie type myself.

The origins of Christmas and St. Nick are explored in Netflix’ A Boy Called Christmas

Roland Emmerich’s upcoming disaster movie, Moonfall, got a new trailer too. The more I learn about this ridiculous-looking project the more I cannot wait to watch it. It looks gloriously silly and will be in theaters on February 4th, 2022.

Finally, Disney has released a trailer for the new Star Wars series, The Book of Boba Fett. The show was teased during the end of The Mandalorian’s last season and will star Temuera Morrison as the legendary bounty hunter and Ming-Na Wen as Fennec Shand. Based on the trailer, Jennifer Beals will be featured as a Twi’lek. Twi’leks are that humanoid species with the two tails growing from their skulls.

Every galaxy has an underworld.

Experience the new trailer for The Book of @BobaFett. The Original Series starts streaming December 29 on @DisneyPlus. #TheBookOfBobaFett pic.twitter.com/sGwHwvNIlY

The series, which starts streaming on Disney+ December 29th, definitely looks like something fans of The Mandalorian will be able to get into. I’m all about diving into the seedy underbelly of Tatooine as Boba tries to fill the void left by Jaba the Hutt. Here’s the poster too.