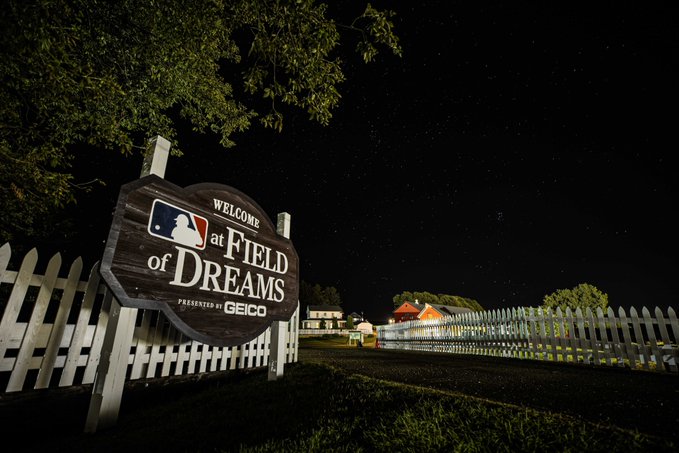 Baseball for the Nostalgic: MLB at the 'Field of Dreams'

I don’t know how many of you follow baseball. I certainly don’t. But my family does (#PinStripePride), and a lot of my friends do (#LMG, #whitesoxnation, #gocubsgo, #RingTheBell). So, I’m aware of it as a thing. Since last week’s Field of Dreams game, played on a made-from-scratch Iowa baseball field, has a lot to do with a well-known movie we figured we should cover it here in some fashion.

For those of you who may not know Field of Dreams is a 1989 movie staring Kevin Costner in his prime. It’s about a guy named Ray Kinsella who converts his cornfield into a baseball field because some spooky voices from within the corn tell him to.

Since the movie’s release 30 years go, a lot of ink has been spilled on how it’s about lost dreams, generational ties between fathers and sons, the beauty of baseball as a sport that unifies us, and the magic of belief. A lot of people have very strong feelings about it.

The MLB at the Field of Dreams event was originally planned for last year. But, well, you know. So, last week the (first place) Chicago White Sox met the New York Yankees on a field that was built right next to the movie set that has been operated as a tourist destination since 1989. Costner was even on hand to recreate the magical moment when the teams wander out of the corn to play and made a rousing speech about the enduring legacy of the film, and of the sport of baseball. He quoted his character in the film as he asked the crowd, “Is this heaven?”

By all accounts, it was a beautiful night.

And it was an epic game … if you’re a Sox fan (Southside represent!)

Of course, the most magical moment of the night came from White Sox shortstop Tim Anderson, who won the game with a walk-off, ninth-inning home run. Born in 1993, a full four years after Field of Dreams hit theaters, Anderson later admitted he’s never actually seen the movie! But that didn’t stop him from creating this Hollywood ending for the game.

So that’s what all the hubbub was about if you, like Tim Anderson, are too young to have seen Field of Dreams and had no real frame of reference for why last week’s game was so important. Or why your uncle was getting a little teary-eyed watching it. You can actually catch it for free on Peacock right now. Or rent it on Amazon Prime and Apple+. It’s summer, better get your baseball on before football starts!

← 'Ted Lasso' Episode 4 Recap: Sweeter Than Mincemeat | Review: 'Free Guy' is Half of an Amusing Movie Begging to Be Freed from the Weight of Its Premise →