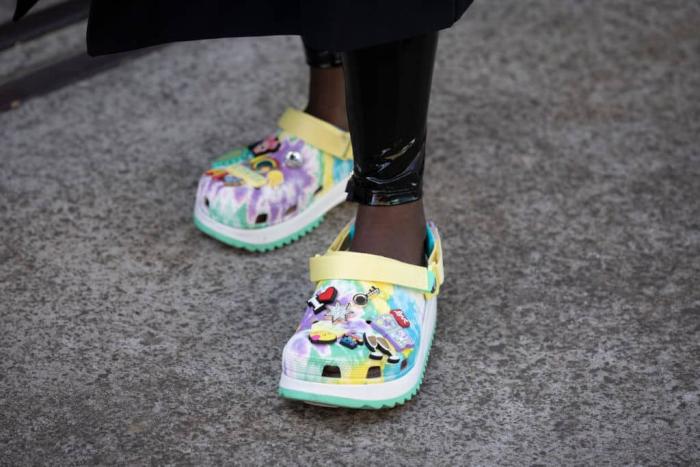 I’ve never been a dedicated follower of fashion. I wear scruffy tea dresses, graphic t-shirts with women directors’ names on them, and am fully committed to leggings being an acceptable substitute for tights. So, whenever I see Twitter going wild over the latest fashion craze or haute couture creation clearly created solely to troll the poor, I mostly don’t pay attention. Now and then, however, we are confronted by true madness and I have no option but to stare in shock and awe.

Balenciaga has collaborated with the infamous rubber clogs maker Crocs several times before. They made $850 platform clogs that towered several inches, much to the delight and derision of the internet. Now, they’re kicking things up a notch with Balenciaga Crocs stilettos. Yes, those are three words that definitely belong together.

Balenciaga need to be stopped… pic.twitter.com/1VT1D4S0O6

Balenciaga Crocs are here because hey why not? pic.twitter.com/6b9ggsMv1j

Isn’t the whole point of Crocs that they’re super comfortable? Doesn’t adding a full heel kind of spoil that? I must admit that I find these shoes to be hilarious but kind of shoddy looking. Design-wise, it looks cheap. That may be the point, I suppose. Fashion evolves, it’s not for everyone, and it’s a perfectly legitimate artform, so using it to express feelings of pure trolling has its benefits. I would just hope that Balenciaga of all companies would put more craftsmanship into these shoes than what the images suggest.

But it doesn’t matter what this aging philistine thinks. Balenciaga’s Crocs collaboration has yielded major results for both companies. The platform Crocs sold out, and the company, according to Sole Supplier, reportedly saw a 4,900% spike in sales after Nicki Minaj was photographed wearing some on-brand pink Crocs. So expect to see the Croc stilettos all over your Instagram feed very soon.