Are These Opulent Eats Worth Breaking The Bank?

I like to eat. You’re not going to catch me ordering a salad for appearance’s sake, and I’m not one of those folks who has a standard dish I order everywhere I go. Food is good food, as a wise man once told me. And I am here to try all of it. Unless it has mushrooms in it. Then you can keep it.

But even I, a devotee of the mise en place, a Bon Appetite bon vivant, a cormorant of the caramelized, a glutton for … OK, you get the idea. Even I have to step back sometimes and say, “Whoa, that’s too much.” Behold Phozilla.

This lobstrosity is brought to you by GAO Viet Kitchen in San Mateo, California. The chef and owner, Viet Nguyen, offers up a whole 1.5 lbs Maine lobster, beef rib, oxtail, filet mignon, beef brisket, marrow, pho boiled soft onion, rice noodle and 24-hour beef marrow broth in a bowl. For you to eat. Or take pictures of. Or just generally marvel at the excess of it all.

Living in New York City, you get used to paying a lot for food. But, would I pay $100 for a taco? No. Only because I couldn’t find one via Google search. I did find $100 hot dogs at the now-defunct DougieDog in Vancouver, BC. It involved a foot-long bratwurst, Kobe beef, lobster, 100-year-old cognac, and truffles. Here’s a video of Dougie himself putting one together on some Canadian talk/news show back in 2012.

If you have a more pressing need for overpriced foods, you can still pick up a $100 (US) banh mi at Anan Saigon. Vice did a story on this place back in 2017. I checked them out online and they still seem to serve the sandwich that includes foie gras, duck breast, confit duck leg, and pate. Nothing to see here, PETA!

A little closer to home here in the US, you can go to Party Fowl in Nashville and get what they’ve named “Brunch For Two.” A 55oz bloody mary topped with two whole fried cornish game hens, two whole scotch eggs, eight fried okra, and whole avocado that will run you $50. I have a friend who has created some truly amazing bloody mary skewers, but even he would probably think this is ridiculous. Just put some cubed cheese on there and maybe some candied bacon and I’m good, y’all. 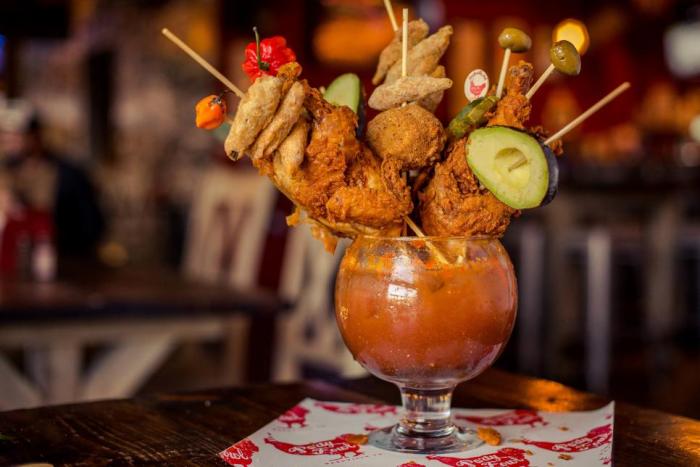 Here in New York, we’re home to Serendipity3, which has a special section on the menu for its Guinness World Record foods that all have to be ordered in advance. The $1000 “Golden Opulence Sundae.” I’m not even going to tell you what’s in it, it’s so dumb. Their $214 “Quintessential Grilled Cheese Sandwich” which, according to Guinness World Records, is served on two pieces of French Pullman champagne bread, which is made with Dom Perignon champagne and edible gold flakes, with white truffle butter and the very rare Caciocavallo Podolico cheese. The sandwich is served with South African Lobster Tomato Bisque as a dipping sauce. They have a pricey “Haut Dog” (ha ha, I see what you did there.) They also have a luxe milkshake, naturally. There are, like, 5 places in New York that serve milkshakes with so much stuff in/on them the waitress can’t even carry them to your table. They make the Pulp Fiction milkshakes seem quaint and reasonably priced. Poor ol Vincent Vega wouldn’t know what hit him these days.

What people are willing to pay for is often astounding. While I’m sure I could polish off a bowl of Phozilla with a couple of willing friends, I wonder what social anthropologists will make of this trend in the future. Will they excavate 21st-century privy sites, find bits of gold leaf and try to piece together what we were thinking? Will we find new precious metals and stones to garnish our foods? Emerald-encrusted baked potatoes? Root beer floats with platinum ingots floating in them? In a world where you can pay $200 for a grilled cheese sandwich, I guess anything is possible.

← Review: '32 Malasana Street' Brings Haunted House Horror Home | Reddit Asks the Question: 'Who Is the Most Punchable Person in Fiction?' →