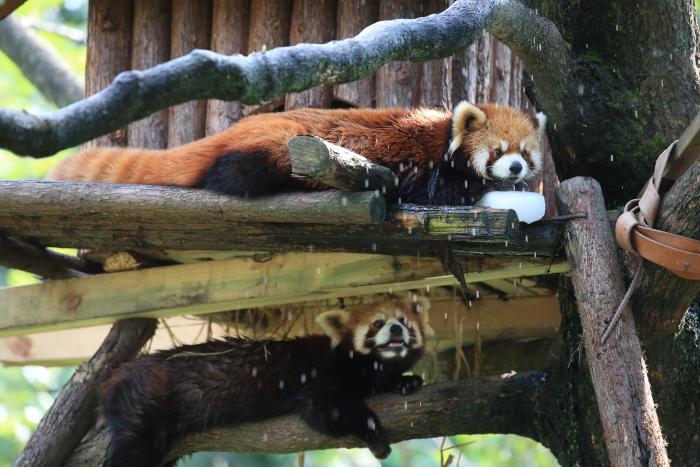 An Assortment of Good Environmental News, Because After the IPCC's Report, It'll Do

So, have the last few years been a barrage of horrible confirmations about the state of the Planet or what? The dire red warning issued by the IPCC earlier this week, well, is anyone surprised? And if you thought climate anxiety was bad in the Northern Hemisphere, imagine living in the global South when you realize you have jack-all political power compared with a white MAGA in some Houston suburb who owns both an F-150 and a Dodge Hellcat he doesn’t need and whose ever reddening skin should’ve given him an idea that perhaps all these environmentalist had his best interests in mind.

On the other hand, I live in a fairly mountainous country so … wait, the weather here is exactly the same as in California and the Mediterranean!

As someone who suffers from OCD and anxiety on a regular basis, I should know that its most damaging feature is paralysis. Sometimes very literally. And to snap out of it, you need a dose of endorphines or something to break you away from that circular reasoning, such as pictures of cute animals, a deep breath, dark or filthy comedy, or a run for those healthy freaks.

Climate anxiety is a problem. I have no real solution other than channel it in two ways, one complementing the other: 1) Anger, as a driver towards political action and 2) just digging for ANY good news on the environment, f-cking ANYTHING to snap you out and make you realize that there is still patria ciudadanos!

There is a reasonable argument that good environmental news is just a systemic effort towards collective greenwashing. It is partly true and we should not delude ourselves into thinking that we are simply on the 1941 or 1933 of the fight against the Climate Crisis. But it’s about cumulative efforts, and just like in the fight against the Nazis, we are against people who literally don’t care if everything up to 10 meters above sea level gets flooded.

I trawled the chirpy optimists at Reddit’s UpliftingNews, perhaps too naïve for their own sake, but it’s a good enough repository.

Category 1: Probably Corporate Empty Posturing, But They Might Accidentally Help the Greater Good Despite Themselves

I’m not gonna be snarky about this. It involves a very famous Gen Z beauty advisor, further credit to the generation. Actually, the cosmetic industry is starting to walk the walk regarding sustainable practices. More information in later installments, if I make this a regular feature. More information here and here in Spanish.

I mean, I bet they say that to all the anxious publics, but still, reasonable doubt goes both ways. Here is the list of the investment groups, and here are the contact pages for three of those so you can bombard them with GET YOUR FUCKING ACT TOGETHER AND DO SOMETHING e-mails.

Category 2: Oil and Coal Companies Getting the Shaft

I mean, I understand Liquid Natural Gas might be a good stop-gap measure, but coal? F**king coal? As it might not surprise you, the project would’ve threatened (that is, destroy) First Nations heritage.

A county in the state of Washington bans new fossil fuel infrastructure.

Great news coming from Whatcom County, WA, which hosts at least five refineries, which will also be subjected to restrictions. Now let’s go for the entire the state and let’s ban fossil fuel infrastructure too!

Category 3: The Transition Towards Clean Energy is Still Transitioning

Sigh … I’ll allow corporations to dig in here. After all, if the French Resistance had Anarchist, Communists, Socialist, and Conservative Catholics fighting together…

The fact that tidal energy is still not a thing everywhere (I remember reading about it in science magazines from the 80s) is yet another black mark on humanity. Look, this thing is actually no larger than a 747 and could power 2,000 U.K. homes. And those are European homes; they actually need the heating!

When one-third of your territory is the driest desert in the world, it would be a waste not to make use of that Solar Power. This one will produce enough energy for around 8% of Chilean homes.

Category 4: Maybe an Improvement in Our Wasteful Consumption.

Because stopping fossil fuel emissions is quite literally half the battle.

Now, do I believe this will work? Ehm, I’m cautiously optimistic. We recently banned plastic bags and… well, there are still places that resort to them but it has become harder to find one. We should get better at recycling, though. And as commendable as our efforts might be, we’re still just 20 million folks in a middle income country.

Now, I’m not saying I’m one of those Hugo Drax-style econutters that would rather see humanity extinct than endangered species, but I think we should make more and more room for wildlife.

As coronavirus reduced maritime traffic in Alaska, Humpback Whales were happier and lived their best lives.

At least someone had a good 2020, Humpies in Glacier Bay National Park in particular. And it should be food for policy regarding over-tourism. On the one hand, the people that live in unique, beautiful places have a right to make a living from tourism. But perhaps, maybe, just maybe, sending 100,000-ton cruise ships several times a season might defeat the purpose of nature conservation. There has to be a better way to balance it. How much noise do sailboats make?

Red Pandas are the best, and unlike their black and white namesakes (not biologically related), apparently, they make no fuss about mating in captivity. These cuties are fertile as hell.

That’s all for now. I might make this a regular feature, if the overlords allow it and if I can’t do this without grasping at straws. And remember, a lot of the Climate Crisis is on George W. Bush’s shoulders, too! His inaction on climate might even be a worse crime than Irak! Also, we can all do our part in making life a little harder for billionaires; they cannot opt-out of this one!

← Reddit Asks the Question: 'What is the Stupidest Injury You've Ever Gotten?' | I Read This Book About a Housewife Who Has Sex With a Hot Frogman & I Have To Tell You All About It →