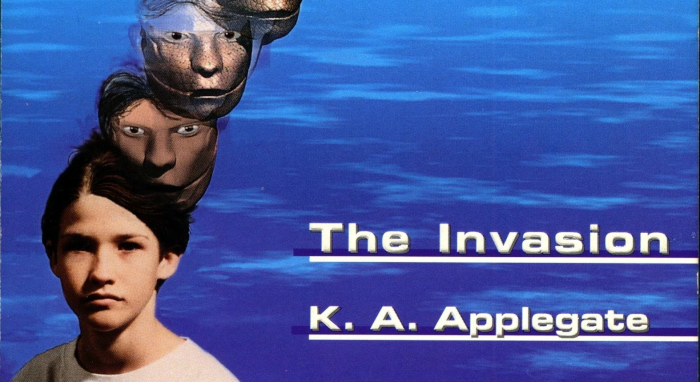 25 Years Ago, the Animorphs Saga Began and Changed the Face of Children's Fiction

Any bookworm who grew up in the ’90s can point to a handful of novels and long-running series that forever permeated their brains. One of the great joys of being a kid who liked to read was that you could rest easy knowing that you would never run out of stories. If you discovered a new author then the chances were that they had a vast back-catalog to explore, or at the very least, they were part of a brand that expanded well beyond their own work. My school library had seemingly endless Point Crime titles that I devoured ravenously before moving onto Point Horror. Every kid I knew was reading Goosebumps and seldom the same book twice. But there was one series that loomed large above the others, the king of the long-running kids’ series before wizarding worlds took over and children’s fiction made its great shift into the 21st century: Animorphs.

K.A. Applegate’s sci-fi adventure stories remain instantly recognizable to an entire generation of readers, in large part thanks to their gripping and often disturbing cover art. They offered a high concept promise to intrigued kids: stories of regular children with the extraordinary ability to turn into animals. Even if the covers freaked you out — and they certainly were unnerving in near-Cronenbergian ways — you couldn’t deny the allure of that plot. The story revolves around five kids — Jake, Marco, Cassie, Rachel and Tobias — who stumble upon an injured alien named Prince Elfangor. He explains to them that Earth is being invaded by a race of parasitic aliens called the Yeerks, who infest humans’ brains and control their every move. He needs their help in defeating the Yeerk scourge, so he passes onto the children the ability to become any creature they touch by absorbing the creature’s DNA.

How could anyone resist that? Over the course of five years and 54 books (plus several spin-off titles, some video games, and a TV series), the Animorphs series evolved from a fun lark with a vaguely campy set-up into one of the most unexpectedly bleak narratives in the medium. Applegate, a long-time children’s writer and Newbery Award winner, delved into some tricky territory that, as an adult, I look back on with a kind of awe. Every now and then, some faux-concerned parent does a think-piece or gets some minor press attention for claiming that children’s fiction has gotten too dark and scary for precious ickle kids. It’s a claim that only becomes more ludicrous when you recall how Animorphs sold the nation’s youth an anti-war tragedy on the evils of imperialism with themes of body dysmorphia and full-on genocide.

The ability to turn into an animal is a thrilling one for these kids, one that any reader could understand, but with it comes some terrifying possibilities. If the kids don’t turn back into a human after two hours, they’re stuck in their new form permanently, a fate that befalls Tobias. He ends up spending a large chunk of the series as a red-tailed hawk, and much of his perspective focuses on his conflicted feelings over his fate. It’s implied that he deliberately didn’t change back so he could remain a bird, and when, thanks to some classic alien god meddling, he returns to being a human, it causes him pain. He feels trapped as a human, missing the freedom his other form gave him. It’s no wonder that the character has become a favorite among transgender readers, as noted by Cassius Adair for the Los Angeles Review of Books. As he writes, ‘much of Animorphs is about living in stealth.’

This also comes through in the novel’s themes of paranoia. The kids can’t trust anyone with their secret, and they are essentially alone in dealing with the secret invasion of their planet. Everyone is at risk of being taken over by the Yeerks, including loved ones. In the second book in the series, The Visitor, Rachel discovers that one of her friends’ parents have been taken over and she bursts into tears knowing that they don’t love her anymore.

Things often got incredibly traumatic for the kids too. They had screaming nightmares and often received horrific injuries (all cleaned up nicely by their morphing healing abilities, of course, but that didn’t exactly make it easier as a kid to read about someone getting clawed to pieces.) While some of the kids struggle with their bloody obligations, others, like Rachel, begin to relish the violence. They drift apart from the people and hobbies they once loved, so consumed by their new duties and the trauma that accompanies it. Some found themselves far too adept for the terror of war. If you were picking and choosing books to read from the series - and they were pretty easy to dip into as a casual visitor to this world - then you may not have understood the true scale of this trauma. For those who stuck around until the bitter end, however, it was unexpectedly overwhelming. I remember some of my friends complaining that the characters stopped being entertaining in later books, which was of course the point but remained a tough pill to swallow if you just wanted animal transformation fun-times.

Applegate used a number of ghost-writers to help her with the immense workload of this series, a detail that weirdly shocked me as a child. It was like finding out that wrestling was a performance or that the contestants on Blind Date didn’t come up with their cheeky answers on the spot. The final book, however, The Beginning, was all her. And boy, it’s dark. The war ends but the damage doesn’t. The trauma remains and the aftermath of mass genocide leads to serious geopolitical fallout. Ultimately, the conclusion to five years and dozens of books isn’t a triumphant roar but a cliffhanger that implies the ultimate sacrifice, one that will probably still be worthless in the long term. Some kids were upset and many parents were furious, to which Applegate succinctly responded:

‘So, you don’t like the way our little fictional war came out? […] Fine. Pretty soon you’ll all be of voting age, and of draft age. So when someone proposes a war, remember that even the most necessary wars, even the rare wars where the lines of good and evil are clear and clean, end with a lot of people dead, a lot of people crippled, and a lot of orphans, widows, and grieving parents. If you’re mad at me because that’s what you have to take away from Animorphs, too bad. I couldn’t have written it any other way and remained true to the respect I have always felt for Animorphs readers.’

Just learned about this letter K.A. Applegate wrote to fans about the end of Animorphs, and it is good. pic.twitter.com/zG2Xqm1kVn

Even now, it’s easy to look at Animorphs and roll your eyes, especially when those covers keep going viral or are memed to the teeth by younger generations who never grew up with the books. The series has long been out of print, meaning it’s unlikely they’ll be rediscovered by young readers who could sorely use such stories in their lives. For people of a certain age, however, the memories linger and the themes resonate now more than ever.

← After 30 Years of Futility, a New 'Fletch' Movie Finally Gets Off the Ground | Apple TV's 'Physical' Review: A Flailing Exercise in Self-Loathing and Shame →