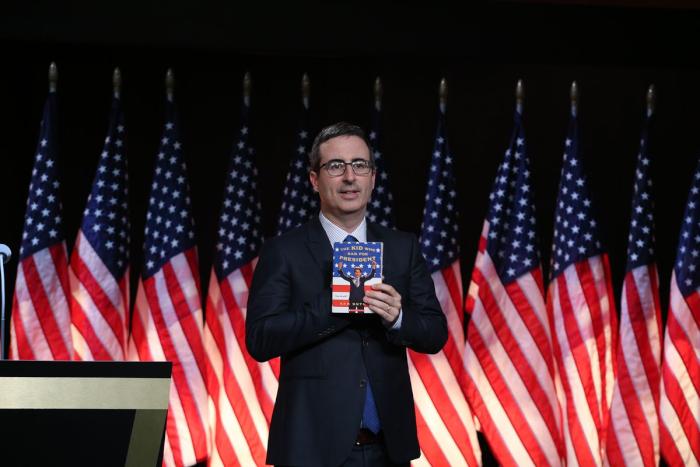 Find Something You Love As Much As John Oliver Loves America, Apparently

I’m going to cut to the chase: you should find something you love as much as John Oliver seemingly loves the United States.

Because not only did Oliver leave his home for his love, he has decided that he wants to be with America for the rest of his life. He’s spent the past twelve years working here, creating a life here, finding one of America’s many daughters to fall in love with, and ultimately impregnating her. As one does when one falls in love with a country. Keep in mind, of course, that he did all that under a Bush and Trump administration. He wanted so much to be a part of this country that he was willing to take us even as our crazy, racist uncles sat at the holiday table and screamed about immigrants ruining the country. That’s how much Oliver loves America.

And because this wouldn’t be an Emily post if I didn’t ruin things (I’m a ruiner), I’d also like to remind you that Oliver spent twelve years proving his love to this country by choosing to be here, but also by jumping through all of the extraordinary hoops that we require of immigrants to become citizens. Keeping in mind that Oliver had advantages like speaking English as his first language, having an employer who could assist with the tremendous amounts of paperwork required to keep one legally able to work in this country, enough money to hire lawyers to help keep him legally able to be here, and also a little thing like having a wife and child who are both American citizens, and it was still enough of a nightmare ordeal that he had to do a whole topic on how totally jacked our immigration system is. It’s almost as if the powers that be recognized that if they create a system that is nearly impossible to navigate, people will find other venues in order to find security and safety. That if the powers that be create “a system,” regardless of how completely shitty that system is, they can later find people at fault for not submitting to the system that requires a dozen years of your life, money, and energy. Like they figured out a way to game the system so that people couldn’t work within it as hard as they tried. I mean, IT’S ALMOST LIKE A LOT OF RACIST UNCLES CREATED RULES TO PREVENT PEOPLE THEY’RE RACIST AGAINST FROM COMING INTO THE COUNTRY AND THEN THEY BLAME THE NON-WHITE PEOPLE FOR “CHEATING.”

← Twitter Reacts To NASA #BroomChallenge, Which Yes Is A Hoax With No Tie To NASA | Unrelenting Sexual Tension Between John King and Dana Bash and Democracy in Action Tonight on CNN →