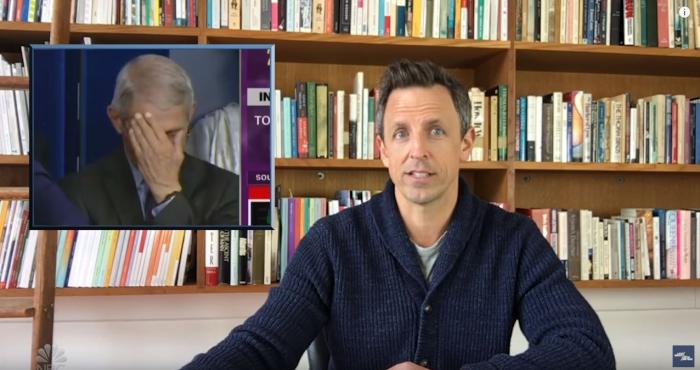 Exhausted Seth Meyers Is All Of Us

I can’t tell you how unbelievably thrilled I am that Late Night With Seth Meyers is continuing to air their show as much as possible given our new bizarre normal. Not all of it is just that Seth Meyers is dreamy (although he is very dreamy), and not just because he and his team are very, very good at their jobs. It’s that, similarly in the way that John Oliver is playing Reassuring Dad, Meyers is playing Older Brother’s Hot Friend Who Keeps Saying All Of The Snarky Things You’re Thinking. To wit:

I mentioned on Monday that last week was a bit rough for me. I’m bad at change and genuinely dislike having to adjust my daily routine. Add to that that I moved apartments recently, and I was just kind of all over the place. But as the new routine set in and I became more accustomed to how to handle social isolation, a new feeling set in. One directed at the President, but unlike a lot of feelings I had (rage, disgust, fury, embarrassment, anger, disappointment. Really all of the words that mean “You’re a bad person.”) about the president before.

I just need him to get out of the f*cking way.

See, we’re all scared right now, and we’re unable to cope with it in the ways that we usually do. And that’s hard. Even harder is not having a clear and effective leader who can at least make us feel like we’re all in this together. Trump isn’t able to be a good president, but we’ve known that. Now it’s to the point where him being such a terrible president is draining what little patience I have left. Seth Meyers, through his rant about birds and the superiority of teenagers at making YouTube videos, is conveying my feelings during the current step of the pandemic. I’d like to speak now directly to Donald Trump.

HEY. CAN YOU GET YOUR F*CKING SH*T TOGETHER? WE’RE ALL STUCK IN THE MIDDLE OF A F*CKING CATASTROPHE, WE’RE ALL TRYING OUR GODD*MN HARDEST, AND WE’RE ALL SCARED SH*TLESS (WHICH IS A PROBLEM BECAUSE OF THE TOILET PAPER HOARDING). IF YOU CAN’T BE THE PERSON THAT WE TURN TO FOR REASSURANCE, DIRECTION, AND COMFORT DURING THESE TIMES, CAN YOU AT LEAST NOT BE ONE. OTHER. F*CKING. THING. WE. HAVE. TO. DEAL. WITH?

I mean, he super won’t because he’s terrible. He’ll continue to abuse journalists, blame governors for not doing his job well enough, and generally making a giant ass of himself and the country during a literal world-changing event. He won’t be able to not make things worse, but at least Seth will be there to voice that for us. Also, I’m genuinely thrilled that Meyers has that many books. I knew he was a smart one.

← Anthony Fauci Provides Sobering Comfort, and Hoda Kotb Gives Us an Outlet for Our Emotions | Meet The Goop Contributor Who's Decided The Pandemic Is Fake, Just Like AIDS! →