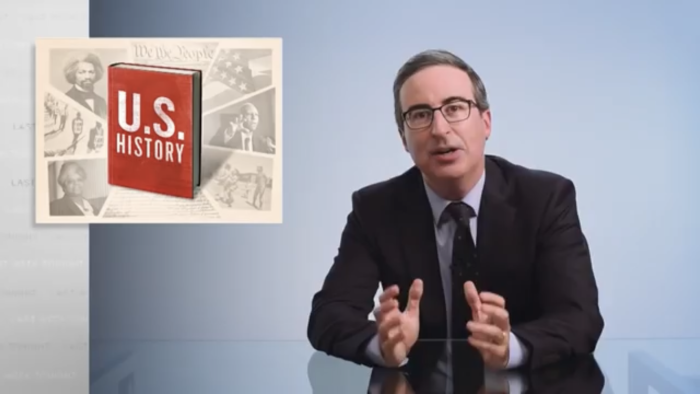 ‘Last Week Tonight’ Urges a Reexamination of US History

The United States of America has a fraught relationship with its own history. Facts about its creation and progress are often misrepresented or outright lied about. Schools are continuously faced with this the most heavily, as John Oliver pointed out this week on his show, Last Week Tonight.

During this week’s program he devoted almost 30 minutes to the discussion of US History and how the nation will often attempt to bury its most shameful aspects. The Tulsa Massacre, for instance, is often not taught in schools and wasn’t openly discussed until it was presented in a popular TV show. The Massacre is not discussed to such a degree that people who live where it took place are sometimes not even aware of its occurrence.

Oliver offers many examples of how US history is presented to Americans in a more flattering light than deserved and how that starts in the schools. Curriculum for the past hundred years has been curbed to highlight American Exceptionalism by both teachers and parents.

There are ways to avoid continuing this terrible trend, as John Oliver explains. These include acknowledging White Supremacy for its dangerous prevalence, admitting that America’s progress is not always constant and connecting the dots to current events. He then presents inspiring words by the late John Lewis. The piece is incredibly moving, eye opening and worth the watch.