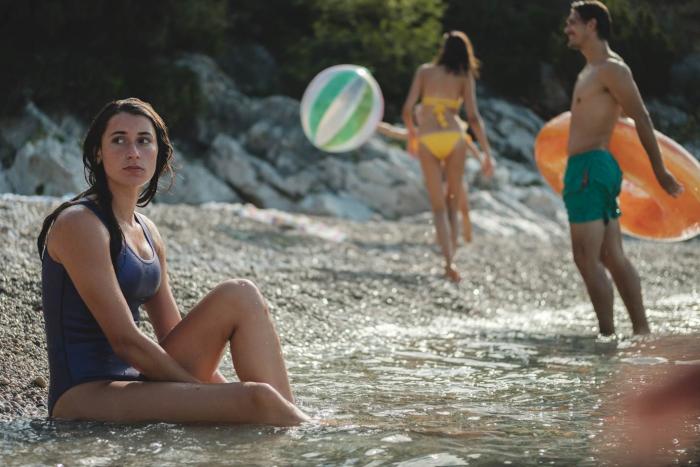 As expected, James Cameron’s Avatar: The Way of Water is currently making huge (ahem) waves at the box office. I haven’t seen it myself, and I don’t intend to. It’s undeniable that Cameron is a genuine visionary who’s made some of the best action films of all time, but the first Avatar film is emphatically not one of them. It’s hardly an original criticism to say that the 2009 mega-hit was a visually impressive yet fundamentally facile and unengaging slab of cinema. ‘A glorified tech demo’ is the way I’d heard it described by someone a the time, and it’s still the best summation of my issues with it. It’s true that against the backdrop of the Marvelification of modern cinema, the Avatar films now perversely feel like a throwback to a simpler, better time, but there’s still nothing that is drawing me to actually go watch The Way of Water.

Well, OK, that’s not quite true. There is one thing that made me consider it briefly: The water. The aquatic focus of the story. The whole water-ness of it all! I am a massive sucker for stories set around water. I’ve not yet managed to put into words why that is, but if you’ve got a story set near, or centered around, water, chances are I’m gonna be at least a little bit interested. I think it’s a big part of why my favorite Studio Ghibli film is Porco Rosso. I don’t think it’s the best, but it is the one I return to most often, and the setting is a key reason why that is. That damn Adriatic scenery. It just can’t be beaten. This water love manifests itself in other ways, one of the most prominent of which is the fascination I have for docks. Whenever I visit a new city, one of the main items I need to check off my list is to find out if they have some sort of docks—and to go and pay a visit if they do. There’s just something about docks that gets me all giddy and paints a grin on my face. It’s like London snowfall, which, whenever it happens once in a blue moon, instantly turns me into a kid.

Since Avatar: The Way of Water’s release, I’ve been reading all the evocative descriptions of the incredible ways that Cameron depicts water in the film, using all the world-best technological muscle that he can muster to conjure up a society centered around water. I’ll be honest: It was starting to have an effect on me. Despite my formidable disinterest in the film, all that water talk had me starting to get curious about it. Luckily for me, something else came along to satiate that need, and now any temptation to go see ol’ Jim’s grand CG ride has receded like the tide.

That something is a film called Murina, which ticks both the ‘water-centered story’ box as well as the ‘damn good film’ one. Directed by Antoneta Alamat Kusijanović from a screenplay by Alamat Kusijanović and Frank Graziano (and exec produced by Martin Scorsese), Murina is a Croatian family drama that debuted at the 2021 Cannes Film Festival, where it won the Caméra d’Or. Released in the US on July 8th, 2022, if I had seen it before the ballots were submitted, I would have 100% put it forward as one of my top films of the year.

Murina follows teenager Julija (Gracija Filipović), who lives on an island off the Croatian Adriatic coast with her parents, Ante (Leon Lučev) and Nela (Danica Čurčić). A keen and gifted diver who also dreams of a life away from the beautiful yet provincial surroundings that she has known her whole life, Julija is a richly observed portrait of adolescence, and newcomer Filipović is mesmerizing in the role, expertly communicating the waves of emotions that affect her character, both on her face and via her body language. The cast that surrounds Filipović is equally excellent, with (the also Avatar-sequel-starring) Cliff Curtis on particularly fine form here as a wealthy friend (or is he?) of the family, whose visit to the island sets off the chain of events that drive Murina’s plot forward.

It wouldn’t be an exaggeration to say that Julija’s father, Ante, is a bit of a tyrant. Obsessed with closing a deal over some land that would see him sell up and move his family to Zagreb, more often than not he treats both his wife and especially his daughter as annoying obstacles in his way. His repugnant behavior is greatly exacerbated by the emotional storm that arrives with Curtis’ Javi. Javi is the key to Ante’s plan, and convincing him to invest in the venture becomes the be-all and end-all for Ante. Things aren’t made simpler by the complicated past that Ante, Nela, and Javi share, as well as the history of the little town that the former two live in. Add into that Julija’s transition into womanhood and her mounting refusal to be walked all over by her father and you have a treacherous set of hidden currents lurking under the picturesque surface that threaten to pull everyone under.

Films like Murina make me incredibly happy. They are, to me, what cinema is meant to be about. Resonant stories full of rich emotion and complicated humanity. To think that this is director Kusijanović’s debut feature is mind-blowing, so confident is her command of character and tension, and she brings the excellent script to life. The camera lingers on faces and bodies for exactly the right amount of time, letting us connect and wonder and be drawn into these people’s inner lives. The cinematography by Hélène Louvart (The Lost Daughter) helps, as she shoots the Adriatic in a way that does justice to its stunning views. Crucially, these aren’t just purposeless tourist snaps either, the landscape is entwined with the characters and their stories in a fundamental way, and the film understands and communicates that. Water is everywhere in Murina. It’s life and it is death. It’s freedom but it is also a prison. See this film.


← The Art Of Falling Asleep With the TV On | The Size of Remote Controls These Days: A Measured Response →