With audiences stuck at home, truly wild digital content is all the rage. Consider Tiger King, the Netflix true-crime mini-series that delved into a sordid tale of kooky characters, deeply bizarre business decisions, lions, tigers, and crime. If you’re craving more misadventures of animal enthusiasts who make terrible, horrible, no good, very reckless choices, you should seek out Roar, also known as “the most dangerous movie ever made.”

Roar lives in infamy as a critically scorned box office bomb as well as a painful vanity project from a couple of Hollywood big shots who risked their hides and much, much more for 11 years to get it completed.

It was made by power couple Noel Marshall and Tippi Hedren. He was an executive producer of the horror hit The Exorcist; she was a leading lady of Alfred Hitchcock’s The Birds. Together, they shared their lives, children, and a deep love of wild animals. Then, they decided to share all three with the world in a film unlike any seen before.

Released in 1981, Roar follows a Chicago family who movies into a nature preserve in Tanzania, where lions leap across furniture like house cats and want in on bathtime with naturalist/patriarch Hank (Marshall).

This is Marshall’s first and only screen role and it shows. Most of his performance is yell-improvising as he mocks a local (Kyalo Mativo) for fearing these big cats. The rest is the brash buffoon wrestling fully grown lions while insisting everything is totally chill. It’s like Jackass meets Judd Apatow’s cut scenes, but minus any star power, charisma, or humor. 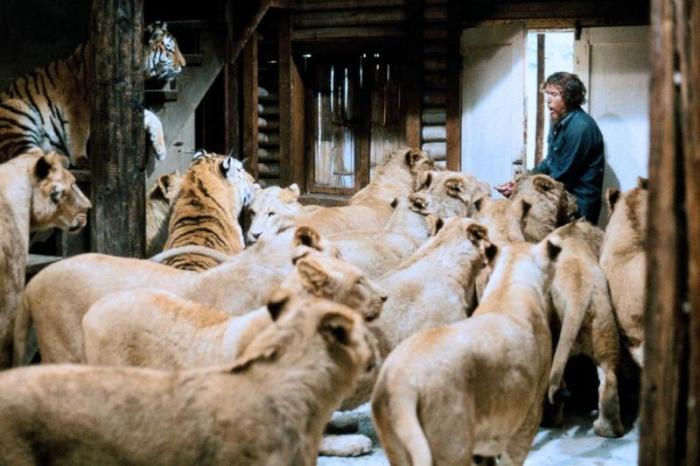 The “plot” of the movie is that Hank’s family is coming to join him at the reserve. However, he is late picking them up because lions gonna’ lion. By that I mean, they maul some hostile visitors. No matter! Hank has a quick bath (with the lions) then after some more antics involving a tiger-stuffed convertible, he is on his way. Once he’s left, his wife (Hedren) and children (Marshall’s real-life sons John Marshall and Jerry Marshall, and his step-daughter Melanie Griffith) arrive and are shocked to discover their new house is crawling with lions, tigers, and jaguars.

As a director, Marshall tries to make slapstick silliness out of his family screaming and fleeing from big cats. There is a motorbike chase, hiding in water barrels, Hedren getting her face licked by a jaguar, and a rampaging elephant scene. However, you can’t really direct lions. So—as the opening title card proclaims—these furry and ferocious felines (and all their untamed co-stars) share writing and directing credit with Marshall. 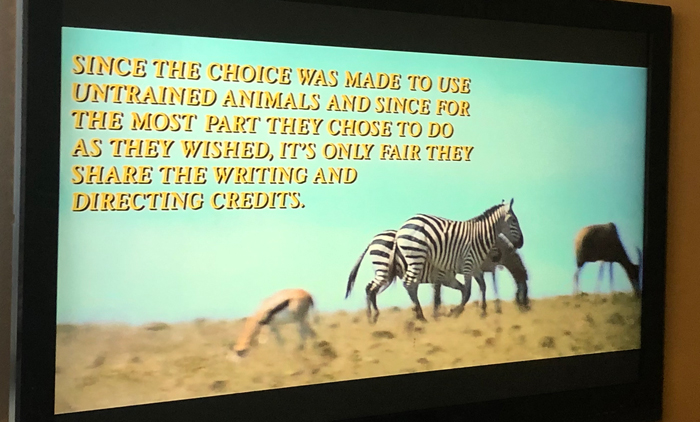 Frankly, this seems like he’s trying to share the blame because the critters and the family have all the comedic timing of a drowned rat. Plus, there’s an inescapable tension to the fact you know you’re watching real live predators playing with jaw-droppingly naive prey. 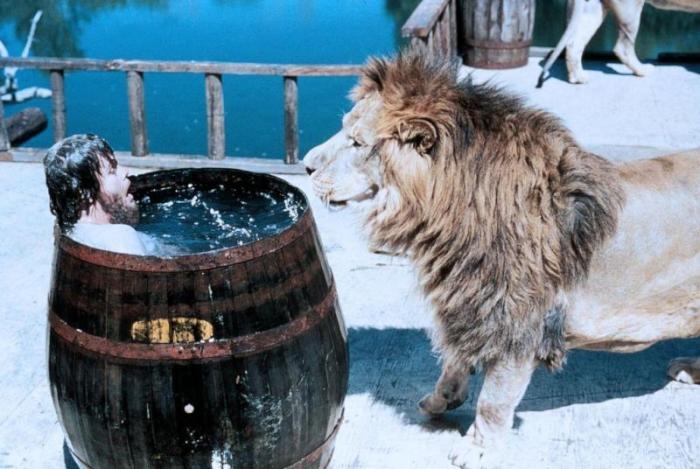 As you might guess, there were many injuries on set. Among the most infamous: A lion named Cherries attacked Hedren, wrapping its jaws around her head. The same lion scalped cinematographer Jan de Bont, who required 220 stitches. Another lion mauled Melanie Griffith so badly that she needed facial reconstructive surgery and nearly lost an eye. Hedren’s leg was snapped by an elephant. Marshall’s hand was bit through by a big cat, and doctors warned they might need to amputate. Hedren has said that over the course of shooting, Marshall “was in the hospital so many times they were going to name a wing after him.”

Roar was supposed to take nine months to shoot but stretched into six years. In that span, 70 members of the cast and crew were injured, and yes, several of these attacks can be seen in the film! “It’s amazing no one was killed,” Hedren later admitted, while insisting the reported figure of injuries had been exaggerated. However, the Marshall family insisted no animals were harmed in the film’s making, proclaiming the American Humane Association Seal in Roar’s opening. 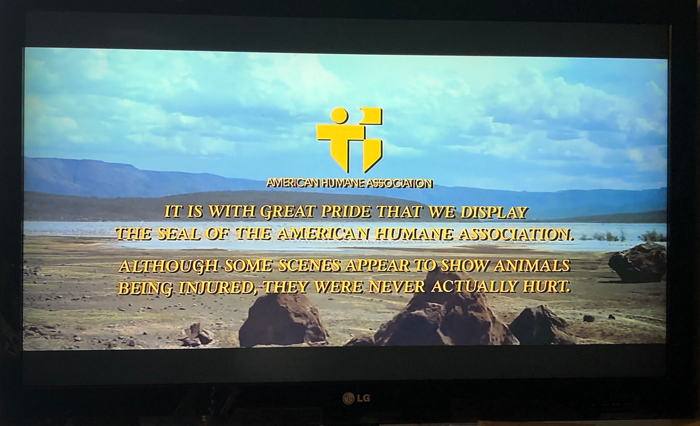 Why did it take 11 years to finish Roar? For one thing, it takes a lot of time to illegally acquire the scores of big cats the Marshalls needed for their vision. In a 2015 interview, John Marshall explained the film’s origins, saying, “In the beginning, dad and Tippi went to Africa to do a movie…they went to Zimbabwe, and they saw a house overrun by lions, a game warden’s place. And they said, ‘Wouldn’t that be a nice idea? We’ll do a Hollywood movie about that. We’ll get our family together, we’ll have some lions and the family will come and visit and it’ll be great.’”

Great. However, the Marshalls soon realized no legit animal wrangler would allow that many big cats to be brought together on one set. So they started buying their own. “We were collecting cubs and we were raising them in Sherman Oaks,” John said. “It took six years to [shoot the film]. By then, we had about 100 lions.” 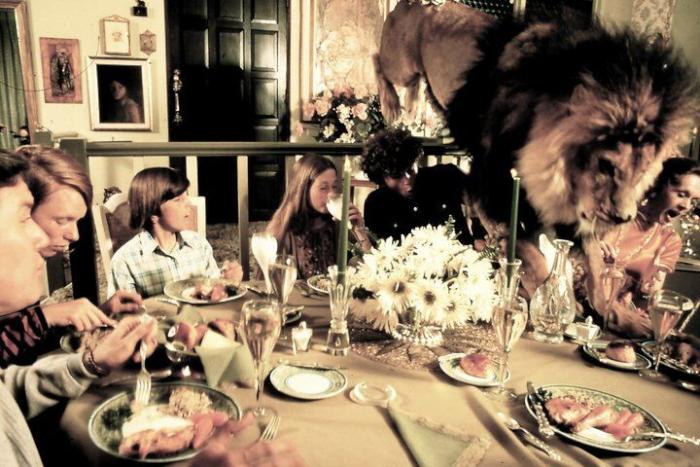 Sherman Oaks police weren’t pleased to learn about the big cat living in the Marshall residence. In 1972, the lions and tigers were ordered removed from the property. So, the Marshalls purchased land in Soledad Canyon and hired non-union workers to build the houses that would become the sets for Roar. Why non-union? Union workers might snitch.

Between purchasing land, building sets, and buying exotic animals, the costs were soaring for Roar. That was before a flood did $3 million worth of damage on the sets and on-location postproduction facility. That wasn’t the worst of it. “It was devastating,” John remembered. “Fifteen of the lions and tigers got loose and the sheriff shot Robbie, the lead lion.”

So that opening title card about the animals being unharmed? They were lyin.’

The Marshalls set out to make a movie that showcased the glory of these incredible creatures and might inspire a conservation conversation. However, the film’s intended message is drowned in white people nonsense and human hubris. Marshall risked his limbs and life as well as those of his family and employees, and it cost him dearly. To maintain the crew and feed all the animals, Marshall had to sell four of the family’s houses. Hedren sold a fur coat that Hitchock had gifted to her for The Birds. Marshall’s commercial production company went bankrupt, and it took several years to cut the barrage of bonkers footage into a barely coherent narrative film.

Long before it was completed, Roar was already seen as a catastrophe with many wondering why the Marshalls were continuing on with it. In 1977, Marshall told The Montreal Gazette, “We have been on this project now for five years. Everything we own, everything we have achieved, is tied up in it. Today we’re 55 percent complete. We’re at a point where we just have to do it.”

Roar was finally released in 1981, but not in North America. Hedren claimed this was because domestic distributors wanted a “lion’s share” of the profits, which she’d intended to go to conservation efforts. However, in a 2015 interview, Roar crewmember Terry Albright said the film couldn’t be released domestically because of how the Marshalls had flagrantly broken union rules throughout its making. Roar only played overseas, pulling in $2 million dollars. Its budget was $17 million.

Over the decades, this film earned a cult following for its outrageousness on and off-screen. Then in 2015, American audiences could see Roar in theaters for the first time, courtesy of Alamo Drafthouse. This fresh focus on the film allowed for a lot of its secrets to spill out in interviews, like those quoted above.

Now, you can witness the horrors and wonders of “the most expensive home movie ever made” through Alamo-At-Home. The digital screening series replicates the vibe of the Drafthouse’s Weird Wednesdays by offering rental titles that may not be good but are definitely wild enough to be worth the price of admission.

Roar is available for Vimeo rental.