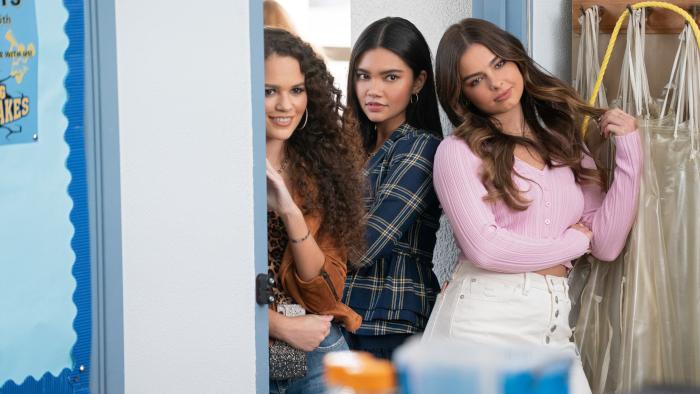 With the 'He's All That' Trailer, Netflix Crossed a Line

Sorry to do this to you, but please meet me on the other side of this trailer:

I sincerely apologize for having subjected you to that. Well, no I actually don’t. Exposing unsuspecting audiences to terrible trailers is one of the few, guilt-free evil things one can do.

Netflix crossed a line here. And no, not because I consider it a heresy to remake She’s All That. Let’s face it, that movie was terrible then and it’s still terrible now. Delightfully terrible, like most mainstream movies geared toward teenagers in the late ’90s and early ’00s. They did, however, provide material for the Last Great American Movie Spoof, that gem called Not Another Teen Movie, underappreciated during its time, which had this iconic scene involving a familiar face:

I’m also not here to sh*t on the cast of Zoomer costars, who all seem pretty talented and/or have had remarkable careers so far, and are doing their best with the material. Also, I’m not here to sh*t on Addison Rae. She can tank herself on her own. And no, I’m not an old fart. I know she is one of those TikTok stars made famous because the algorithm favors beigeness.

No, you see, Netflix’s crime here is that, after years of people half-jokingly claiming they make movies solely for the algorithm, they actually made one. Every single thing about this movie is catered to feed its own social media visibility. This is the Netflix equivalent of those guys who post five 20-minute long videos a day ranting about Brie Larson.

There is no way this isn’t the product of a frantic board meeting by 50-somethings, scared off their rockers after reading one of those articles about Zoomers preferring TikTok to movies or something. As if teenagers had ever been known for their attention span. So, instead of cultivating their audience and giving us a G.L.O.W. movie to cap off the series, they decided to get a jump on early ’00s nostalgia, as it rears its whale-tail on the horizon, by remaking a very ’00s movie (why would we even want to look fondly on that decade? I can’t even). Then, they hired the most generic of TikTok stars, filled the rest of the cast with actors from popular Netflix properties, threw in a member of the original cast in a thankless role, and got a Kardashian cameo. This wouldn’t be complete, of course, without updating the plot and making it about influencers. A plot that is literally based on Greek mythology. Oh, and for further clout, they got the director of a classic high-school movie from the ’00s, even though his directing is probably the seventh reason why that movie is a classic.

Don’t be surprised if at least 20% of the runtime of this movie is made of TikToks, which … isn’t that Netflix hoisting itself by its own petard? They are making content for their competition. Also, what the f**k is this thing of having Rachael Leigh Cook in the role of the protagonist’s mother? She’s only 41 and looks 27 for f**k’s sake! Yes, technically she could be the mother of a 17 or 18-year-old. Kinda young when she had her, but not dramatically so. Still, can we please stop forcing 40-something actresses into the “plays the mother of teenagers/twentysomethings” phase of their careers?

Also baffling is the look of it. Why is this movie shot like The Hills or Laguna Beach? Is the director trying to go for a documentarian feel because… the movie is about an influencer? Compared to this, the Kissing Booth looks like… Vittorio Storaro. Also, isn’t that the school from American Vandal?

This will be atrocious. It will also spend weeks on Netflix’s Top 10. And once again, it’ll perpetuate the notion that content for teenagers is shite. But that’s only because Hollywood execs underestimate them. Netflix, however, has actually raised the bar in content for teenagers, with series like Sex Education and Never Have I Ever. Then, why do they keep disrespecting their teenage audience with their movies?

Oh god, now I am worried someone will produce a spoof of Netflix teenage movies. It will be terrible, full of boomer jokes about wokeness, and characters making explicit observations about their clichés, instead of actually making jokes.

← Kristen Schaal Was Once Fired from 'South Park,' Which Just Re-Upped for Fourteen (14!) Movies | Conan O'Brien's Deep New Podcast Voice Is Sure To Whet Your Appetites →