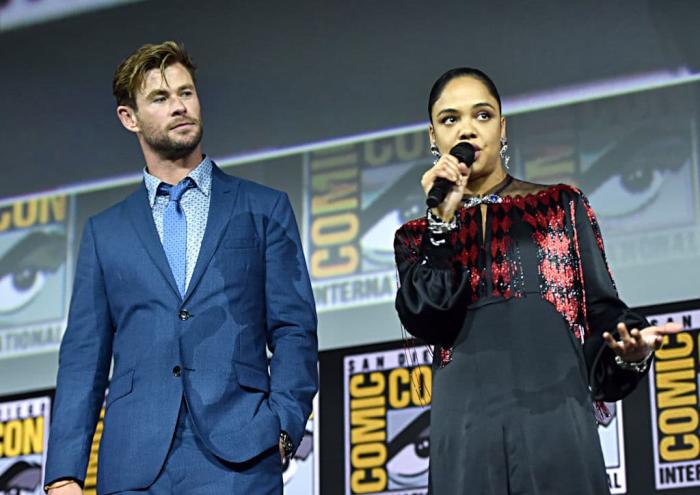 Will Marvel Ever Truly Make an LGBTQ+ Friendly Movie?

There was much excitement over the past weekend related to Marvel Studios’ triumphant return to Hall H of San Diego Comic Con. Their post-Avengers: Endgame victory lap was accompanied by a slew of announcements, some surprising and others expected. Disney has ensured that fans won’t be short of Marvel content for the next couple of years and that their slate of heroes has become more diverse than ever. White men are in the minority for the cast of Eternals, fans will finally be introduced to Shang-Chi, Natalie Portman will pick up the hammer and become Thor, and Mahershala Ali revealed his status as the new Blade. During the announcement for Thor: Love and Thunder, which was arguably the evening’s most enthusiastically received title, Tessa Thompson said that her character Valkyrie would soon be seeking her queen to help her rule over Asgard. The crowd went wild and there it was: Marvel was finally getting an LGBTQ+ main character. Not a presumed straight hero with vague queer coding. Not a nothing little side character with no name. This is Valkyrie and she’s getting a girlfriend. That’s progress. So why do I feel so hollow about it?

One of the most disheartening aspects of our media monopoly dominated cultural landscape is the way that societal progress and the plights of marginalized communities become bartering tools for profit. Alas, this is capitalism in a nutshell, but it’s through the movies I consume that the issue feels especially glaring. Cishet white maleness remains our cultural default mode, particularly to Hollywood, which sees anything outside of those smothering restrictions as ‘too risky’. When we eventually get the crumbs of diversity, however poorly handled or misrepresented they are, our instinctive reaction is to gobble them up and be thankful because we’ve no idea when we’ll get them again. Moreover, the very act of such blind consumption becomes its own bastardized political act. There are ten superhero movies led by men and one of them flopping doesn’t write off an entire gender, but there was an acute pressure to go see Captain Marvel and Wonder Woman because we’ve seen before what happens when the one female-led blockbuster doesn’t do ‘good enough’.

The exhausting and deeply insidious minefield of the discourse surrounding this issue has made things all the harder for everyone involved. Captain Marvel didn’t get to just be a movie. Neither did Black Panther or Crazy Rich Asians or even Aladdin, to a lesser degree. They were examples to be made of and tools to be weaponized by the worst crowds. You had to be with Carol Danvers because to be against or even express mild ambivalence would only bolster the misogynists trying to turn a corporate entity’s military-industrial complex supported product into a referendum on feminism. I remember when Anita Sarkeesian’s Feminist Frequency video series on sexist tropes in video games exploded into an outright hate speech campaign. You couldn’t turn a corner online without seeing a gaggle of anonymous men screeching about Sarkeesian’s supposed plans to profit from the oppression of poor men who just wanted to see some pixelated boobs in their favorite game (or whatever their conspiracies were, it’s been a while). There was much to be angry about here, and truthfully, we live in a post-Feminist Frequency internet whose most poisonous elements have their roots in that chaos known as G*merG*te. One side-effect of this inescapable hatred was the inability to express nuance. I would have loved to engage in conversations about Sarkeesian’s work and the stuff I did and didn’t agree with, but every-time I tried to do that online, some creep would barge into my feed and try to appropriate my words as proof they were right about her endless evils. So I just stopped talking about it. The very people insisting Sarkeesian’s work was pro-censorship were always the ones forcing me into silence on the topics at hand. The irony escaped nobody.

We saw this happen with the Ghostbusters reboot too, among many other aspects of our pop culture. We become so protective of the scraps we receive, and so weighed down by the responsibility to ensure we don’t lose them, that we’re afraid to be cynical. I don’t want to be pessimistic about Marvel truly introducing an LGBTQ+ character and romance but I’m also painfully aware of how this business works and how corporations want to do the least while positioning it as the most. Remember how excited the Russo brothers were over a two-minute scene in Endgame involving one of them casually mentioned they had a boyfriend? What should have been a fleeting but appreciated moment was elevated to ground-breaking and LGBTQ+ fans were expected to lap it up as if Captain America had got it on with Bucky during the climactic battle (Kristy explained why it was bullsh*t in this post). That moment was brief and utterly inconsequential. It was designed to be easily ignored and easily removed.

This is the disheartening truth of the Marvel issue. This is a multi-billion dollar entity heavily reliant on foreign box office to achieve its goals of raising the share value of its parent company, one of the most beloved and powerful entertainment structures on the planet. They make very expensive movies that are part of a wider franchise that is designed to appeal to as many people as possible. Diversity and inclusive storytelling have proven to be a commercial boon for Marvel, but it took them years to get there because they were beholden to the dated wisdom that ‘key demographics’ would not want to see such stories. As that applies to LGBTQ+ characters and narratives, it’s hard to ignore the reality of their business. Marvel and Disney don’t want their films to be banned in China or Russia or other major international markets where they’ve built the foundations of their entire economic model, so if Thor: Love and Thunder has a queer character, they probably won’t make the final cut in those territories. Disney will comply with the censorship demands because they won’t want to lose hundreds of millions of dollars in revenue. They may release a statement condemning the decision to save face but they won’t pull the movie in protest.

This display of cynicism is not to say that you can’t be excited about the prospect of seeing Tessa Thompson as a proudly bisexual Valkyrie in a major movie intended for general audiences. This is still a sign of positive change, however maddeningly incremental it is. It is okay to be both happy that this is happening and frustrated that such a sliver of progress will be vaunted to deified status, regardless of how calculated or mistreated it is in the long-term. The sad reality of this industry, driven by profit and appeasement of forces darker than we may fully understand, does not allow for the kind of truly radical and progressive storytelling we crave, or at least it doesn’t on such a grand scale. We should demand better, particularly from a company like Disney that has more money than I can conceive of and are in the perfect position to take this kind of leap. Unwavering support for corporations in the hopes they’ll acknowledge the existence of marginalized communities when it is to their financial benefit is not our only option, although I can’t blame people for thinking it is in our current market. As always, we should maintain a healthy degree of skepticism when it comes to these narratives and the corporate forces that dictate them, and we should fight for the right to tell our own stories on our own terms.

Logan Echolls Was Perfect. We Ruined Him.