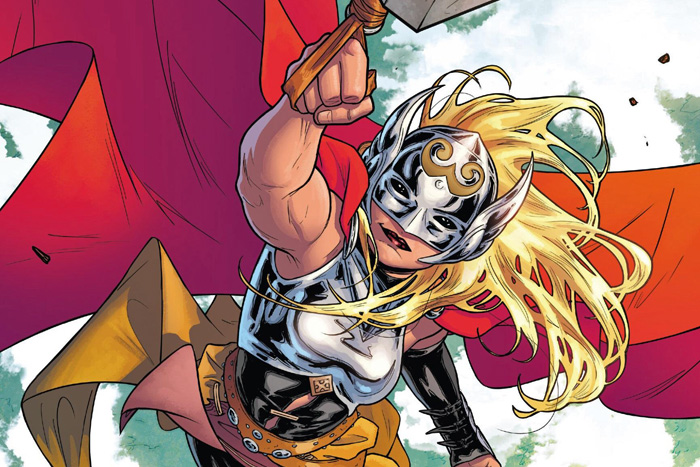 Why Is Natalie Portman the Female Thor? I'm Glad You Asked

After years of keeping its Phase 4 plans (mostly) under wraps, so audiences might somehow believe that the events of Avengers: Infinity War wouldn’t be entirely reversed by the time the Endgame credits rolled, Kevin Feige burst into Comic-Con over the weekend and started dropping bombs about the future of the Marvel Cinematic Universe.

One of the biggest announcements was Natalie Portman’s return to the Thor movies, but this time around, she’d have way more to work with than just being Jane Foster, girlfriend, while starring in Taika Waititi’s Thor: Love and Thunder. She is Thor. Well, technically, she’s The Mighty Thor, a female version of the God of Thunder that creator Jason Aaron would prefer you not call Lady Thor. That said, I’m waiting on Marvel to get back to me on “Thorgina,” which how could they not? It’s respectful and fits on lunch boxes.

Anyway, in the aftermath of the announcement, there’s been a surprising amount of confusion and frustration over Portman’s new superhero status even here on Pajiba, which I could’ve sworn was read by huge, giant dorks like myself who know how movies work. So hopefully I can clear things up because the answers are pretty simple if you have no life and obsess over comic book movies 24/7. (Tell me more of this orange orb in the sky. What does it feel like?)

Jane Foster Is the Mighty Thor in the Comics

In 2014, Marvel introduced a new female Thor, and to the surprise of no one, the reactions back then were pretty similar to how they are today: “Globalists are destroying white fictional men! Let’s become online terrorists!” (The internet was a mistake.) After months of hiding this new Thor’s identity, writer Jason Aaron eventually revealed that it’s Jane Foster wielding the hammer, and the character became a fan-favorite who went on some pretty dope adventures that I highly recommend scoping out. Or you can read the eight million explainers popping up that are just giving away the whole story. You do you.

Basically, the MCU is simply adhering to the source material character-wise even though the events of Thor 4 will obviously be crazy different. Also, sticking to the comics explains why Tessa Thompson’s Valkyrie isn’t the new Thor. At least yet. Who the hell knows what Waititi will do?

Back in April, when I correctly guessed that Portman would be the female Thor along with some other eerily accurate predictions for the MCU — Kneel before your Psychic Jesus! — I detailed Portman’s experience with Thor: The Dark World, which could best be described as some bullsh*t.

For a little background, the first two phases of the MCU were consistently kneecapped by Marvel CEO and current Trump-stooge Ike Perlmutter, who wasn’t exactly a champion for women or diversity in general. However, thanks to coming off of an Oscar win for Black Swan, Portman was able to talk Marvel into hiring Patty Jenkins to direct Thor 2 only to watch Jenkins get mansplained right out the door along with her version of the film that would not have Portman playing an Infinity Stone-infected damsel-in-distress.

Just so we’re clear, this decision resulted in Marvel getting shafted with one of its absolute worst sequels while Jenkins went over to Warner Bros. and delivered a little movie called Wonder Woman. Whoops. So it really wasn’t that surprising when Portman stopped being shy that she’s done with Marvel, and her character was reduced to a brief line of exposition in Thor: Ragnarok.

In a nutshell, Portman made one of the first prominent moves to bring an award-winning female director into the MCU only to watch a bunch of dudes replace her with some guy who made a handful of Game of Thrones episodes. And it shows. What’s depressing is that Portman gets an unusual amount of hate for her work in Dark World when it’s visible from the very moment Chris Hemsworth appears on-screen that he doesn’t want to be there. He’s even said on the record that he was bored with the character, and Chris Eccleston who played the villain Malekith has been very vocal about hating the film. There’s a reason The Dark World is considered the low point of the MCU. But if you go back and watch it, everyone in it is fine. They’re actors working with the material they’ve been given, and with the exception of Tom Hiddleston who just naturally exudes charm, there’s only so much you can polish a turd.

Which is why it was a classy move for Kevin Feige to reach out to Portman and give her the opportunity to be a part of something remarkably different after she got dashed on the rocks of the Perlmutter era, which Feige fought to end so the MCU could become the diverse smorgasbord it just displayed at Comic-Con. And yet on this feminist hugbox of a site, I watched people complain that Portman is being “rewarded” for her poor performance in Dark World as if framing things as a participation trophy suddenly stopped being right-wing horsesh*t that we should be better than. Marvel came to her, and she could’ve easily said no. Instead, she had one conversation with Taika Waititi, and that was all it took for her to jump back in. Clearly, this was a different Marvel than the one she dealt with before.

Maybe I’m missing a palpable reason to hate Natalie Portman, but I can’t see anything about this casting that isn’t a positive step forward. A female Thor in a Marvel movie about an openly bi-sexual Valkyrie looking for a queen to rule Asgard beside her? You can literally taste the conservative aneurysms. I’ll be watching this movie with my tongue out even though that usher was very clear that the next time would be my last time. DON’T TREAD ON ME, COLTON.