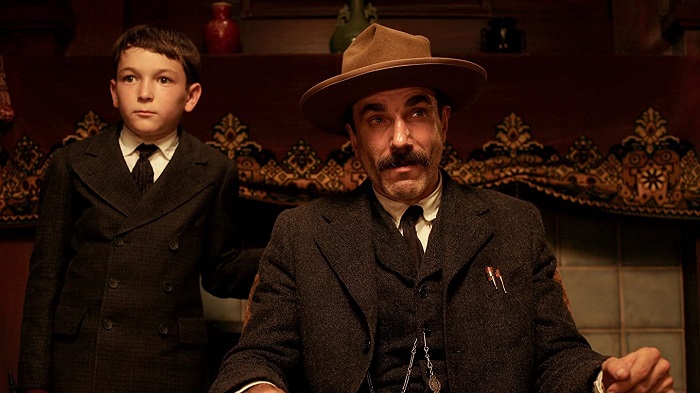 That ‘There Will Be Blood’ Piece Blowing Up Film Twitter is Wrong, and It’s Because Making ‘Film Bros’ Monolithic is a Bad Argument!

The thing about being a film critic and pop culture writer in our current environment is that it’s rough. Outlets are laying off writers or placing them on indeterminate furlough; theaters everywhere are closed, unless you are at the mercy of Georgia’s dumb governor; and movie schedules have been entirely rearranged, so most of what were expected to be this year’s biggest movies are now assumed to be next year’s biggest movies. (Or, if they were never expected to be blockbusters in the first place, they’re ending up on streaming services, like My Spy on Amazon and The Lovebirds on Netflix.)

And so, we’re all looking for content, which leads to series like this: The Guardian recently launched a new recurring feature in which film writers admit a well-regarded or well-respected or somehow influential movie that they haven’t seen, finally see it, and then write about it. Perhaps you saw that the Oscar-winning There Will Be Blood, Paul Thomas Anderson’s 2007 loose adaptation of Upton Sinclair’s novel Oil!, was trending on Twitter today. That’s because the piece that almost broke Film Twitter was this one. 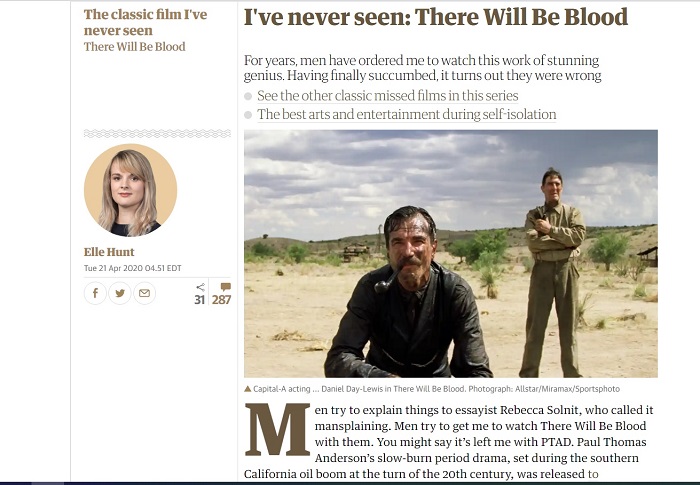 I would give There Will Be Blood a 6/10. But having finally seen it, I wonder what had led so many men to think I would like it. Then I realised that was the wrong question: they weren’t thinking about what I might like at all. The answer was obvious from the film.

Watching it, I’d been struck by the absence of women. The first we hear from a woman is when little Mary Sunday asks - I am not making this up - “What are the men doing over there?” The film shows more curiosity in the inner workings of pit mines.

I’m not saying that I only enjoy films about women, or that There Will Be Blood (or the men who tried to get me to watch it) is explicitly sexist. It is more that it’s uninterested, in a way that reminds me of bad dates where I’ve timed how long it takes for me to be asked a question. (Current record: 45 minutes, or about as long as it takes Plainview to get out of that hole.)

You could also just not watch the movie the man(?) makes(?) you watch and not write anything about it, if you want

But let me elaborate! Does this piece remind you of anything else? Maybe that clickbait piece Jezebel ran, about how Alanis Morissette’s Jagged Little Pill is actually bad? Or that viral tweet that claimed that Martin Scorsese only makes gangster pictures, although my man has as varied a career as nearly any director working today? (Watch Hugo or The Age of Innocence or any of his world cinema collections and get back to me.) Every few months or so, we get another one of these pieces that sets Twitter ablaze, inspires a bunch of angry reactions, and then eventually is forgotten in the next day or so, until another Bad Take arrives. It’s cynical, sure, but that’s how the business works. We need clicks to have jobs. Ad rates are in the dumps. Did you see that the price of oil was in the negative yesterday? Daniel Plainview would not be pleased!

What struck me most in reading this opinion, though, was a sort of sadness—because There Will Be Blood is one of my absolute favorite movies, and is up there with Killing Them Softly and the second season of Fargo and Syriana as a piece of pop culture that absolutely gets American greed and capitalism and exceptionalism exactly right. And I was bummed to read a take that already had seemed to make up its mind before the author even engaged with the film to begin with. Sorry the guys you dated were jerks? But that’s a separate issue from the quality of the movie at hand! And I get it: Film bros can ruin things. They can be exhausting! Here, a short list of all the movies they have claimed for themselves and post about incessantly and praise constantly:

But at the same time, fuck that shit. If the author of this piece legitimately didn’t like There Will Be Blood, I get it. However, the entire piece is written in bad faith, and I’m amazed by some of the statements made here—like the claim that the movie only “superficially” engages with Paul Dano’s Eli and Dillon Freasier’s H. W., as if those characters aren’t explicit manifestations of faith and family that Daniel Day-Lewis’s Daniel Plainview grapples with, and ultimately, to extreme emotional impact, rejects. The column reads less as a focused criticism of the actual movie and more of an attempted dunk on film bros and a rebuke of the bad men she’s dated, but look, not everyone who likes There Will Be Blood is a film bro. Exhibit A: Me! I love all the movies I listed above (OK, except for Uncut Gems), and sure, they’ve all been co-opted by a certain niche group of a certain niche profession.

But to then feed into the image of film bros as the only people who like these movies is doing a disservice to other fans, too, and again is just perpetuating a limiting, exclusionary cycle. It’s almost like presenting any group as a monolithic series of “bros” erases the women and the POC and the WOC who like those things and support them and agree with their ideas. Huh. Isn’t that weird?

All of this is to say: Don’t watch any movies you don’t want to watch! But DO watch any movies you DO want to watch! Don’t let men tell you what to do! But also don’t pretend that only men like movies you, as a woman, dislike! There’s a whiff here of performative feminism, like certain movies are only for men and certain movies are only for women, which makes me extremely tired. The argument makes me think that what, someone could question my femininity and womanhood because I happen to like the same movies the film bros do? Come on, man. Excuse my naivete, but movies are for everyone. I’m pretty sure my close friend Marty Scorsese said that, and no matter how hard the film bros or the bad-take artists try, they cannot take Marty from me. Nor can they take There Will Be Blood—that movie is dope. 🤷🤷🤷

← Meghan McCain Loves The Trump Ad Attacking Nancy Pelosi, As Most Smug Idiots Do | The #HollywoodAtHomeChallenge Is Allowing Bored People To Share Their Creativity By Recreating Iconic Images →