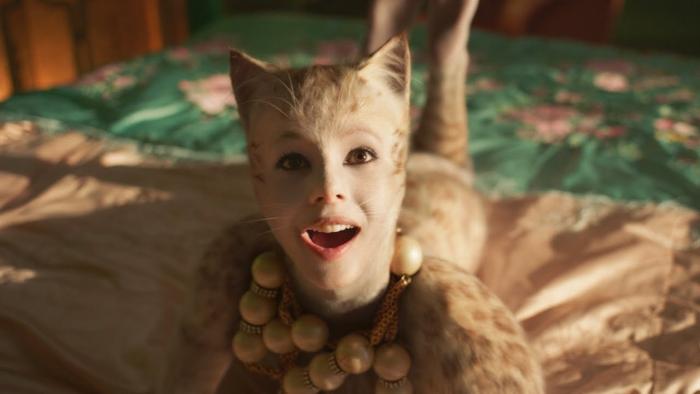 Why Do They Look Like That?! We Have To Talk About The Terrible VFX of ‘Cats’

Did you see Cats this weekend? Did you suffer through the madness? Did you brave the harsh Winter cold and venture to your nearest theater, alcohol in hand, to experience the hallucinogenic madness for yourself? There’s nothing I can say here that hasn’t been said better and far funnier in basically every review of the movie that dropped in the past seven days. Ty Burr of The Boston Globe put it best when he said, ‘Oh god, my eyes.’ It’s a wholly unique viewing experience that manages to be simultaneously horrifying and dull, one of staggering ineptitude and tone-deaf creative choices across the board. One day, there will be an amazing oral history on the making of Cats publishing in Vanity Fair once everyone involved is suitably distanced from this trash-fire. For now, all we can do is continue to ask questions.

I could be here all damn week listing the elements of Cats that either baffled or aggravated me. How does a film this calamitous have the gall to be so boring? There are so many moments that made no sense or utterly impeded any attempts to make this story cohesive or palatable for audiences. That was always going to be a tough task given the inherent weirdness of the source material but director Tom Hooper and company seem to have pulled off the impossible by committing to nothing but bad choices across the board, from casting to cinematography and editing to the adaptation process itself. Of course, we only have time to take on one issue at any given moment, so let us focus on the most evidently ridiculous and irredeemably awful aspect of Cats: The special effects. Oh my giddy aunt, what the hell happened here?!

From the moment we saw the first Cats trailer all the way back in August, we knew we were in for something astoundingly bad. Everything looked awful in ways that defied conventional thinking. We know what ropey VFX in blockbuster movies look like and it bears zero resemblance to whatever Tom Hooper and Andrew Lloyd Webber were offering us. The much-vaunted ‘digital fur technology’ looked unfinished, more like Playstation One era graphics than anything in 2019. As much as audiences grumbled about the uncanny valley nature of the photorealistic animals in The Lion King, at least that movie had a better claim to verisimilitude than anything in Cats. Everyone’s bodies looked utterly out of proportion, especially when compared to the set that seemed to change size with every scene. Actors’ faces seemed to float independently from their heads, which seldom synced up with their bodies. Aside from the ears and occasional glimpses of whiskers (another element that seemed to come and go as it pleased), nothing about the actors’ expressions seemed especially feline.

Somehow, with all the money and technological advances made since the musical premiered in the West End in 1981, the original stage show’s make-up and leg-warmer heavy costumes seemed more immersive and expressive than anything that CGI could do. And that doesn’t even include the madness of their strange agender bodies (but still with breast-like mounds so audiences can remember which cats are female) or the unsettling sight of human hands and feet on fuzzy bodies trying to go en pointe like ballet dancers. Hooper bragged at the movie’s premiere that he had finished working on the VFX mere hours before sending it to be unveiled to audiences. Now, in a move that is unprecedented, Universal is sending theaters another version of Cats with ‘improved’ effects. Yes, they are sending out a patch of a movie.

Universal are no strangers to high-concept blockbusters. This is the company behind Jurassic Park and the Fast and Furious saga. They, like every other major studio, treasure their long-term cinematic investments, often to varying results. As mediocre a director as Tom Hooper is, he’s still an Oscar-winner who previously directed a commercially successful and deeply ambitious musical for Universal, so it felt like they were making sensible decisions, even if the source material constantly opposed the very concept of common sense. How did it all go so catastrophically wrong, all puns intended?

It would be wrong to say that this film is aiming for ‘realism’ because such a concept would be inherently impossible when adapting a musical where street cats do ballet and sing T.S. Eliot poems set to synth music. The show on the stage demands the audience’s imagination but doesn’t expect anyone to buy that they’re real cats. Through costuming and make-up, the illusion is built in a way that is distinctive but leaves room for audiences to fill in their own gaps of creativity. With fewer resources at hand, the original show’s team had to get inventive, all while ensuring that the actors had the ability to dance without hindrance and stand out as individual characters amidst a crowded ensemble. Even for those of us who think Cats as a whole is bad, the original musical at least made decisions that could be understood, something that’s horrifyingly absent from the movie.

Hooper isn’t a director who has worked extensively with VFX and it shows in Cats. One of the reasons Hooper aggravates so many film lovers — aside from him winning an Oscar over David Fincher — is that he makes ambitious and creative choices for almost exclusively wrongheaded reasons. This is the man who wanted to take one of the most epic mega-musicals of the 1980s, a story of revolution and grandiosity and shoot it almost entirely in Dutch-angle close-ups of people’s faces. Some of the great numbers in musical theater history were reduced to pitchy warbling because of Hooper’s decision to record all the singing live, a choice that made life hell for the movie’s sound team. Attempting to bring realism to Les Misérables made sense in an abstract way but in practice it only highlighted how much disdain Hooper had for musicals at large, deeming the medium beneath ‘true cinema’ unless it was executed with the specific film-making tools of that mindset.

Cats faces similarly broken perceptions on Hooper’s behalf. He seems to think either that modern audiences demand realism through VFX or that this film must keep apace with the current glut of effects-heavy blockbusters lest it looks out of place or behind the times. However, this is still a musical and one that comes with cultural baggage and specific studio requirements. It needs big stars to get butts into seats but their faces can’t be hidden under mountains of make-up or motion-capture that renders them unrecognizable. So they must be cats but not cats. That means that their faces are left essentially untouched by the magic of ‘digital fur technology.’ It’s painfully clear where the border stops between the actor’s faces and the rest of their heads. You can almost see the lines on some poor feline-folk. To make matters worse, there are moments where it’s also obvious where actors’ real ears have been smoothed over. Many of the dancers’ feet seem to have been untouched by CGI to the point where I swear you can see where their shoes are. Twitter rumors abound that Hooper did not use markers on his motion-capture, although on-set reports and images refute that. That news, however, only makes the failures more inexplicable.

I had a conversation a few months ago about Cats where someone said that they were glad to see the film and Hooper taking real risks. The thing is that I’m not sure they did. Honestly, every decision the film makes, even the barmiest ones, are bizarrely safe. There’s no real creativity to the SFX. Rather, it’s a surprisingly conventional approach to the concept, from refusing to fully obscure the actors’ faces to chickening out and letting them keep their human hands and feet. Sure, it’s nightmare fuel but it’s also depressingly uncommitted to its own agenda. That’s Tom Hooper in a nutshell: he consistently makes strange choices with the most boring execution. You can see this in the effects but also in the drab cinematography which saps this weirdly proportioned London of any vibrancy save for the occasional splash of neon. It allows for no imagination, unlike the stage show, and is needlessly literal in every sense. In one musical number, the lyrics ‘familiar with candle, with book and with bell’ are illustrated with… a candle, a book, and a bell. There’s no risk in a storytelling approach this condescending.

The knock-on effect of these bad effects can be found everywhere. The acting is mostly fine but with notably terrible moments. Poor Jennifer Hudson has clearly been told to overcompensate for any motion-capture cover of her face by emoting for the cheap seats. I’ve no idea if the choreography for this film is any good because the editing is all over the place, clearly trying to distract from how f**king weird everyone looks. Said editing is dizzying but not in the satisfying or breathlessly energetic manner of a Baz Luhrmann musical. It’s just sloppy. Even basic movements look weightless like a Final Fantasy VII cut-scene because the effects are clearly not finished.

That’s not an exaggeration either. This film is not finished. Tom Hooper admitted they rushed out a trailer, then rushed the film to meet the cut-off date for Golden Globes qualifications after originally claiming they would not meet it (the film was snubbed in all major categories.) He sent it out to its world premiere then bragged about having only finished effects that morning, and now he’s sending out a new cut of the film with ‘better’ CGI. In fairness, I’m not sure a movie like this could ever be ‘finished’ in the conventional sense, but there’s something so wilfully cavalier about this approach from Hooper and Universal that is mind-boggling in ways even the movie isn’t.

In the end, the thing that truly sinks Cats is the thing that its special effects fully exemplify: That everyone involved with this endeavor took it WAY too seriously. There’s no fun to this show and no recognition of its primal camp nature. Nobody looks like they’re having any fun with the material and Hooper clearly views it through such a portentous gaze that any possibility of vibrancy or even a more self-aware strangeness is stifled. This was a film that was treated with utmost gravitas while being rushed out to meet awards deadlines. The poor, underpaid SFX workers contracted to work on this most likely did not have the time, the funds, or the directorial guidance to make this anything other than a half-polished turd. To make matters worse, now the film has a new version to compensate for the mess and the chances are those effects teams will be even more overworked as a result. At least the makers of Sonic the Hedgehog had the decency to pull the film before release to fix it rather than making viewers pay first.

I hope that Cats goes down not only as a legendary cinematic trainwreck but as a hard-earned lesson in what not to do with effects and storytelling. The chances are that Tom Hooper will be fine and will continue to spread his stink across unsuspecting source material. It didn’t have to be this way. Someone had to say stop but they didn’t and so here we are with all these memories.