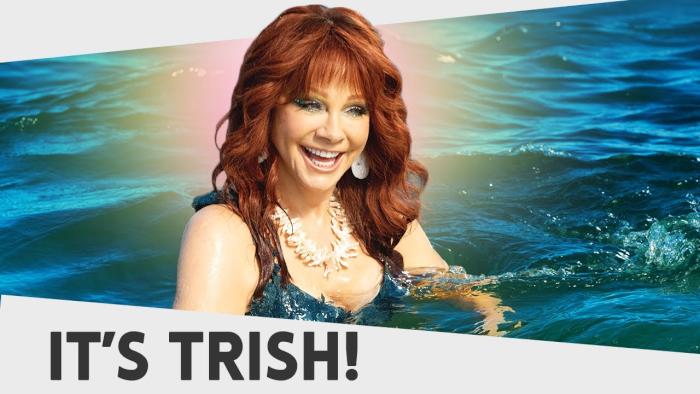 Who Is Trish? Reba McEntire Unravels This 'Barb And Star Go To Vista Del Mar' Mystery

Trish! If you’ve enjoyed the deeply delirious delights of Annie Mumolo and Kristen Wiig’s superb buddy-comedy Barb and Star Go to Vista Del Mar, the name “Trish” now holds a special place in your heart forevermore. If you haven’t, nothing that follows will make a lick of sense.

Spoilers below for Barb and Star Go to Vista Del Mar.

Reba McEntire pops up in this kooky comedy as Trish, a deus ex machina with a mega-watt smile. A collaborative rant between Barb and Star in the second act introduces the idea of Trish. However, if you’re still scratching your head about her whole deal, the beloved country icon who plays her is here to explain.

Okay, “sea ghost” is my new career goal. But McEntire’s not done describing all that is Trish. “I play Star and Barb’s imaginary—I think—a hero friend?” She ponders, “Somebody named Trish that they really want to be great friends with. They’ve got this imaginary friend that is Trish. And that’s who I become.”

“It was one of those types of parts, where you go, ‘Really?’” McEntire considers. “A sea ghost. Okay.”

Then she muses, “I think a sea ghost or a sea spirit is sort of like a mermaid. And I don’t know why we’re not calling it a mermaid. Except I don’t get to wear the bottom part of a mermaid outfit. You never see it. But I am a WATER SPIRIT.” She nods. “I don’t know what the difference is.”

The clip also features a starstruck Wiig marveling over one of the greatest celebrity cameos in comedy. But let’s circle back: McEntire signed onto this film not really understanding if she was a mermaid, imaginary friend, water spirit, or sea ghost. And she still doesn’t. And it doesn’t matter, because she was perfection. She was a treasure. She is Trish.

Barb and Star Go To Vista Del Mar is available for PVOD. Take it from me and Jason, it’s worth the $20 fee! (Especially if you watch it three times in 24 hours, which I heartily recommend.)


← Watch: The Original 'Real World' Cast is Back, But What's Up with Eric Nies? | 'WandaVision' Finally Toys With the 'Is Wanda a Mutant?' Question →