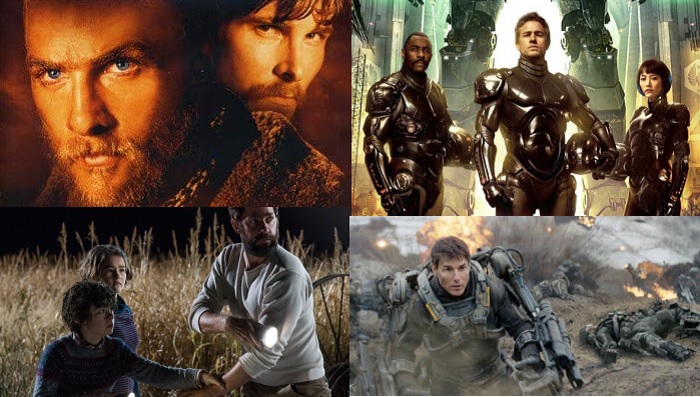 ‘Edge of Tomorrow,’ ‘Pacific Rim,’ ‘A Quiet Place,’ and ‘Reign of Fire’ All Take Place in 2020, and Yes, I'd Entertain Living There Instead

The year is 2020. Human civilization is on the brink of collapse. Our leaders have failed us. Our society has crumbled. Pockets of resistance pop up to fight against the destruction of our way of life. Ingenuity and compassion are pushed to the brink. Shit is bleak, and who knows if we’ll survive.

Isn’t it funny how that preceding description could apply to our current circumstances (worldwide pandemic, ineffectual leader on the presidential level, cowards on the state level, food shortages, housing insecurity, rampant unemployment, etc. etc. etc.) or to a number of different sci-fi/action movies that are all set in 2020? Much was made last year of the original Blade Runner being set in 2019, and I’m sure back in 1984, people wondered about the overlaps between that year and George Orwell’s seminal dystopian text. And here we are in 2020, the year in which our world was (cinematically) caught in a war with fantastical creatures (Reign of Fire) or malevolent aliens (Edge of Tomorrow, A Quiet Place) or both (Pacific Rim). We are very besieged!

I am assuming screenwriters were charmed by the repetitive nature of the number 2020, and there’s certainly a nice roundness to it. It’s just fun to say! Twenty-twenty. What a lovely year for the entire world to go to shit!

Still, let me admit: When I think about Reign of Fire, Edge of Tomorrow, A Quiet Place, and Pacific Rim, every one of the realities created in those movies has its own appeal. So! Let us consider: Which set-in-2020 action movie would I rather be in than our current reality? THIS IS A SERIOUS QUESTION THAT DEMANDS SERIOUS ANSWERS.

Guillermo del Toro’s creature feature, set during 2020, when an interdimensional portal allows gigantic kaiju (named for the Japanese genre of giant monster films, translated from Japanese as “strange beast”) to travel to Earth and wreak havoc, is probably my first choice. Primarily because the kaiju seem to attack coastal cities first, and so in that way, I feel sort of safe! I live outside Baltimore, and yes, we’re near water, but it’s not like we’re the California coast or something! Selfishly, that is my first reason, because I don’t know how much danger I’d actually be in. Maybe life could go on as normal! Second of all, the kaiju pilots are celebrities, and I’m sorry, I still can’t get over how hot Charlie Hunnam is in this movie. I’M SORRY. Guillermo understands the female gaze, and he gives it to us! So if Hunnam’s Raleigh Becket is still a celebrity for his role as a Jaeger pilot, then maybe he’s on the news a lot, and I can ogle. If the world is ending, I want to ogle. And finally there’s the fact that humans all got together and figured out how to build the Jaegers, and there was international cooperation to get it done, and that reassures me. The idea that people from all over the world could still share knowledge and expertise and resources feels soothingly humane right now, and I want that.

Plus, Idris Elba’s delivery of “We are canceling the apocalypse!” might be the best moment ever committed to film. I’m not trying to exaggerate, but I think I’m right. SO YES: I could live in Pacific Rim.

You might recall Edge of Tomorrow as one of the first movies in recent history to do that thing where it basically renamed itself after initial release. Before Birds of Prey was renamed Harley Quinn, Edge of Tomorrow was renamed Live Die Repeat, the recurring theme of Tom Cruise’s experience throughout the film. After aliens called “Mimics” arrive on Earth in 2015, basically taking over Europe, worldwide forces join together into the United Defense Force. In a narrative that sort of reminded me, very broadly, of Starship Troopers, five years later in 2020 the UDF is fighting on the ground against the Mimics in France, the UK, and Germany, and we follow their efforts through two characters: Tom Cruise’s Major William Cage, a comms guy who is unexpectedly thrust into combat, and Emily Blunt’s war hero Sgt. Rita Vrataski. After coming into contact with Mimic blood as he dies, Cage is stuck in a time loop, during which he connects with Vrataski and they figure out how to battle the Mimics—who are, I must remind you, mostly contained within Europe! So are they really going to bother me in Maryland? Doubtful! But at the same time, I am fairly close to Washington, D.C., and I’m sure any sort of military effort would be super supported by American efforts and American media, so that might get sort of tiring after a while! Endless war seems fairly exhausting! We already live in a highly militarized society! Could I handle more of that? Doubtful! However, Sgt. Vrataski is a war hero, and Blunt is pretty attractive in this movie! Maybe I could handle all the military worship because a lot of it is about her! It’s possible! But ultimately, I’mma pass: NO, I could not live in Edge of Tomorrow.

We talked about Blunt already, so let’s talk about her again in the context of A Quiet Place, as the matriarch of a family struggling to survive after sound-triggered aliens invade Earth in 2020. Blunt is very good here! So nurturing and lovely and caring toward her children! The Abbotts are just trying to survive, and their life on the family farm seem extensively planned and considered to ensure that everyone stays healthy and safe after they lose a son early in the film. It’s all very admirable! But I must repeat a question that has come up a lot after the film’s release, and is a legitimate one: What about body noises within the Quiet Place universe? Are gassy people just like, immediately murdered? What if you happen to belch? Or get hiccups? I have epilepsy and sometimes I have these little mini-seizures that cause me to catch my breath sort of loudly while shaking. WOULD I DIE BECAUSE OF THAT?

I’m sorry, I know A Quiet Place 2 includes the very hot, very bearded Cillian Murphy, but I cannot chance a pre-existing medical condition being the cause of my demise! Nope! VERY VEHEMENTLY NO, I could not live in A Quiet Place.

Reign of Fire is excellent and ludicrous, a film I treasure deeply and am sad is no longer on TV very much anymore, and truly the kind of B-movie that cast member Gerard Butler is still making but that co-leads Christian Bale and Matthew McConaughey no longer touch. Alas, for they added just the right amount of capital-M Masculinity to this action movie that posits it was dragons who killed the dinosaurs and have now awoken from their lengthy slumber to kill humans, too. By 2020, the world in Reign of Fire is a smoldering ruins, people are starving, and their only hope for survival is to find the world’s sole male dragon and kill it, so it can stop breeding and producing offspring. Look, logistically, I know I would probably die in Reign of Fire very quickly. My cardio sucks. I don’t have any sort of expertise with a weapon, and definitely couldn’t shoot at dragons, as McConaughey’s and Bale’s characters do. But just on a pure aesthetic level … living in a Reign of Fire reality would be metal as fuck! It’s like a ’90s Nine Inch Nails video, all the time! Dragons are REAL??? We’re not all AMAZED by this??? I would be amazed by this. I would absolutely end up as a dragon’s toothpick, probably immediately, but at least I could revel in all my Goth kid dreams come to pass, if only briefly. GLEEFULLY BUT WITH THE AWARENESS OF MY OWN DEMISE, yes, I would choose Reign of Fire.

Could you tolerate any of these alternate versions of 2020? Sure, things would be worse, but at least we’d have mythical creatures and shit. Honestly, I might prefer it.