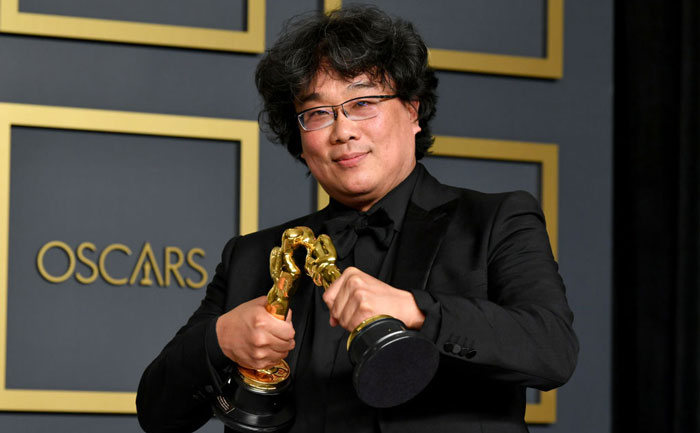 Last night, cinephiles around the world rejoiced as Bong Joon Ho defied the odds (as well as years of systemic racism and American Exceptionalism) to take home not one, not two, not three, but FOUR Academy Awards for his masterpiece, Parasite. This rapturous moment and all the fanfare that follows will introduce the acclaimed South Korean writer/director to a whole new world of fans who will want to know what the rest of us are so excited about. It will also entice those who love his movies to revisit them or conquer our blindspots in his fantastic filmography. To help in your quest of seeking out the exceptional movies of Bong, we’ve found where you can stream every one of his feature films.


Parasite (2019)
You can watch the winner of Best International Feature Film, Best Original Screenplay, Best Achievement in Directing, and Best Motion Picture of the Year right now! If you still don’t know what Parasite is about, take all the accolades as proof enough to give it a shot and go in blind. If you absolutely must know something: the dark comedy follows an impoverished family as they hustle to get a piece of the good life. Now go! See the movie that’s been driving Film Twitter mad with excitement since its Cannes premiere! Song Kang-ho, Choi Woo-shik, Park So-dam, and Jang Hye-jin star.
Watch on Amazon.
Okja (2017)
Bong’s collaboration with Netflix is a fantastical tale of a young girl and her genetically modified giant pig named Okja. When an eccentric exec (SWINTON) captures this incredible creature, it’s up to young Mija (Ahn Seo-hyun) to save her beloved pet and best friend, which will throw her in the way of an overzealous animal rights group and a past-his-prime TV host (think Stever Irwin meets Pee Wee Herman). Steven Yeun, Lily Collins, Paul Dano, and Jake Gyllenhaal co-star.
Watch on Netflix.
Snowpiercer (2013)
Ahead of the premiere of its TV reboot, see the dystopian thriller that had audiences at the edge of their seats! In a frigid future where the earth is covered in ice and snow, the last humans live on a long train, segmented by a cruel class system. While the rich enjoy dance clubs, perky classrooms, and fresh sushi, the poor are left in the back, a dark, dank place where the lack of food can lead to horrendous choices. The time for revolt has arrived as one man (Chris Evans) leads a motley crew through a battle-filled mission to the front. Song Kang Ho, Ed Harris, John Hurt, SWINTON, Jamie Bell, Octavia Spencer, Go Ah-sung (credited as Ko Asung), and Alison Pill star.
Watch on Netflix.
Mother (2009)
This critically heralded and rawly riveting murder mystery centers on an unnamed widow (Kim Hye-ja) who lives a simple but happy life with her intellectually disabled teen son (Won Bin). That is until he is arrested for killing a local girl in a bizarre case. Desperate to clear his name and save him, this mother sets out to find the true killer. Be warned: you will never forget the final scene, and not for the reason you might predict. Jin Goo, Moon Hee-ra, and Yoon Je-moon co-star.
Watch on Amazon.
Tokyo! (2008)
Bong teamed with Leos Carax and Michel Gondry for this trypich of tales. Each wildly original director helms one vignette. So all you can predict is that this omnibus will blow your mind with its stories of festering relationships, a vulgar vagabond, and a curious shut-in. Teruyuki Kagawa, Yū Aoi, and Naoto Takenaka star in Bong’s “Shaking Tokyo.”
Watch on Amazon.
The Host (2006)
For many Americans, this thrilling and surprising creature feature was their introduction to Bong. Its story centers on a quirky family torn apart by a mysterious monster that emerges from Seoul’s Han River and snatches their youngest daughter. As the authorities try to make sense of this beast, this family’s concern is getting her back, whatever it takes. Song Kang-ho, Byun Hee-bong, Park Hae-il, Bae Doo-na, and Go Ah-sung star.
Watch Amazon.
Memories of Murder (2003)
Set in a small province of South Korea in 1986, this crime-thriller follows two detectives as they seek to find a serial rapist/murderer. It sounds bleak, but Bong awed critics by folding in unexpected moods, a talent that would become his brand. Fun fact: this was the first of Bong’s directorial efforts to star recurring collaborator and long-time friend Song Kang-ho, who would go on to appear in Snowpiercer, Okja, and Parasite.
Watch on Popcorn Flix.
Barking Dogs Never Bite (2000)
Here’s where it all began! Bong’s directorial feature debut was a dark comedy about a man driven mad by a neighbor’s relentlessly barking dog. He’s not even the most ferocious foe to man’s best friend in this film. So, this one is not for the faint of heart. (You can get a feel for it in the above clip.) However, for a great sense of Bong’s unique brand of humor, which blends deeply dark content with a vibrant goofiness and captivating characters, Barking Dogs Never Bite is a must-see.
Watch on Amazon.

← A Collection of Random, Hot, and Adorable Photos from the Vanity Fair Oscar Party | What Was Bradley Cooper Doing at the Oscars Anyway? →