Whoa! What the Hell, Kevin James?

If you’re into brutal films in which Vince Vaughn plays a skinhead who scrapes the flesh off a dude’s skull, there’s a movie called Brawl in Cell Block 99 that you would love (and when you do, you may as well watch writer/director S. Craig Zahler’s other films, Bone Tomahawk and Dragged Across Concrete and just hate yourself for being so compelled by Zahler’s nihilistic viewpoint).

That role in Brawl in Cell Block 99 didn’t exactly improve Vince Vaughn’s career, box-office wise, but it did change it, so much so that this week, he’s starring as a deadly drug dealer in a Southern noir called Arkansas (review up tomorrow). At the very least, Vaughn is a more interesting actor than he has been in years, and all it took was playing a skinhead. 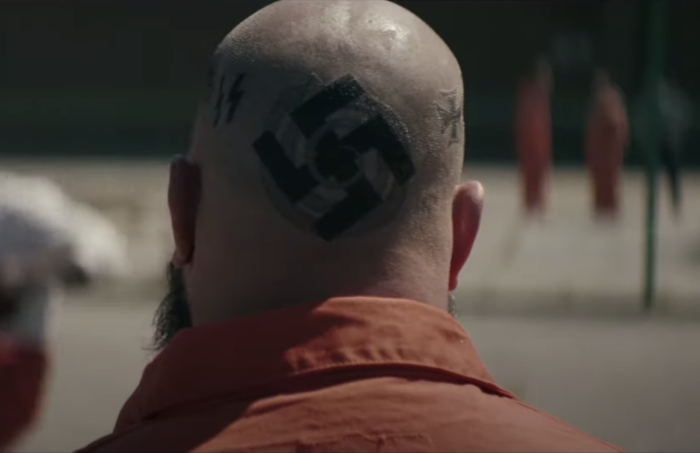 That is the back of Kevin James’ head in the trailer for Becky, from directors Jonathan Milott and Cary Murnion. The last time we saw Kevin James was in his CBS sitcom, Kevin Can Wait, where he returned after making a decade of terrible comedies like Paul Blart, Here Comes the Boom and The Dilemma (with Vince Vaughn). This is quite the departure for James.

I’m not saying that Becky will be good, but I am saying that it looks interesting. After realizing that the trailer would not feature a record scratch (“Kevin James IS a Nazi! *record scratch* Wait, what?!”), it’s fascinating to see Kevin James take on the role of a villainous escaped convict who wreaks havoc on the life of Becky and her family at a summer cottage. It looks like low-budget The Strangers meets Home Alone. That’s not a complaint. Joel McHale, also in a dramatic role, plays the father, while the movie also stars Lulu Wilson (The Haunting of Hill House, Sharp Objects, Ouija: Origin of Evil).


Becky comes out on VOD and digital on June 5th.