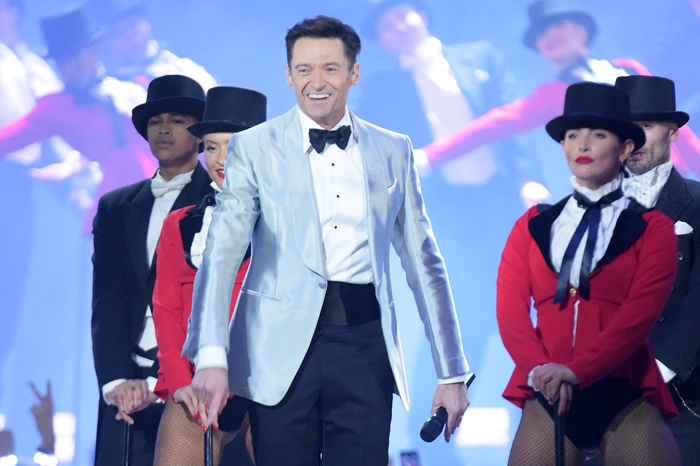 Yesterday, Hugh Jackman dropped some not-so-shocking but still intriguing news. Yes, he was asked to star in Cats. However, despite earning his first and only Academy Award nomination for his turn in Tom Hooper’s Les Misérables, the megastar of stage and screen declined a chance to reteam on Cats. Now, we’re left wondering who he might have played.

When asked by The Daily Beast if he’d been considered for the Andrew Lloyd Webber musical adaptation, Jackman said, “Umm… yep.” Pressed for what role he was offered, the Logan star demurred. “You know, Tom rang me early on because we did Les Mis together,” Jackman explained, “And there were a couple of options there based on availability and time, and I really…yeah, I just wasn’t available at the time.”

A couple of options, huh? Let’s consider what could have been if Jackman’s “schedule” had allowed.

Hugh Jackman as Munkustrap.
Played by Robbie Fairchild, Munkustrap is the gray cat that serves as a self-appointed tour guide to white kitty Victoria (Francesca Hayward) through the weird and wondrous world of Jellicle Cats. Fairchild is phenomenal in the role (just look to his reactions to Judi Dench’s entire final monologue for proof), but he’s a ballet dancer, not a movie star. Could Hooper have considered plopping his Jean Valjean into this role, which would have brought Jackman dazzle to a slew of numbers, including one where he’d essentially sing to Rebel Wilson’s taint?

Likelihood: Not strong. I can imagine Hooper throwing several cards on the table for Jackman to choose from. However, it’s hard to imagine the star would seriously consider this part. In the final film, it’s a workhorse role, which demanded plenty of shoot days and learning a lot of choreography. It must have been a major commitment for Fairchild. And yet, Munkustrap never gets a big moment all to himself. Fairchild made the most of it, becoming a sensational scene-stealer. But that doesn’t sound like a part Jackman might scratch at.

Hugh Jackman as the Magical Mr. Mistoffelees.
Played by Will’s Laurie Davidson, Mr. Mistoffelees is the sheepish cat who spends much of the movie sniffing around Victoria. A hapless clown, he becomes a Jellicle legend once his magic rescues Old Duetoromy from the clutches of McCavity. Then he basically gets the girl, kitty cuddling with Victoria in the finale.

Likelihood: Not great. It’s easy to picture Jackman going theatrical cat as Mr. Mistoffelees, chiefly because his Greatest Showman worked revealed such a playful edge. However, at 51, Jackman seems a bit old for the role of a 28-year-old ingenue’s love interest. Yet Hollywood is never bothered much when May-December favors older men. Plus, this cat does get a big third act moment. Still, it’s hard to believe Jackman would play second fiddle for so much of Cats’ runtime. 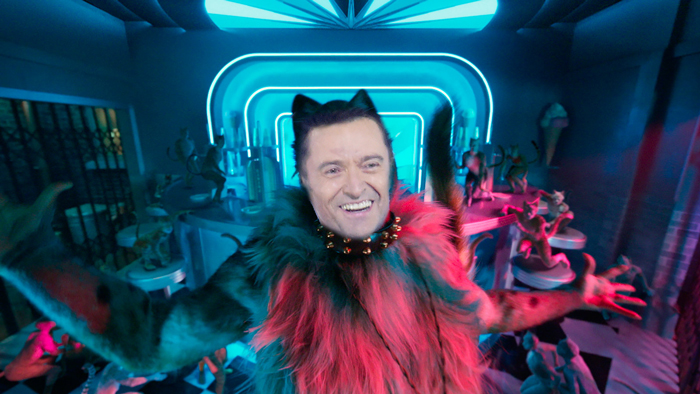 Hugh Jackman as the Rum Tum Tugger.
The Rum Tum Tugger is a curious cat, notoriously fickle but with a frenzied charisma that brings all the pussies to his paws. R&B star Jason Derulo shined in the role, bringing a brazen glee and sensuality to his big number.

Likelihood: Decent. Rum Tum Tugger’s song would have come off very differently from Jackman, but the macho charisma demanded of the part would remain. If Hooper attempted to tempt the A-lister by offering his pick of a litter of cats, I’d wager this randy showstopper was included. 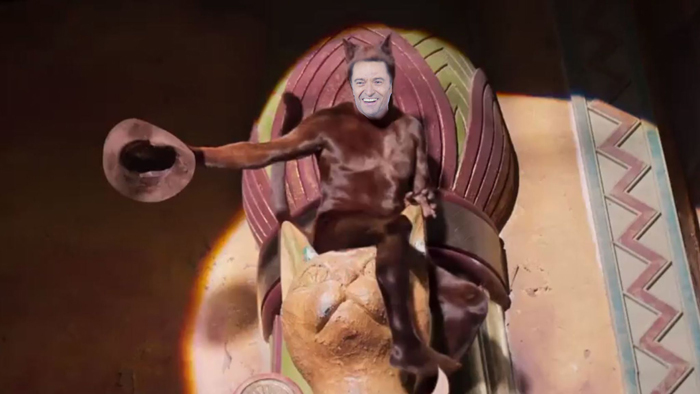 Hugh Jackman as McCavity.
Played by Idris Elba, McCavity is the movie’s antagonist, a broad-shouldered cat who lurks in the shadows, ambushes unsuspecting Jellicle cats, then inexplicably vanishes them to a barge on the Thames. It’s a role that demands swagger and sex appeal, to which Elba brought scads. However, it’s a role that doesn’t demand much in the way of actually singing, so in a sense, it’d be a waste of The Greatest Showman’s leading man.

Likelihood: Still good! McCavity has such brief appearances in Cats that it makes sense to cast a star who brings an air of machismo, sex, and mischief with him. Sure, it wouldn’t make much use of Jackman’s musical theater skills. But it likely demanded less shoot days and less cat schooling, which might appeal to his busy schedule. We’d wager this was definitely among the “couple of options.” 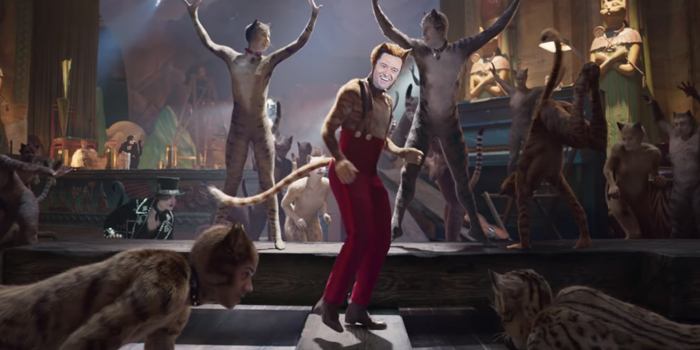 Hugh Jackman as Skimbleshanks the Railway Cat.
Skim. Ble. Shanks. The. Railway. Cat. is the CAT OF THE RAILWAY TRAIN. His big number comes late in the movie and is centered around an energetic tap-dancing number. Speculation about Jackman’s could-have-been casting points to Skimble chiefly because he’s one of the showier roles that isn’t played by a major star. While other big numbers center around the likes of Taylor Swift, James Corden, Ian McKellen, and Jennifer Hudson, Skimbleshanks was played by Steven McRae, an Australian dancer who is acclaimed, yet so unknown in cinema that his IMDB profile doesn’t even include a headshot.

Likelihood: Solid. Because Skimbleshanks doesn’t appear until late on the film, this would be another role that wouldn’t demand a ton of days from Jackman. But could the movie star pull off the flashy tap number? His time on “The Man. The Music. The Show. suggest yes.

Sadly, we likely won’t know for certain which roles Jackman was offered, as he is well aware of what it’d mean to share that. With Cats bombing hard at the box office, being savaged by critics, and then openly mocked at the Academy Awards, it’s become a stain on the filmographies of all of its stars. To drop the fun fact of “I was offered the role(s) of…” would be to put salt in the wound of whoever took the part, a subtle “suck it” to Elba or a “you ain’t sh*t” to McRae. On top of that, it’d be shady bragging, because Jackman—schedule or not—made a good call by turning down Cats. He’s too classy a cat for all that.

Or as Jackman put it, “I’m in the theater, man, and I don’t want to be in the business of bashing people—or jumping on bandwagons. I haven’t seen (Cats), and Tom Hooper’s one of the great filmmakers we have.”