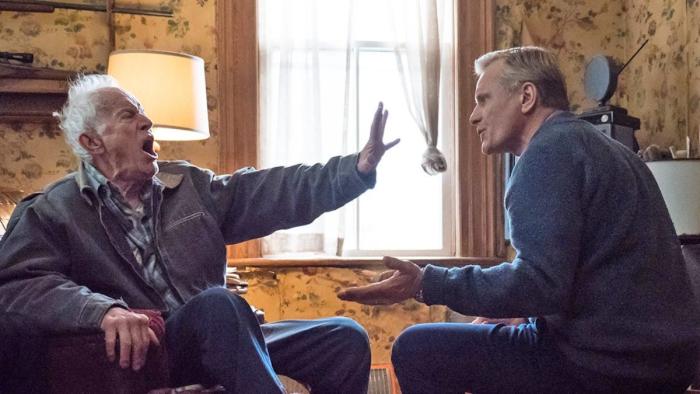 What Do We Think Of Viggo Mortensen's Defense About Playing A Gay Character?

Viggo Mortensen is coming under fire for playing a gay man in his directorial debut Falling. However, his response to this criticism calls on audiences to question their own assumptions. Does he have a point? Is this self-serving spin? Can it be both?

Written and directed by Mortensen, Falling centers on a homophobic father (Lance Henriksen) moving in with his gay son (Mortensen), who lives in Los Angeles. Cultures clash.

In her review out of TIFF, Kayleigh expressed concern that the star of Green Book could write/direct a movie that wouldn’t be “a condescending co-opting of the lives and struggles of the marginalized, mostly to use as a series of cheap punchlines for the token bigot character.” However, she assured us Falling dodges that pitfall (but it manages to be underwhelming all the same.)

As Falling begins its European rollout, Mortensen has been asked about his decision as a straight actor to play a gay character. Here’s what he told The Times (via IndieWire):

“Look, these are the times we’re living in, and I think it’s healthy that those issues are brought up. The short answer is that I didn’t think it was a problem. And people then ask me, ‘Well what about Terry Chen, who plays my husband in the film, is he a homosexual?’ And the answer is I don’t know, and I would never have the temerity to ask someone if they were, during the casting process.

And how do you know what my life is? You’re assuming that I’m completely straight. Maybe I am, maybe I’m not. And it’s frankly none of your business. I want my movie to work, and I want the character of John to be effective. So if I didn’t think it was a good idea I wouldn’t do it.”

In his comments, Morrison notes the heteronormative presumption that all performers are straight until outed. If we as a society recognize that sexuality is a spectrum, then it’s wrong to assume Timothée Chalamet, Armie Hammer, Cate Blanchett, Rooney Mara, Kate Winslet, and Saoirse Ronan are straight. Their documented relationships with the opposite sex do not exclude the possibility they are bisexual, pansexual, or somewhere else within the LGBTQA+ rainbow.

Some may well argue that it’s the duty of famous people to be out and proud as an example to the LGBTQA+ in need of visibility and role models. However, coming out is an incredibly personal and complicated thing for many. Having the whole world weighing in on it cannot make it easier. Thus, Mortensen is defending the privacy of performers by arguing that you shouldn’t have to announce your Kinsey Scale number to play a non-straight role. He’s got a point. However, he’s also employing this argument to deflect the question about whether it’s wrong for straight actors (like maybe himself?) to take non-straight roles. This could be masterfully self-serving spin, but at least he didn’t insist he should be able to play a tree.

Consider this: When a straight-assumed performer plays a gay role, they often get accolades for their perceived bravery. Chalamet was nominated for an Oscar for Call Me By Your Name. Both Heath Ledger and Jake Gyllenhaal were nominated for Brokeback Mountain. Melissa McCarthy and Richard E. Grant were nominated for Can You Ever Forgive Me? Sean Penn and Tom Hanks won Oscars for Milk and Philadelphia respectively.

These are great performances. So, some argue there’s no problem here. However, the issue isn’t strictly onscreen results but the snatching of opportunities from a community you are presumably uplifting through the performance. There’s not an identifiable trend of gay performers playing straight to Oscar acclaim. Maybe it happens on occasion, but there’s not an FYC narrative built around their bravery for such work. Beyond that, openly gay actor Rupert Everett has spoken out about how being out has blocked him from playing straight roles, which means most roles. Essentially, the film industry—intentionally or not—incentivizes staying in the closet, as non-straight performers can broaden their casting niche by maintaining a straight-passing front.

Ultimately, Mortenson makes some solid arguments that speak to the spectrum of sexual orientation and the protection of a celebrity’s personal life. While his motives are unclear, what does this mean for the evolving conversation about queer representation in film?