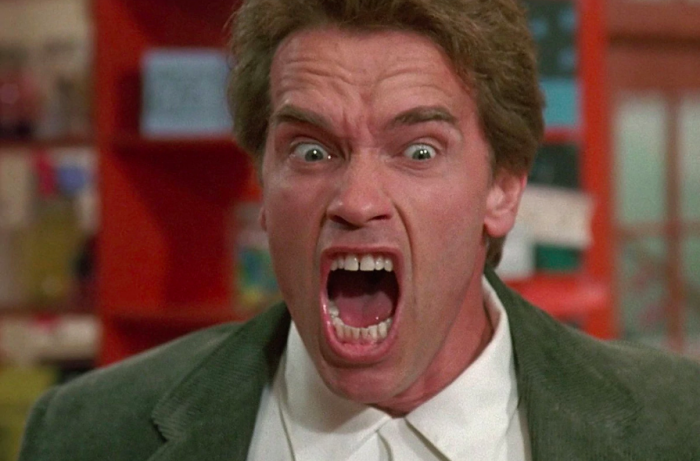 Portland, Oregon has been under siege by police brutality against Black Lives Matter protesters and abductions from Trump’s secret police force. So, some have suggested maybe now isn’t the best time to screen Kindergarten Cop for the Portland public?

The 1990 comedy, which starred Arnold Schwarzenegger as a police detective working undercover as a kindergarten teacher, was scheduled to launch Portland’s Northwest Film Center’s Cinema Unbound Drive-in Theater on August 6.

The idea was to mark Kindergarten Cop’s 30th anniversary and celebrate “its importance in Oregon filmmaking history,” as the movie was shot in Astoria, Oregon. However, considering the troubled climate between cops and civilians right now, staff and community members reconsidered the planned outdoor screening. Ultimately, they opted instead to screen Good Trouble, the recently released documentary about the late Civil Rights leader and American congressman John Lewis.

“National reckoning on overpolicing is a weird time to revive Kindergarten Cop. IRL, we are trying to end the school-to-prison pipeline. There’s nothing entertaining about the presence of police in schools, which feeds the ‘school-to-prison’ pipeline in which African American, Latinx and other kids of color are criminalized rather than educated. Five- and 6-year-olds are handcuffed and hauled off to jail routinely in this country. And this criminalizing of children increases dramatically when cops are assigned to work in schools.”

Leveen expanded on her concerns in a message to a local news outlet, explaining, “It’s true Kindergarten Cop is only a movie. So are Birth of a Nation and Gone With the Wind, but we recognize films like those are not ‘good family fun,’” she wrote. “They are relics of how pop culture feeds racist assumptions.”

She compared Kindergarten Cop to Birth of a Nation. Here we are. 😂 https://t.co/SIGlFWf1Uw

Nutty. Angry leftists hate Hollywood. Anyone who disagrees will be censored.

Hollywood, afraid of the mob, will keep funding those trying to erase any speech/movies that don’t conform. https://t.co/aZUKKaBywZ

*Kindergarten Cop' pulled from Portland theater after complaints it 'romanticizes over-policing*
Then don't go if you can't handle it! Why should the rest of us have to suffer? Another nail in the coffin of comedy. We're getting to the point where nothing will be ok to laugh at.

No, unfortunately I am not joking. WTF? pic.twitter.com/rXhrB2S1QM

It also romanticises the idea Schwarzenegger can do comedy.
Luckily it’s JUST A STUPID FILM.https://t.co/3tcm9uNsm9

😂🤣NOW the movie Kindergarten Cop is a problem??? Who are these people that are easily offended? What could possibly be wrong with this movie? DON'T ANSWER. I honestly don't care.

Should tell those that reported and got Kindergarten Cop cancelled the following: pic.twitter.com/uHZPNZBo43

Kindergarten Cop's message to SJWs. …ahead of its time. pic.twitter.com/hZbbQZXmvn

Who had Kindergarten Cop being linked to Birth Of A Nation on the 2020 bingo card? pic.twitter.com/nYPTCg2AgU

There were also a lot of transphobic jokes because of the Kindergarten Cop scene in which a small child says, “Boys have a penis. Girls have a vagina.”

I planned to include tweets from both sides of this debate. However, in a flood of slams against PC culture, SJWs, snowflakes, and trans people, I found no support of Leveen’s point. Which doesn’t mean they don’t exist. It may mean those tweets were drowned out by outrage over a local screening cancellation that won’t impact most people in any way, especially because Kindergarten Cop is easily accessible online. Yet the narrative being pushed in tweets like those above is that liberals are the ones overreacting.

Some final food for thought:

I can't remember the initial source that was talking about this, likely On The Media, but this whole Kindergarten Cop as a part of the Culture War thing is one of 10000 examples of conservative media's tactic of making local issues into "national" news to inflate non stories