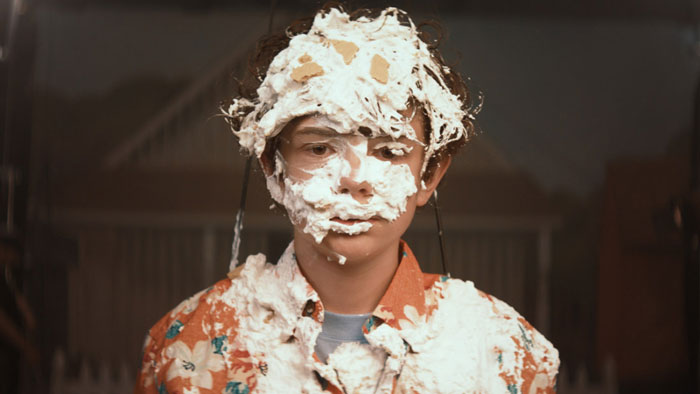 Trailer Round Up: Boys Will Be Bad And Shia LaBeouf Digs Deep

With the summer coming to a close, we’re edging into award season. That means we’re starting to see trailers drop that are hoping to be Oscar contenders. In that mix, we have Shia LaBeouf’s sort-of biopic Honey Boy and a curious adaptation of A Million Pieces. But that’s not all! We’ve also got a summer-set thriller, an intriguing political doc, and the latest from Nic Cage.

Want a grungy thriller set in a beach town? The latest from A24’s got you covered. Centered on a batch of teen thieves who rob beach houses for Boardwalk money, Low Tide turns dark when two of these boys discover real treasure, sparking vicious envy.

This documentary explores the life of journalist Molly Ivins, who is described as “six feet of Texas trouble who took on the Good Old Boy corruption wherever she found it.” She was fearless, funny, and determined to set the world on fire with her writing, once declaring Newt Gringrich “the draft-dodging, dope-smoking, deadbeat dad who divorced his dying wife.” Sounds like she’d fit in around these parts.

Running With The Devil — In theaters, ON Demand/digital September 20.

Riddle me this. This crime drama boasts Adam Goldberg, Leslie Bibb, Clifton Collins Jr., Peter Facinelli, Laurence Fishburne, Barry Pepper, and Nicolas Cage. So why does it look like such a snooze?

Shia LaBeouf cracks open his troubled childhood, penning the script for this showbiz drama about a child star and his domineering dad. Pulling double duty and digging deep, LaBeouf also co-stars as his own father, while A Quiet Place’s Noah Jupe and Manchester by the Sea’s Lucas Hedges play the titular “Honey Boy.” Plus, FKA twigs makes her film debut in this Alma Ha’rel-helmed drama, which sparked raves at Sundance.

Sam Taylor-Johnson and Aaron Taylor-Johnson reteam to bring James Frey’s best-selling—and infamous—memoir to the big screen. The husband-and-wife team adapted the screenplay together. Sam is helming while Aaron takes the lead as a drug-addled writer struggling to get through detox. Considering Sam managed to take the cheap prose and cringe-worthy plot of Fifty Shades of Grey and turn it into something watchable, we’re eager to see what she can do with a book that has some real meat to it.

← Morning Briefing: Donald Trump and the Baby, Another Joe Biden Gaffe, and Sarah Silverman | Review: Awkwafina's 'The Farewell' Is Not The Tearjerker You Might Expect →