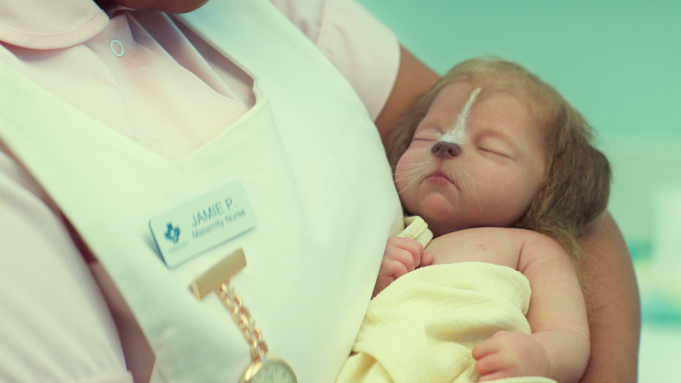 Whether you’re searching for something silly or spooky, something heart-warming or pulse-racing, something family-friendly or utterly deranged, we’ve got you covered with our latest trailer round-up.

The Morturary Collection: On Shudder, now on DVD.

Synopsis: “Set in the phantasmagorical town of Raven’s End, nothing is as it seems … In The Mortuary Collection, a misguided young girl takes refuge in a decrepit old mortuary. There she meets Montgomery Dark (Clancy Brown), an eccentric undertaker with more than a few skeletons in his closet. Montgomery chronicles the strange history of the town through a series of twisted tales, each more terrifying than the last, but the young girl’s world is unhinged when she discovers that the final story…is her own.”

Why we’re stoked: If you dug the movie, the DVD has a bunch of extras to dig deeper. Among them is this behind-the-scenes footage.

Georgetown: Available on digital and On Demand on May 18, debuting in select theaters May 14.

Synopsis: “Georgetown stars Christoph Waltz, Academy Award® winner** Vanessa Redgrave (Julia) and Academy Award® nominee*** Annette Bening (American Beauty). In this thrilling true-crime story filled with twists, turns, and political turmoil Waltz stars as Ulrich Mott, an eccentric and smooth-talking social climber who seems to have everyone in Washington, D.C. wrapped around his finger. But when his wealthy, well-connected, and much older wife (Redgrave) turns up dead in their home, her daughter Amanda (Bening) suspects Ulrich may not be all that he seems as the police investigation begins to uncover a larger deception that goes far deeper than anyone ever imagined.”

Why we’re stoked: Waltz makes his directorial debut with a true-crime tale that has a dark comedic edge.

Blue Miracle: Premieres on Netflix on May 27.

Synopsis: “The incredible true story of Casa Hogar, the Mexican boys home that entered the world’s biggest fishing tournament to save their orphanage.”

Why we’re stoked: Our hearts aren’t made of stone.

Sweet Tooth: All Episodes are premiering only on Netflix on June 4.

Synopsis: “Based on the beloved DC Comic, and Executive Produced by Susan Downey & Robert Downey Jr., Sweet Tooth is a post-apocalyptic fairytale about a hybrid deer-boy and a wandering loner who embark on an extraordinary adventure.”

Why we’re stoked: According to our own Andrew Sanford, the comic is pretty terrific (and it’s available on Comixology’s Unlimited selection!). He notes the teaser’s tone seems lighter than the comics. But hey, with DC killing it with shows like Doom Patrol and Harley Quinn, we’re cautiously stoked.

The Misfits: Coming to theaters on June 11, PVOD on June 15.

Synopsis: “Even a federal maximum-security prison can’t hold Richard Pace (Golden Globe nominee PIERCE BROSNAN), a brilliant international thief. But his daring escape and high-octane car chase, eluding the FBI and police, ends with him being scooped up by The Misfits, a band of modern-day Robin Hoods. Led by the eccentric and charismatic Ringo (NICK CANNON) with Violet (JAMIE CHUNG), the Prince (RAMI JABER), and Wick (MIKE ANGELO) with Pace’s daughter Hope (HERMIONE CORFIELD)— a mysterious group who do devious things for all the right reasons. The skilled group convinces Pace to join them to pull off the heist of the century: stealing millions in gold bars kept under one of the most secure prisons on earth, owned by rogue businessman Schultz (Tim Roth), and used for funding terrorist groups worldwide. Aside from the money, Pace wants revenge against Schultz, the man behind his incarceration. From LA to Abu Dhabi, it will take supercharged engines, forged identities, multiple cons, camels, nitro and massive explosions to succeed. Directed by RENNY HARLIN (Die Hard 2: Die Harder, Cliffhanger), The Misfits brings a new team of outsiders into the world of action-adventure.”

Why we’re stoked: You had us at heist movie.

Synopsis: “Set in a beautiful seaside town on the Italian Riviera, Disney and Pixar’s original feature film Luca is a coming-of-age story about one young boy experiencing an unforgettable summer filled with gelato, pasta, and endless scooter rides. Luca shares these adventures with his newfound best friend, but all the fun is threatened by a deeply-held secret: they are sea monsters from another world just below the water’s surface.”

Why we’re stoked: It looks like Pixar meets Call Me By Your Name.

Peter Rabbit 2: The Runaway: Coming to theaters on June 18.

Synopsis: “The lovable rogue is back. Bea, Thomas, and the rabbits have created a makeshift family, but despite his best efforts, Peter can’t seem to shake his mischievous reputation. Adventuring out of the garden, Peter finds himself in a world where his mischief is appreciated, but when his family risks everything to come looking for him, Peter must figure out what kind of bunny he wants to be.”

Why we’re stoked: Despite some truly dire promos, the first film was a genuine delight! Fingers crossed Will Gluck does it again.

Synopsis: “Sheila Rubin (Rose Byrne) is a quietly tormented housewife in ’80s San Diego, who behind closed door battles extreme personal demons and a vicious inner voice. But things change when she discovers aerobics, sparking a journey toward empowerment and success.”

Why we’re stoked: Rose Byrne is a comedy genius, and she deserves this platform. The aerobics outfits are a bonus.

Synopsis: “From the director Neill Blomkamp of District 9 and Elysium, a young woman unleashes terrifying demons when supernatural forces at the root of a decades-old rift between mother and daughter are revealed.”

Why we’re stoked: District 9 kicked so much ass, we’re willing to overlook Elysium and choose excitement.

← Nature Is Healing As Costco's Free Samples Return | Pull Out Your Black Eyeliner And Leather Pants: 'The World of Darkness' Is Coming To TV and Film →