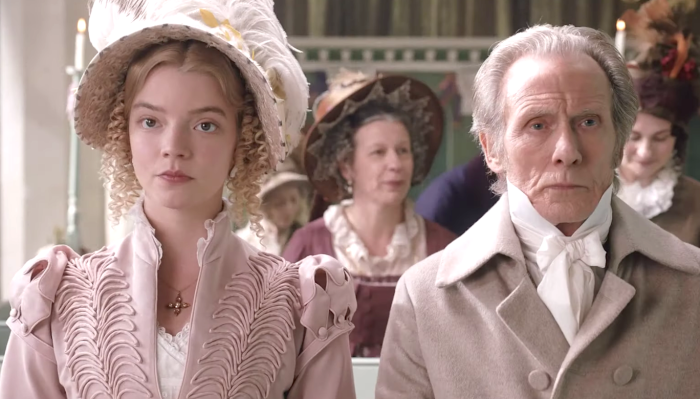 This year has felt really long and, although it’s November and the new year is right around the corner, it’s still hard to start thinking about all the new films that will be hitting theaters in 2020. 2020! It’s wild. However, the new trailer for the “handsome, clever, and rich” Emma is a reminder that period pieces are still very much a thing and that Jane Austen adaptations will never grow old.

One of the most striking things about Jane Austen’s novels is the exquisite (and scathing) exploration of socioeconomic status. Unlike Pride and Prejudice, though, Emma is dripping with comedy. The film’s trailer offers only a glimpse of it too, but it’s enough to charm. Even if you’re not familiar with the novel’s plot, the trailer entertains without giving much away.

In this particular adaptation (and there have been MANY), Emma Woodhouse is portrayed by Anya Taylor-Joy. As the meddling matchmaker in town, Emma is unmatched and the story follows her as she sets people up and falls in love. The trailer only gives us a brief taste of what this young woman is up to and Bill Nighy’s take on Emma’s father, Mr. Woodhouse, is particularly amusing. As this is Jane Austen we’re talking about, expect a lot of wit, charm, and romance, too.

Previous adaptations of Emma have starred Gwyneth Paltrow (you remember the one, don’t lie), Romola Garai, and yes, even Kate Beckinsale. How good it will be honestly depends, as it’s hard to gauge when it comes to Jane Austen adaptations. But, hey, when it’s still cold and dark in February and the joy (or misery) of awards season is still hanging over us like a dark cloud, Emma might be just what everyone needs. Plus, we’re long overdue for a romantic film in February anyway.

Watch the trailer for Emma below! The film hits theaters February 21, 2020.