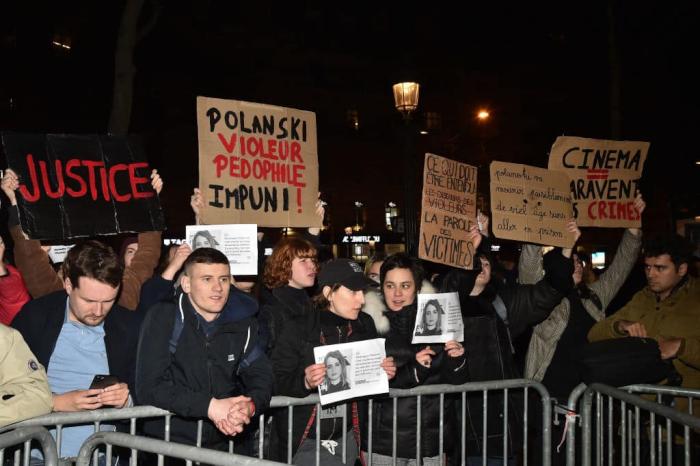 It’s been over 44 years since director Roman Polanski fled America to avoid facing jail time after he pleaded guilty to engaging in unlawful sexual intercourse with a minor. Since 1978, Polanski has lived in France, where he remains and cannot leave the country due to potential extradition to the U.S. to face punishment for drugging and raping a 13-year-old girl.

But don’t worry about old Roman. He’s fine. Since then, he’s made no fewer than 13 movies, won a Best Director Oscar, received many Cesar Award nominations, and been publicly supported by the likes of Martin Scorsese, Wim Venders, Terry Gilliam, Wes Anderson, Isabelle Huppert, and, of course, Woody Allen. Last year, he won his fifth Cesar for Best Director for An Officer and a Spy, which also won the Silver Lion at the Venice Film Festival. Really, Polanski hasn’t been this critically lauded or financially supported since his Chinatown days.

So, it’s sadly no surprise that Polanski has just announced his latest movie. The Palace is described as a drama set in Switzerland on New Year’s Eve in 1999, wherein a group of visitors to a hotel in the Swiss Alps see their lives intersect in interesting ways. The film is being co-written by Jerzy Skolimowski, a Polish filmmaker with his own slate of critical award-winners to his name. The Party is being lead-produced by Italian actor-producer Luca Barbareschi via his Eliseo Entertainment company. Barbareschi was also a producer on Polanski’s last movie.

Boy, cancel culture really works, right? It’s totally not just a jumped-up false-flag defense shield for abusive jerks to wave around when the slightest threat of accountability is directed their way. Really glad we nipped this one in the bud. It would be horrifying if we spent decades excusing an abuser who admitted he did it and heralded him as a tortured genius, thus paving the way for deep-seated toxicity in the entertainment industry that made the very thought of speaking out against the powerful impossible.

Please enjoy this video of Portrait of a Lady on Fire actress Adele Haenel walking out of the Cesars in protest after Polanski won his FIFTH Best Director Award.

← 'We Crushed It.' Officer Breaks 73 Year-Old-Woman's Arm and Laughs About It | On Netflix: The Sci-Fi of 'Stowaway' Doesn't Pass the Sniff Test of an Elementary School Science Fair →