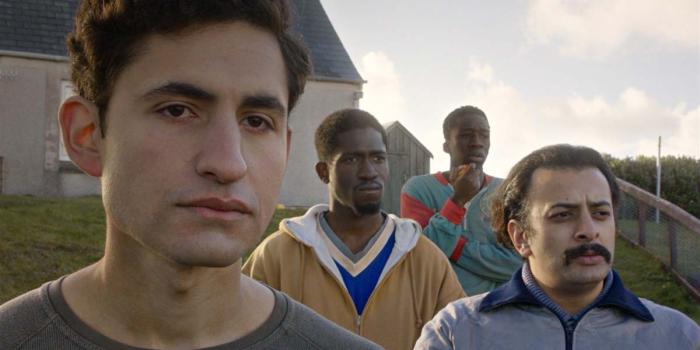 Scotland doesn’t get to make a lot of movies these days. Indeed, our national film industry has always been a small one, limited in scope and resources, and more commonly used by Hollywood studios and the like for scenic backgrounds or kilted hootenannies. It may be 2020 and our ideas of identity more expansive, but the lion’s share of viewers will still hear the term ‘Scottish cinema’ and come to a conclusion somewhere between Brigadoon and Trainspotting. It is dishearteningly rare to see a Scottish story on the big or small screen that doesn’t center whiteness throughout. Aside from our film of the day, I can only think of a small handful of others, including Ken Loach’s Ae Fond Kiss from way back in 2004. In this constricted context, Ben Sharrock’s feature directorial debut Limbo cannot help but feel like a breath of fresh air. A radical one, even. It’s a story of identity, community, and isolation — common themes throughout centuries of Scottish storytelling — that isn’t plastered in shortbread tin clichés or a cheap excuse for flag-waving nationalism.

Omar (Amir El-Masry, who you may recognize from Tom Clancy’s Jack Ryan) is a Syrian refugee hoping to seek asylum in the U.K. While he awaits the results of his application, he has been sent to live on a remote island on the West of Scotland along with three other single men in the same position. The weather sucks, the locals are nosey and culturally tone-deaf, there are no spices in the supermarket aside from mustard, and everyone is bored stiff. Omar, along with Farhad (Vikash Bhai), a Freddie Mercury die-hard fan with an affinity for chickens, and Abedi (Kwabena Ansah) and Wasef (Ola Orebiyi), a pair of endlessly quarreling brothers from Nigeria, spend their days watching bootleg DVDs of Friends and calling their families from the sole phone box on the island. All they can do is wait.

Seeking asylum is a strange purgatorial process, one that is deeply dehumanizing, deliberately so. The refugees in Limbo are fully aware of that and theorize that they’ve been left to rot on this distant island until they snap and return ‘back where they came from’ voluntarily. They live in a derelict house with little furniture and damp seeping across the out-of-date wallpaper. They attend drolly surreal sessions with two officials of sort who teach them the skills to integrate into British society, such as how to dance with a woman at a part or apply for a cleaning job over the phone. The locals are casually racist but still keep trying to befriend them, mostly as fun novelties rather than free-thinking people. The system is cruel by design, a quietly radical reveal of Britain’s increasingly open hostilities towards refugees and asylum seekers, even in the supposedly welcoming nation of Scotland. Even on this barren island, a place of limited amenities with a handful of locals who openly deride their hometown, nobody wants immigrants of any kind there.

What Sharrock captures most acutely is the growing atmosphere of resentment and fear that brews among the refugees in their hovel of a home. They are bored, separate from their loved ones, forbidden to work, or be of use to anyone, and the dark windy nights only make their situation seem like more of an inescapable prison. It’s been a while since I’ve seen a film that so accurately understands the way that Scotland’s picturesque landscapes can seem simultaneously beautiful and utterly horrifying in their desolation. The limited color palette and decreasing levels of natural sunlight cloak Limbo in a feeling of dread.

At the heart of this story is Omar, played to perfection by Amir El-Masry. A Syrian musician who is alone thousands of miles from his loved ones, he is smothered by guilt. His parents live in Turkey while his brother has stayed behind to fight in Damascus, a plight that his father cannot help but laud as the ultimate sign of heroism. His only outlet is his music and the oud given to him by his grandfather, but he finds himself completely unable to play it. Through the clenching of his jaw and the piercing gaze of someone who is simmering in growing bitterness, El-Masry is quietly excellent in a tricky, layered role. It’s the epitome of a breakout performance, although it remains to be seen if British cinema will give him his dues. Also, look out for Borgen actress Sidse Babett Knudsen in a small role, and Scots will immediately grin at the recognizable voice of Sanjeev Kohli in a funny cameo.

There’s a true boldness to Limbo concealed under its seemingly delicate directorial touch. This is a story of people robbed of their humanity by the mundanities of bureaucracy, a system that is operating exactly as it was intended to. There’s no sweeping, weepy finale where the refugees are welcomed into the town with open arms. The system doesn’t change. This is not a world where happy endings are guaranteed or even much of an option for those who so desperately need and deserve them. Its quietness and subtlety, peppered with deadpan humor, make it no less affecting. Let’s hope this signals a sharp new age of Scottish cinema. We desperately need more movies like this. 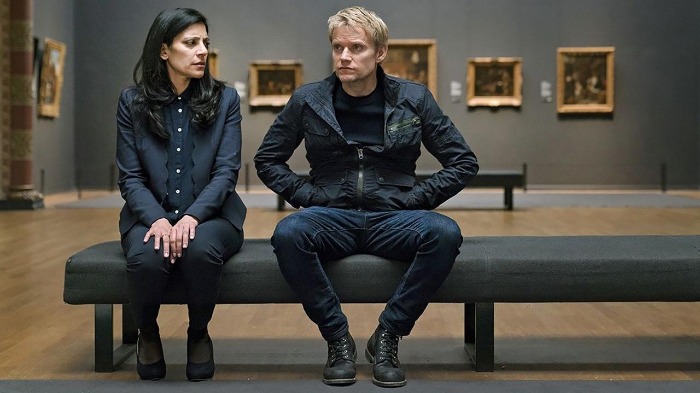 Some Dutch Courage to Face the Coming Week