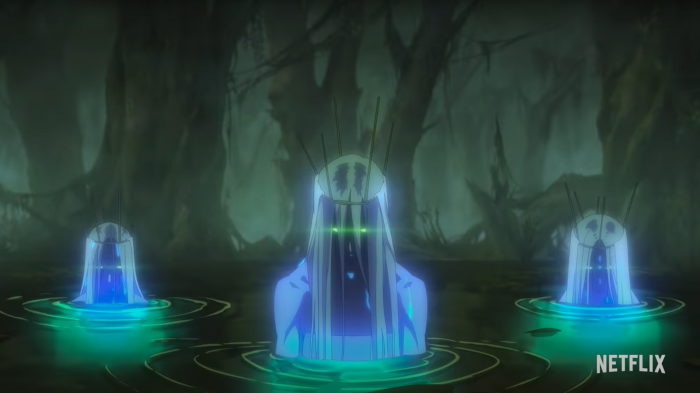 Theo James Makes a Case for the Bland White Voice Actor in 'The Witcher: Nightmare of the Wolf' on August 23.

Pajiba’s had a number of things to say about the Bland White Actor over the years. Like, a bunch of them. You know who I mean. Sam Worthington. Jai Courtney. Scott Eastwood. One of my particular favorites is Theo James, about whom Dustin once said “[he] looks like James Franco if James Franco were much better looking.” They’re fine actors, in that they can say their lines with a face so straight it might as well be made of oak. They stand ready to staunchly support a young woman facing adversity in a PG-13 dystopian future. They’re prepared to get killed in the first 15 minutes of any movie requiring a revenge arc. And when you want a leading man with the looks of Ryan Reynolds but can only afford the emotive range of his shoe, they’re your first call.

But Theo James has found a solution. He has a period piece called Mr. Malcolm’s List coming out later this year, and for some inexplicable reason they’re doing a TV version of The Time-Traveler’s Wife, because the movie wasn’t painful enough. But more importantly, he cracked the voice acting code. Sure, he’s blandly handsome but he’s only got the one face (and one expression). But he’s got a fantastic voice. The right tone, the right accent, and though his lines in Castlevania were a bit wooden at times, he did an overall great job as Hector. Now he can be any vaguely foreign white dude! Castlevania certainly demonstrated you don’t need to be in animated England to use an English accent. In The Witcher: Nightmare of the Wolf he plays a young version of Vesemir, the Witcher who trained Geralt. Battle-hardened and ancient by the time he forced Geralt into the life, the child Vesemir joined the Witchers of his own free will to escape a life of poverty. Happy to be paid in coin, wine, and women he avoids his greater responsibilities until what it means to be a Witcher in a world of superstitious peasants catches up to him.


James is joined by Lara Pulver, who played Irene Adler on Sherlock; the incomparable Mary McDonnell from Battlestar Galactica and, well, everything; and Graham McTavish, who has the word “intimidating” encoded in his very DNA. Animated by Studio MIR, the same group behind The Legend of Korra and Voltron: Legendary Defender, this latest animated feature from Netflix drops August 23.

← Substantial Changes Take a While; Plan Accordingly | The Great Bird Bamboozle: Birds Aren't Real And Finding Truth on the Internet →