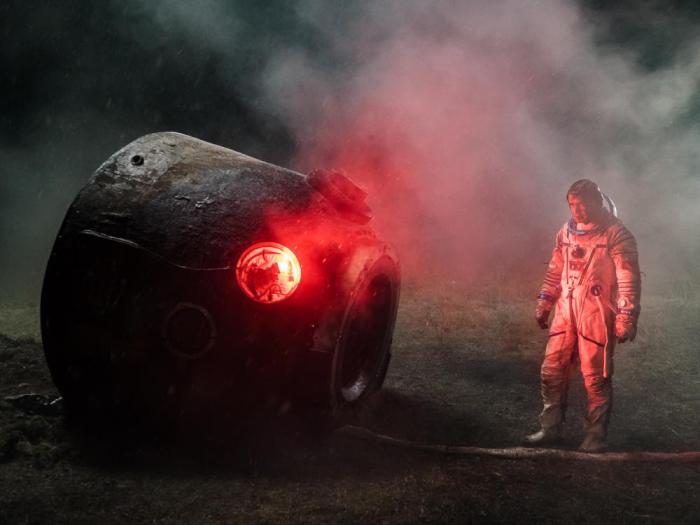 The Monster Of 'Sputnik' Is Reason Enough To Watch

There’s a delicious, raw thrill to letting out a scream you didn’t feel coming. The way your throat rattles with it, your jaw hangs involuntarily open to allow it to rush past your lips. The ring of it in your startled ears, the rush of adrenaline it leaves in your very veins. This is dark thrill found in the second act of IFC Midnight’s latest release, the savage and sensational Sputnik.

Directed by Egor Abramenko, this Russian-language horror movie begins in space, 1983. Floating in an abyss of stars, planets, and the unknown, two cosmonauts converse about what they miss of Earth. Their mission is very nearly over, they’re in the pod that will return them to Mother Russia’s sweet embrace. But then, there’s something just outside their window. Lurking. In outer space.

The shrewd script from Oleg Malovichko and Andrei Zolotarev declines to reveal what happens next, leaping to crash site splashed in carnage, then a far off conference room where a stoic doctor is being interrogated. Dr. Tatyana Klimova (Oksana Akinshina) is read the riot act for nearly drowning a patient to cure his confounding condition. This earns her no friends at the review board, but catches the eye of Colonel Semiradov (Fedor Bondarchuk), who needs such a sharp-minded risk-taker to help him with his recently returned cosmonauts.

The bulk of Sputnik takes place in a remote research facility, where Tatyana plays scientist, detective, and spy as she tries to uncover not only what’s wrong with Konstantin Veshnyakov (Pyotr Fyodorov), but also what’s being kept from her by the lab’s snarling head scientist (Anton Vasilev).

This is a sci-fi movie with an alien monster. However, Sputnik isn’t an extraterrestrial slasher like Alien. It’s far more slow-burn and enigmatic, unfurling stories past and present with a patient unfurling that invites audiences to take in the chilly atmosphere and smoky intrigue. Akinshina shoulders this pace with a cool swagger. Her eyes ever alert, hinting at the gears turning behind her stern expression and the empathy warm within her pounding heart. This is a film of steely glances and stern dialogue punctuated by bursts of blood. It’s moody and intoxicating, and then there’s that monster.

I urge you not to spoil yourself by Googling this otherworldly critter. Allow yourself the pleasure of surprise. Though perhaps expected, its entrance is strange and sickening. Its form familiar yet alien. Slippery and sinister, it looks like the creatures featured in videos about wild animals found deep in the darkest jungles or the depths of the deepest oceans. It is a gnarled nightmare spun in slimy flesh. Its movements are primal yet sophisticated.

Unlike the man-eating beast of Jaws, Sputnik allows you plenty of time to stare openly at its monster. In these moments, the film slyly binds us to Tatyana, who is just as transfixed by its mysteries and potential menace as we are. Like her, we want to know all about it. We want to get close. We want to step beyond the glass that keeps us safe and perhaps run the blade of a finger down that winding spine, just to know the feel of it. All the while, knowing that such a tactile desire could spell disaster!

If you’re hungry for fresh horror, I highly recommend Sputnik. I recommend it for its rich storytelling, which uses the Cold War’s backdrop as a suspenseful setting for a tale of humanity in the face of uncertainty and horror. I recommend it for the tight performances that treat every perturbing plot twist with a grounded yet striking reaction. I recommend it for its near-sadistic slow burn, which pulls you in, a fly spun in a spider’s thread, until your heart is in your mouth, your lungs desperate for relief of a fresh breath. But most of all, I recommend Sputnik for its monster, which will slither then stalk and snake into your brain. There, it nests as a haunting reminder not only of all the violence, wonder, and horror this film contains but also of what else might lurk beyond the stars.

Sputnik is now in select theaters, available on Digital and Cable VOD.