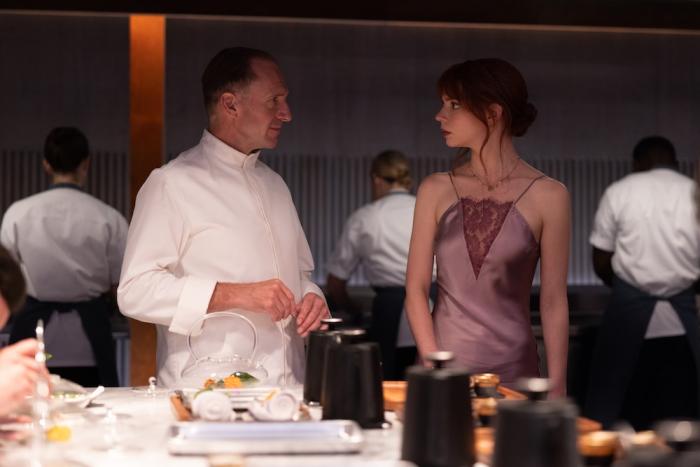 'The Menu' Is Food Snob 'Succession' ... Until It All Goes Deliciously Sideways

Something I’ve come to appreciate about HBO’s Succession is the way it catalogs the sins of exorbitantly wealthy media elites in a way that offers them enough nuance for sympathy without redeeming them or letting them off the hook for their awfulness. You may come to feel sorry for the Roys as their layers are peeled back over the seasons, but you never have to forgive them. You may even find yourself rooting for them, but you never condone them.

So what does all of this have to do with The Menu, a darkly comic satire that skewers the art and culture of fine dining, you may wonder? Well you see, the film also happens to share that exact same quality of presenting terrible characters in a manner that offers them sympathy without begging for forgiveness — and with good reason. Its director, Mark Mylod, is an executive producer on Succession and has helmed 13 episodes of the hit series, while one of the film’s writers, Will Tracy, was a staff writer on the show’s second season (Tracy and his writing partner, Sam Reiss, both hailed from The Onion, and Reiss himself is an Emmy-nominated writer on Late Night with Seth Meyers, so there’s plenty of pedigree to go around). Of course, the defining characteristic of Succession is that there are no lasting consequences for the obscenely rich and privileged, whereas The Menu is pretty much all about consequences. Deadly ones. That’s what makes it a satire!

In a set-up worthy of Agatha Christie, 12 strangers board a boat to a remote island that houses one of the world’s best and most exclusive restaurants. Hawthorn is the brainchild of Chef Julian Slowick (Ralph Fiennes), and for his special guests this evening he’s prepared an unexpected tasting menu, the theme of which will become clear as the courses progress. All he promises is that “You will eat less than you desire, and more than you deserve.” Chef runs his restaurant almost like a cult; His staff lives on the island, waking at the crack of dawn to tend the crops and smoke the meats and fish the seas for the ingredients that make up each meal, and they seem happy for the privilege to do so. Mealtimes offer Chef a chance to stand at the pulpit of his dining room and lecture his patrons on the nature of his cuisine and how they shouldn’t merely eat it but taste it, savor it, experience it. But are the guests true believers as well? Hardly.

These 12 customers begin the movie as nearly one-note caricatures of the sorts of hoity-toity folks you’d see in any respectable fine dining establishment that charges as much for a single meal as a whole Caribbean vacation, each with a single defining characteristic and little else. There’s the renowned food critic who first championed Chef (Janet McTeer), dining with her pushover of an editor (Paul Adelstein). There’s the wealthy couple that makes a point of dining at Hawthorn on the regular for no other reason than to prove they can — despite the fact that they barely register the cuisine (Judith Light and Reed Birney). There’s a washed-up actor (John Leguizamo) trying to pivot his career into a food travel show, having a working dinner with his assistant (Aimee Carrero). Three tech bros, whose boss is Chef’s financial backer, have used their connections to secure a table for clout more than culinary interest. Chef’s mother is drinking alone in the corner. And finally, there’s the requisite foodie, Tyler (a chipper Nicholas Hoult), who idolizes Chef and has waited for years to dine at Hawthorn but whose eagerness borders on the disrespectful. Unfortunately, Tyler’s date, Margot (Anya Taylor-Joy), is unimpressed by this whole pretentious excursion, and even worse — Margot isn’t the date Tyler RSVP’d with in the first place.

This is the first real sign that everything at Hawthorn isn’t as it seems, as Hawthorn’s general manager Elsa (Hong Chau) is not just concerned at this last-minute change of plans when Margot steps off the boat, she’s flustered. Upset, even? Front-of-house staff at restaurants of this caliber don’t get flustered, or at least not in any way that would be visible to their patrons. Her reaction, subtle though it may be, screams that this is Not Going According To Plan — and is our first hint that there’s more riding on this dinner than simply a good time. Speaking of ominous, I have to give a quick shout-out to the location and set design of the movie which thwarts expectations at every turn. The exclusive island getaway is a harsh, grey landscape of driftwood, and the Hawthorn itself appears like a bunker — a squat modernist (brutalist?) box jutting from the landscape. Even the doors, swiveling slabs, read more as gates to keep things in than to let things out.

The Menu lives up to its title as the film unfolds not in chapters but in courses, from the amuse-bouche served to the guests on the boat ride through to the climactic dessert. Each course works as a believable piece of art, a technical marvel, but also provides hints as to Chef’s overarching theme for the dinner — and escalates the tension accordingly. The second course, a breadless bread plate made of nothing but spreads, speaks to the fact that bread has long been a staple food for the working and impoverished — but the patrons of Hawthorn are neither, and do not need bread. The next course, about memories, laser prints the secrets of the guests on tortillas. On the surface Chef has made a meal of class warfare, but it’s also deeply personal. He’s not here to eat the rich figuratively but to get revenge on these particular rich people who have done him wrong. Tonight’s dinner is all about the givers and the takers, the servers and the served, which makes the mystery of Margot all the more pressing. Where does she fit in with his concept? On which side does she belong?

It would have been so easy for The Menu to be a straight horror film, devolving into a literal eat-the-rich cannibalism scenario, or to err toward a more laugh-out-loud brand of comedy at the expense of the elites. Instead, Tracy and Reiss have crafted a precise tightrope of absurdity that owes everything to accuracy. The movie gets haute cuisine right, from the execution of the food to the culture of the staff and the patrons. It’s all there, from the Busby Berkeley choreography of the servers delivering plates just-so to the quiet command of Chef — the writers just dialed it all up to 11. Still, when Chef reveals to Margot his “us vs them” ideology built on the slights he received from his guests, my first thought was, “Well, that happens in any restaurant.” Customers behave like entitled trash to servers no matter how expensive the food is (even if they’re not James Corden). You could tell that story in a Starbucks if you wanted! What makes this story unique is that, by setting it in the world of fine dining, the power balance shifts a bit more toward the kitchen’s favor — and so do the sins.

The progression of courses doesn’t just illuminate the guests but the operations of Chef’s kitchen as well, and we see that they are not merely undervalued artisans. There’s mediocrity, there’s sexual harassment, there’s obsessive devotion and violent outbursts. Even Chef’s grievances are, in some cases, downright petty (the actor, for example, made a bad movie that ruined Chef’s one day off), but mostly he’s just mad at people who have the privilege to experience his food but lack the ability to truly appreciate it. He doesn’t seem to recognize that, in the restaurant world, his status is its own level of privilege. He’s an elite taking aim at elites, which only adds to the absurdity. That influence Chef has ripples into his dining room, as his guests — who slowly realize they are in danger — fail to effectively fight back. They’ve never had to before, and can’t comprehend this reversal of their fortunes. There’s a code of conduct in a fancy restaurant that’s so ingrained in them, they even throw their credit cards down to pay while knowing their lives are at stake.

Perhaps the highest compliment I can offer The Menu is simply that I haven’t been able to stop thinking about it. The film is as well executed and as emotionally distant as the very food it depicts, but all the focus on the givers vs takers may distract from something else Chef admits, that these guests represent the ruin of his art. So what is culinary art? It’s a unique two-fold discipline, of food preparation and of service. There’s a reason a fancy restaurant puts as much emphasis on the front-of-house experience as the talent in the kitchen! Many art forms could, theoretically, exist without an audience. You can write for yourself, or play music for yourself (even if the history books wouldn’t remember your artistry). But if you’re cooking for yourself, is it art? Or does the art of cooking come specifically from it being shared? What The Menu captures — hinges on, in fact — is the one thing that sets food apart from any other art form: The ability to send it back to the kitchen. You can’t send a painting back to the gallery or a song back to the artist, you can simply choose not to spend your money there in the future. But the success of food exists entirely on the tongue of the audience. Even the most expensive, elaborate, and exclusive dish can be refused if it doesn’t satisfy the customer. It would be easy to make a satire of class struggle set in the art world, since too often people perceive art as a luxury in and of itself. I think most of us here agree that art is in fact necessary for a fulfilling life, but still — food is a necessity OF life. Margot, herself ultimately a member of the service industry, is keenly aware of these distinctions, and what she reminds Chef in a pivotal moment that is just clever and sentimental enough to be satisfying is that what truly makes food art is the pleasure that can be derived from it.

The Menu is in theaters now.

← Episode 11 Recap: Someone Got 'Star Wars' All Over My 'Andor' | 5 Shows After Dark: 'The Walking Dead' Series Finale AMC, 'The White Lotus' on HBO →