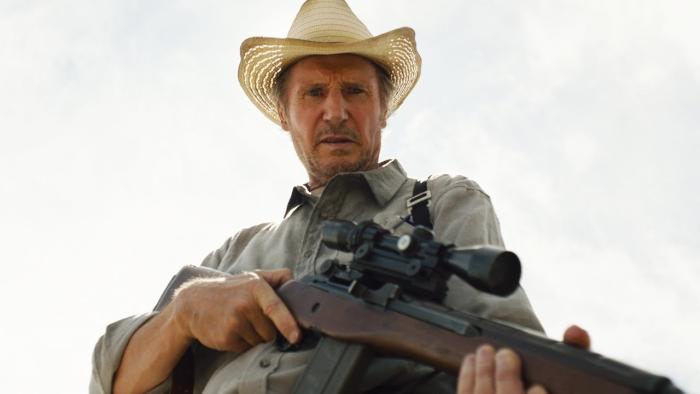 In Theaters: 'The Marksman' Is Meat and Irish Potatoes

Last week, if I’d watched The Marksman — a movie about a down-on-his-luck widower helping an out-of-status kid escape a Mexican cartel and the border patrol — I’d have instinctively tried to unpack the politics of the movie. But this is the Biden era, and despite the movie’s setting — along the Arizona/Mexican border — The Marksman almost defiantly refuses to take a political position, and I have no desire to try and impute one.

And yet The Marksman is not entirely bad, either. The dialogue is spare; Neeson is suitably grizzled; the bad guys are the Mexican cartel and the Border Patrol agents; it all unfurls in an almost comfortingly predictable way. Neeson’s character, Jim, isn’t really a good guy or a bad guy, either. His actions are heroic, but he is no hero. He’s an Eastwood character, a guy who is broke and tired and trying to do the least to maintain some dignity and self-respect. That’s exactly what he does, and then the movie ends.

Jim is a widower living on a ranch near the border in Mexico. He hasn’t been able to pay his mortgage, so the bank is threatening to foreclose. Meanwhile, Miguel and his mother, Rosa, are crossing the border from Mexico, trying to outrun the cartel, which wants to kill them on account of their father/husband stiffing the cartel for some unspecified reason. The cartel is bent out of shape about getting revenge, long after killing the husband/father.

Jim is driving by when Miguel and Rosa cross the border, and his first instinct is to call Border Patrol and get them some help because Jim is dumb and ignorant enough to believe that Border Patrol will help them. However, several cartel members arrive shortly thereafter, and Jim’s not going to just let them kill a kid and his mother. He pulls out his rifle, and a shootout commences. When it’s over, the brother of the cartel leader is dead, and so is Rosa, leaving the kid, Miguel, in the care of Jim, who probably just wants to put in a hard day’s work and drink a beer before falling asleep.

Alas, Jim has made an enemy of the cartel, and Miguel needs to be transported to his family members, and so the bulk of The Marksman is a road-trip film where Jim is being chased by — and has to fend off — the cartel, as well as Border Patrol agents who are trying to deport Miguel. Given the title of the movie, I don’t think it’s a spoiler to say that there are a lot of shoot-outs along the way, although it is important to again stress that these shootouts are not in any way exciting. They are relentlessly perfunctory.

The same can be said for the rest of the movie, too, which also stars Katheryn Winnick, and comes from director Robert Lorenz, who turns in a solid C+ movie. It’s watchable, but not in any way necessary.

← Review: 'Our Friend' Is Terrified Of Its Own Source Material | 5 Shows After Dark: 'The Stand' on CBSAA, 'Walker' Premiere The CW →