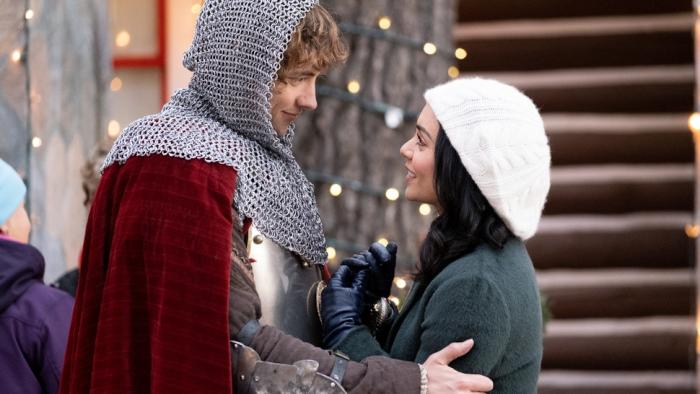 The 21st century meets the 14th century in the first trailer for The Knight Before Christmas, Netflix’s latest Christmas romcom that looks nothing like The Princess Switch, though it does also star Vanessa Hudgens. Cynical Brooke (because they’re always cynical), believes knights in shining armor and living happily ever after don’t exist in real life, only in fantasy. She’s in for a rude awakening, of course, when she hits her very own knight in shining armor, Sir Cole, while driving her “steel steed”.

Not only does The Knight Before Christmas look like a decent Christmas movie (sorry A Christmas Prince: A Royal Wedding, you tried), but it also involves the magic of time travel, which is a great plot device for building romances in holiday films. Just ask The Spirit of Christmas.

In fact, The Knight Before Christmas actually reminds me a lot of the Hugh Jackman and Meg Ryan romcom, Kate and Leopold. A dashing and chivalrous man somehow time travels to the present and meets the woman he’ll fall in love with, so forth and so on. Yup, the magic of Christmas might win me over on this one.

Vanessa Hudgens is also starring in the Netflix sequel to A Princess Switch, which will have not one, not two, but three different doppelgangers… for reasons I’ll never be able to explain.

The Knight Before Christmas also stars Josh Whitehouse and premieres on Netflix on Thursday, November 21. Watch the trailer for the movie below! I dare you not to smile while watching.

← Netflix CEO Explains Pulling 'Patriot Act' Episode in Saudi Arabia | Ahead of Its Season Finale, It's Time To Ask: Is There a Point to 'AHS: 1984'? →