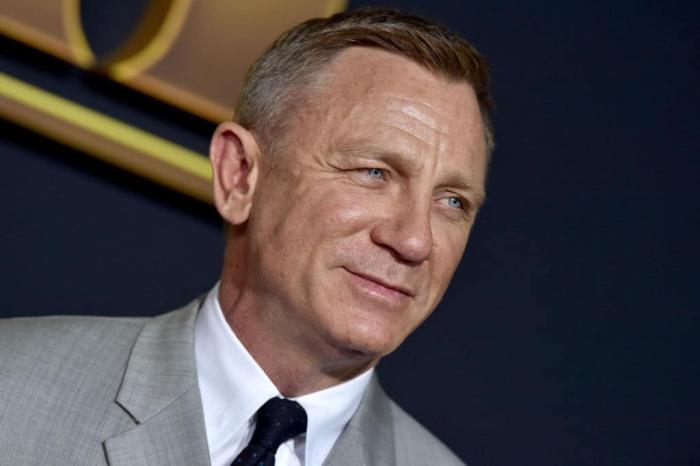 Technically, we are still living in the age of Daniel Craig’s James Bond. His fifth and final turn as pop culture’s most iconic spy, No Time To Die, will be released next year, however, it’s safe to say that Craig has been inching towards the exit for a while now. He’s never phoned it in while playing 007 but with each new extensive and exhausting promotional tour, Craig has been remarkably candid about the toughness of the job and the overtly-deified status placed upon the shoulders of this beloved character. Remember, this is the guy who said he would rather slash his wrists than do another Bond movie. Watching Craig promote a new, non-Bond movie often feels like watching an entirely different man at work.

With Knives Out, the latest film from director Rian Johnson, Daniel Craig is finding his post-Bond niche outside of the franchise world. In the Agatha Christie-style whodunnit, Craig plays detective Benoit Blanc, a Poirot-esque figure with an eye for detail and a tin ear for metaphor. Hired by a mysterious benefactor to investigate the death of crime writer Harlan Thrombey, Blanc interrogates the array of grotesques in the late author’s immediate family and pieces together the most elaborate of cases. Craig rightly landed a Golden Globe nomination for his performance in Knives Out, which may be my comedic performance of the year. He’s genuinely hilarious in the role of Benoit Blanc, a deliberately ludicrous creation who Craig somehow manages to keep grounded in reality even as he speaks with the most obviously fake of Foghorn Leghorn inspired Southern accents. Craig takes the role just seriously enough but not so much that he never seems in on the joke. If signing on to Knives Out was a deliberate choice by Craig to extract himself from post-Bond typecasting then it’s paid off marvelously. However, I’m not so sure it was that calculated a decision.

Take a look at the films Craig made before his first Bond movie, 2006’s Casino Royale, and you’ll see the back-catalog of a jobbing actor with character work as a driving focus. Craig did a bit of everything, from period dramas like Elizabeth to gangster movies like Layer Cake and fascinating indies like Enduring Love. There are a few Hollywood blockbusters in there too, like the first Tomb Raider movie, one of my personal guilty pleasures, and Oscar baity biopics such as Sylvia, where he played the poet Ted Hughes. Before being cast in that role, Daniel Craig was probably the kind of actor whose distinctive face you recognized but may not have been able to pin down to a specific project. He was that guy, one of many ‘that guys’ in a business buoyed by the bit-part workers seldom getting their dues. Crucially, Craig was acclaimed. He received acclaim for various roles and was often singled out in less-than-stellar films for his performances. He wasn’t typically seen as the kind of guy who could headline a movie through sheer star-power alone.

And then along came Bond. It’s easy to forget, but in 2005, when Craig’s casting was announced for the first James Bond movie in four years and the beginning of what would essentially be a franchise reboot, the outrage was fierce. I remember being on various movie forums during that time and seeing the same handful of posters screeching about what a betrayal it was to see a blonde man with a craggy face who was only, shock horror, five-foot-ten-inches in height take on their beloved 007. People threatened boycotts of Casino Royale because Craig wasn’t seen as tough enough, charming enough, handsome enough to embody the ultimate dream of fetishized masculinity. Craig seemed too serious and not fun enough for Bond, but that wasn’t what the producers wanted from a new Bond. They craved something more grounded and character-based than the parody of a one-linger spewing pervert that he had become. The Broccoli family needed Bond to be tough again, to be the one-man killing machine that fell in line with contemporary blockbuster tastes. Enter Craig, who remains my favorite Bond for a reason.

Craig, arguably more than any Bond actor before him, keenly understands how much James Bond sucks. Sure, he’s good at his job in a ruthlessly emotionless manner, but he’s also a broken rich kid who is used to getting his own way and rarely seems to be the good guy, even if his intentions are in the right place. Craig was insistent that Bond’s dark side be explored in his films, in part because it seemed silly to tell the story of an assassin and not focus on the darkness required to do such a cruel job. More importantly, Craig gets that Bond is, as he described him, ‘actually a misogynist.’ He’s kind of a sex pest who discards women in nasty ways, or the world does so for him in manners of violence so disturbing that the films seldom linger on those consequences. If you f**k James Bond then there’s a solid chance you’re going to die (and that doesn’t even get into the oft-discussed fan theories of his sexual health — James Bond is probably riddled!) When Craig’s Bond has true feelings for a woman, like Vesper Lynd or, of course, M, you feel it. When he’s simply using them for a good time, the coldness of that is evident, even if the moment itself is steamy (see the arc of Agent Fields in Quantum of Solace.) Bond, as played by Daniel Craig, is a fascinating contradiction of fantasy and reality, one that works best in films where the director and writer understand that which is why I consider Skyfall the peak of Bond. Really, Craig is just doing with this character what he’s always done with his career. This is a job and he’s working at it.

Craig’s work in-between Bond films is a lot more high-profile than his pre-Bond movies — blockbusters like The Adventures of Tintin, The Golden Compass, and Cowboys & Aliens stand out — but there are also those smaller character-based titles that he was doing long before he donned the tuxedo. Granted, they’re not as plentiful as before, but the spotlight of A-List stardom hasn’t detracted from the stuff that he always found interesting. That celebrity and the accompanying money probably help him in those endeavors. The chances are that Craig could retire now from the Bond money and never work again, but then we wouldn’t get the sheer unabashed fun of roles like Joe Bang in Logan Lucky or Benoit Blanc, two performances where he’s willing to go far sillier and stupider than before. Even pre-Bond, he was never really silly, possessing the face of character rather than comedy. Doing the latter after close to fifteen years as the most dashing man in Britain almost feels rebellious and we appreciate it more because we’ve seen those stony-faced roles dominate his work for so long. A post-Bond Daniel Craig is a man with freedom, although it seems that he may be keen to return to business as usual. Either option works.